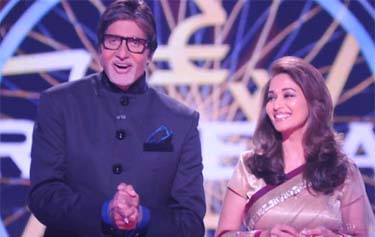 All is well that ends well and this fits well with Kaun Banega Crorepati season 4 on Sony Entertainment Television which concluded yesterday. The finale has scored more than the opening episode on the people meter.

The overnight rating agency aMap has given 5.5 TRP to the finale while on the same meter, it opened at 5 points. The fourth season of KBC kicked off on 11th October 2010 with the return of Amitabh Bachchan as the host of the show.

The KBC-4 finale show was aired from 9:00 pm to 10:48 pm and during that timeband the show outperformed all the channels. aMap has given Colors 2.9 points during 1.48 hours while Star Plus and Zee TV managed to get 2.3 and 2.1 points respectively.

Sony is replacing KBC with its flagship dance reality show Jhalak Dikkhla Ja from coming week which will feature Madhuri Dixit as the judge on the show.