Uses print, digital and out of home media across six major cities for two months. 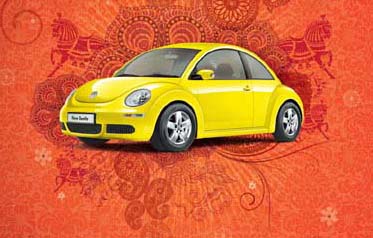 Uses print, digital and out of home media across six major cities for two months.

Marriage does come with its rewards: – is the tagline for the just launched New Beetle campaign.

With the beginning of the wedding season Volkswagen communicates the icon as an ideal gift for this special occasion.

Talking about the new campaign, Lutz Kothe, Head of Marketing & PR, Volkswagen Passenger Cars, Volkswagen Group Sales India Pvt. Ltd. said, “The Beetle has been able to trigger emotions like no other car has been able to for decades and it continues to do so across the globe. It is more than a mere car, it is a timeless gift that anyone would love to give to their loved ones and what better occasion than marriage.

The New Beetle campaign tries to draw exactly that, he concluded.”

The New Beetle combines long lasting engineering excellence with urban sophistication and timeless good looks and Volkswagen aptly reverts with this campaign to customers who are about to begin a new phase in their life.

The campaign can be seen in print, online and digital and out of home media across six major cities: Mumbai, Delhi, Bangalore, Pune, Hyderabad, Ahmedabad and Hyderabad and will continue until middle of January next year.