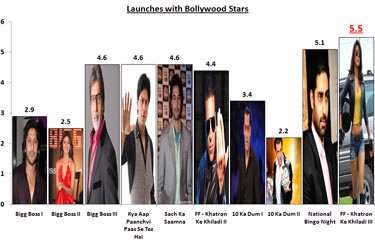 Colors has been able to take its GRP cross 300 again with 314 GRPs according to TAM Week 37 data. Last week the premier Hindi entertainment channel had 267 points GRPs. This jump in overall GRPs has got a huge contribution by popularity of bollywood’s beauty Priyanka Chopra who is hosting the flagship show Fear Factor Khatron Ke Khiladi-3 from the house of Colors.

KKK-3 has got a phenomenal opening week’s rating of 5.5 TVR, beating the last two seasons by Akshay and any other celebrity reality show on COLORS, according to the TAM Week 37 data.

The launch episode saw a 26% jump in ratings over last year, the TVR last year was 4.4. The channel also saw an increase in overall reach, from 18.4% reach last year to 19.2% this year.

Also this is the highest launch for a Bollywood star since 2008.  (Refer the graphs below; Source: TAM Data- Week 37)

According to Rajesh Kamat, CEO COLORS & COO, Viacom 18, “After two successful seasons of  Fear Factor - Khatron Ke Khiladi,  we are encouraged by the overwhelming viewer response to the third season. The exceptional show rating which is higher than the earlier two seasons indicates that the content and the format have been accepted well by viewers. We have taken the show to the next level in terms of scale, credibility and delivering value to our advertising partners”.

Reacting over the viewers’ response, Priyanka Chopra, Host of KKK X3 said, “I am absolutely delighted with the response that Khatron Ke Khiladi x3 has received.  What makes the news more exciting is the fact that the show has not only garnered a fabulous opening but has had a consistently high viewership over the whole week, which is very encouraging for me.  This is my maiden television foray and I am grateful for all the support I have received so far.  KKK x3 has only just begun and I can promise a huge amount of excitement, fear and fun over the remaining episodes.  It's been an absolute pleasure working with the team at Colors and Endemol and I hope that the audience continues to appreciate all the effort that we have put into Khatron Ke Khiladi x3!"