Zomato zooms past Swiggy on major metrics, according to the market intelligence report. While Swiggy was an advertiser during IPL 2022, Zomato stayed away from it 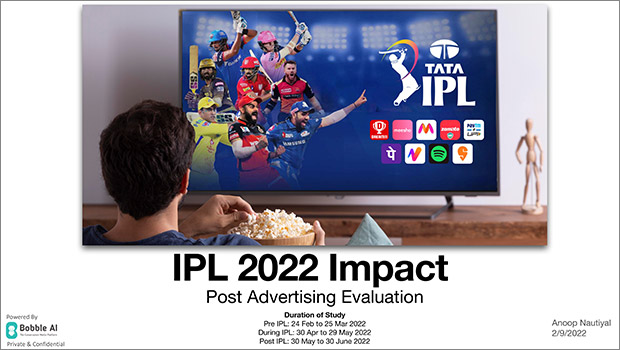 PhonePe has surpassed Paytm in the advertising war during IPL (The Indian Premier League) 2022 by leaving behind its rival in all sorts of user acquisition, engagement and transaction parameters, according to a data report by  Bobble AI – the AI-powered Conversation Media Platform which conducted a study to discern the actual impact of advertising on brands during the IPL mapping it’s over 80 million Android smartphone users’ behaviour.

Conducted in a privacy-compliant manner by Bobble AI’s Market Intelligence division, the research used first-party data from its vast Android smartphone user base of over 80 million. The report reveals several interesting insights into the major advertisers during IPL 2022 among app-based brands. Bobble AI’s report highlights different parameters around app usage by mapping the smartphone user’s behaviour while using a wide range of applications for different purposes such as Dream11, Meesho, Paytm, PhonePe, Spotify, Swiggy, and Tata Neu.

Tabrez Alam, Chief of Business Strategy, Bobble AI, said, “The IPL is one of the most-awaited sporting events of the year for brands and with good reason. Advertising during the IPL skyrockets, giving brands a significant amount of reach to their existing customers and target audience. When we conducted the analysis this year, we found some interesting insights, like Zomato and PhonePe surpassing their competitors Swiggy and Paytm in almost every category, including the overall market penetration. Since the pandemic, online platforms have gained steady ground, indicating the goldmine of potential these markets have among consumers. It’s likely that these trends will prevail for the foreseeable future.” 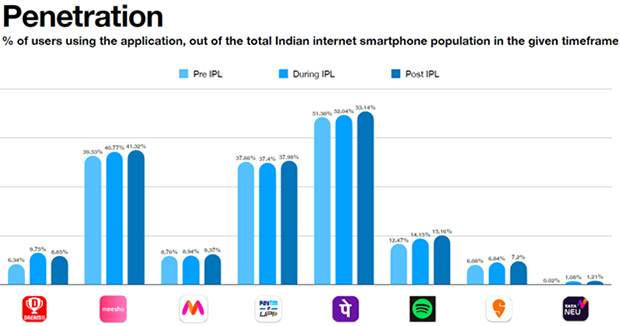 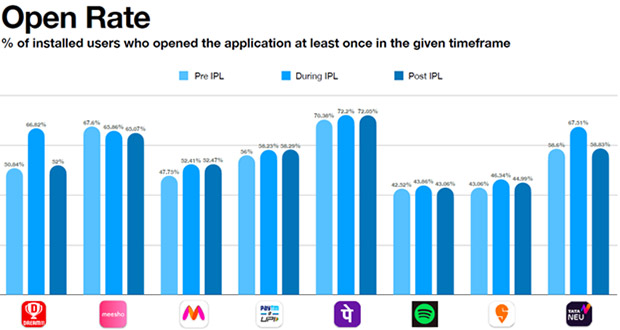 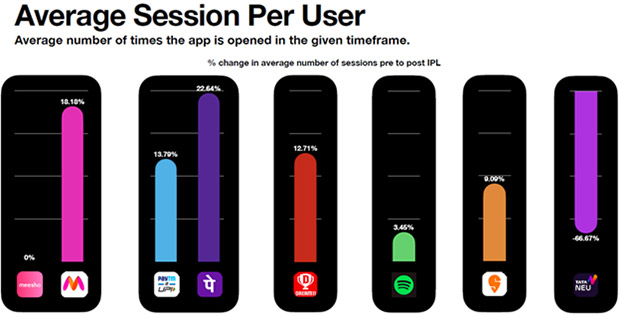 Bobble AI’s Market Intelligence report shows that most of the applications gained in terms of average session per user (ASU) except for the Tata Neu app. The Tata Neu application’s ASU reduced significantly by 66.67%. An increase (by 22.64%) in the Average Session per User (ASU) for PhonePe was higher than Paytm (increase by 13.79%). There was no change in ASU for the Swiggy app. 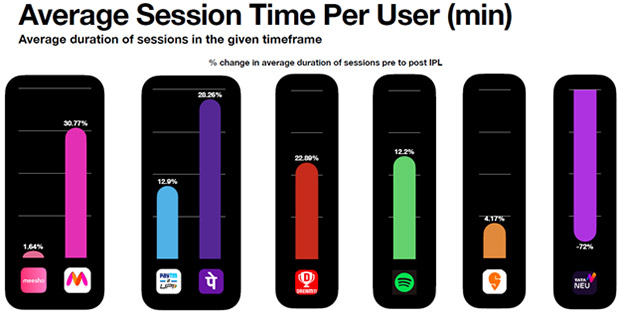 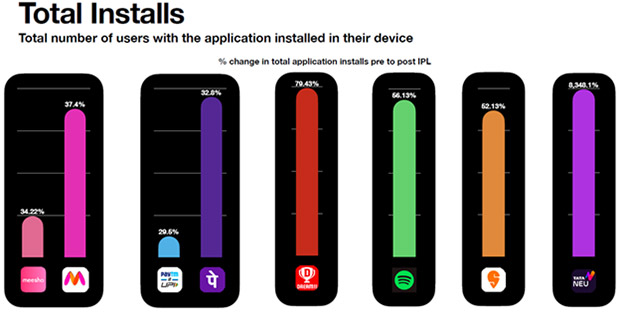 Then, we look at the change in the proportion of new installs (NIs) from the pre-IPL to post-IPL phase. Bobble AI’s report showed that apps saw a significant increase in new installations. Among shopping apps, the increase in NIs was more than 25 times for Myntra (110.84%) against Meesho (4.72%). In the fintech space, Paytm (53.03%) performed marginally better than PhonePe (52.24%). 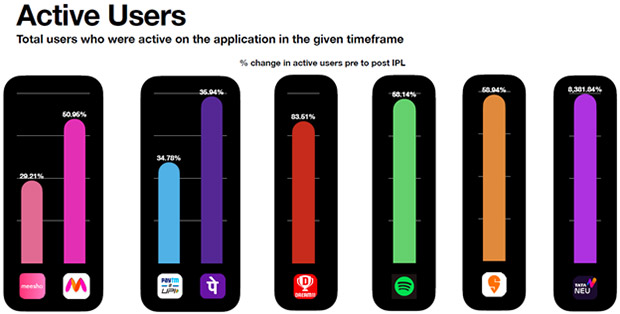 The Bobble AI marketing intelligence report analysed the active users (AUs) on the apps. The data shows that AUs have increased for all the apps. Dream11 saw an 83%+ increase. Among shopping apps, the increase for Meesho’s (29.21%) AUs was substantially less than Myntra's (50.95%). PhonePe (35.94%) edged Paytm (34.78%) for AUs in the fintech industry.

The figure below shows that the churn rate of all the apps except Tata Neu (increased from 59.25% to 76.61% from pre-IPL to during IPL, and then reduced to 75.86% post IPL) decreased during the IPL period and increased after that. The pattern around the churn rate was similar across the categories except for FinTech, where the decrease in the churn rate of Paytm (from 38.6% in pre-IPL to 33.78% in post-IPL) was lower than PhonePe (from 26.14% pre-IPL to 22.75% in post IPL period). 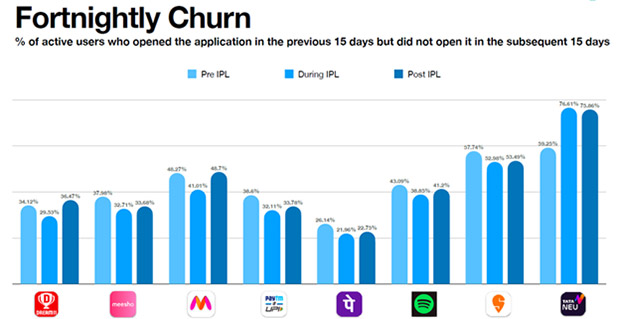 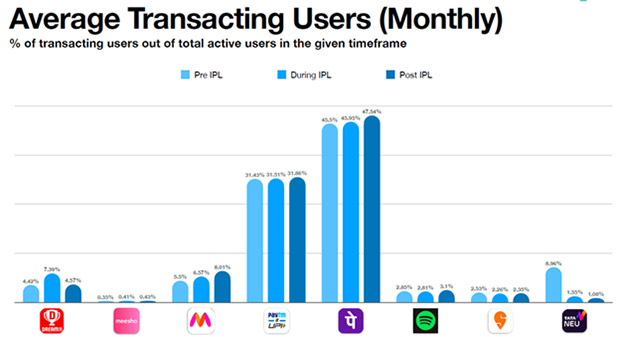 The Average Transacting Users (ATUs) were the highest for the fintech apps as they are built for conducting transactions. It was substantially high for PhonePe (47.54%) against Paytm (31.86%). The increase was also considerably higher for PhonePe pre to post-IPL (from 45.5% to 47.54%) compared with Paytm (from 31.43% pre-IPL to 31.86% post-IPL). The Bobble AI marketing intelligence report shows that Meesho’s ATUs (0.43%) were less than Myntra's (8.01%). The ATUs of Spotify (3.1%) also remain low; the people are using their free services and are still not going for subscriptions. 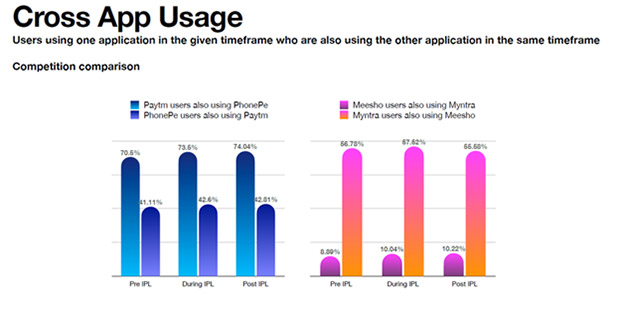 In the case of fintech apps, a very high proportion of Paytm users are using PhonePe (73.5%), whereas, PhonePe users also use Paytm (42.6%) is low. For shopping apps, a large proportion of Myntra users are using Meesho (57.52%). However, one-tenth of the Meesho users have Myntra (10.04%).

The Bobble AI marketing intelligence data reported that the brands reaped benefits out of the IPL advertising. But some brands outperformed the other brands. The report shows that Dream11 has performed well during the IPL but couldn’t sustain its performance post IPL. The other brands saw sustained growth. The real winners were the fintech apps that saw substantial growth during the IPL and sustained the growth even after IPL got over. 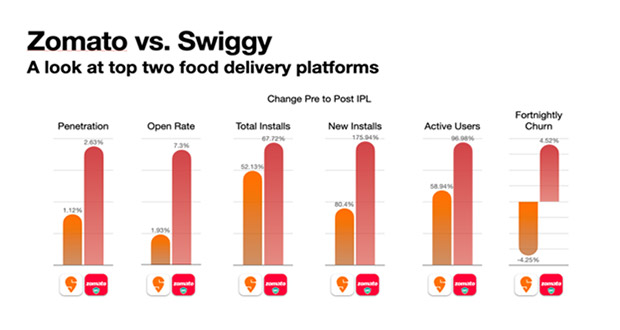 Bobble AI marketing intelligence also analysed whether advertising during IPL gave an edge to Swiggy over Zomato (not an advertiser) or not. The data shows that Swiggy didn’t get any such edge. Zomato performed better than Swiggy in all the metrics apart from the churn rate. The open rate for Zomato (7.3%) was more than Swiggy (1.93%), and so was the case with active users (Zomato-96.98%, Swiggy-58.94%). Advertising during IPL didn’t give Swiggy a push to perform well against Zomato, its main competitor.

The fintech app Paytm has recently announced a collaboration with e-commerce firm Flipkart for its annual festive season sale 'The Big Billion Days' as a payments partner which owns a majority stake in Paytm's competitor PhonePe.