With this, the brand is introducing the two new Cadbury Dairy Milk flavours - Crispy Rabdi and Crunchy Cola 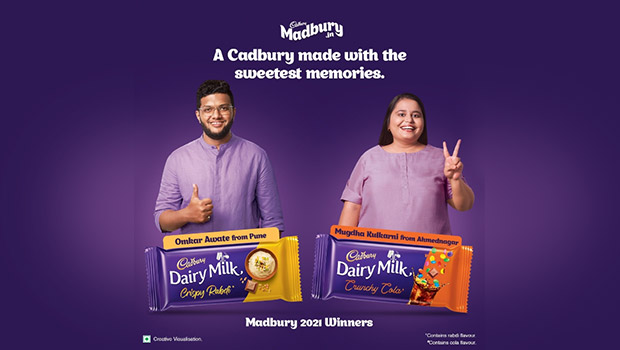 Mondelez India is back with two new limited-edition flavours created by the consumers under the Madbury campaign.

After winning consumer hearts throughout the country during the last two editions, in 2021 the brand was on the look-out for the most unique combinations with Cadbury Dairy Milk that represent ‘Meethin Yaadon Se Bani Yeh Cadbury’. The two winning flavours, Crispy Rabdi and Crunchy Cola, were selected after rigorous consumer testing.

The campaign secured over 3.2 million entries from consumers from 5000 locations across the country. The participants were allowed to choose from 100 ingredients across 8 categories. And Crispy Rabdi, Biscuit Tea, Crunchy Cola, Tiramisu and Banoffee were just some of the delectable combinations tested before announcing the winning flavours.

Crispy Rabdi; a blend of authentic rabdi flavour with crispy butterscotch nuts, and Crunchy Cola; fizzy cola flavour with crunchy Cadbury Gems, created by Omkar Madhav Awate from Pune and Mughda Satish Kulkarni from Ahmednagar respectively, made the cut from millions of entries.

Omkar created Crispy Rabdi because of his family’s love for “meetha”, especially for Cadbury Dairy Milk.  He was inspired to blend it with rabdi and butterscotch nuts at the back of a tasteful memory from his childhood of thoroughly enjoying and loving the rabdi made by his mother, which was better than the ones sold at any sweet shop. The secret ingredient was the butterscotch nuts added by his mother for the perfect crunch.

Mughda on the other hand moulded the sweet relationship between her and her brother in the form of Crunchy Cola flavour. Cadbury Gems was Mugdha’s favourite, cola was her brother’s, and they would time and again exchange these products. Thus, leading to the amalgamation of two favourite childhood products with a nostalgic moment. Thus, truly signifying that the new flavours are nothing but ‘Meethin Yaadon Se Bani Cadbury’.

Anil Viswanathan, Vice-President - Marketing, Mondelez India, said, “At Mondelez India, we believe there is an innovator hidden inside every Indian, and with each edition of the Madbury campaign, we aim to shine a spotlight on such unique creations and the nation’s increasing appetite for experimentation. As a brand that is constantly on the look-out for new ways to engage with our consumers, ‘Meethin Yaadon Se Bani Yeh Cadbury’ has proven to be the perfect gateway of innovation powered by nostalgic memories, and a way to truly be a part of the Cadbury Dairy Milk family. A campaign ‘of the people, by the people and for the people’, Madbury will continue to provide consumers the opportunity to create a Cadbury chocolate that will satiate the diverse snacking palate of the nation. We are thrilled with the love the campaign has received since its inception and we look forward to building a deeper bond with our consumers.”

The limited edition and off-beat Madbury flavours - Crunchy Cola and Crispy Rabdi are available across traditional stores as well as e-commerce platforms at the price of Rs.45 for 36gms pack.

The launch of the winning flavours will be amplified through digital films, outdoor and print.

Additionally, the upcoming fourth edition of the Madbury campaign is set to launch and is expected to be even more exciting and surprising as its precursors.