BestMediaInfo.com sat down with industry experts to gain an understanding of why Outdoor is seen as a 'reminder' medium in the country when elsewhere brands look upon it as a 'standalone' medium

When it comes to Out-Of-Home (OOH) advertising, the international markets have had a very creative approach in their ads, ranging from ambient advertisements to ambush marketing campaigns. But till today, Indian marketers only look at outdoor ads as a ‘reminder medium’ and not as a ‘standalone’ one.

Renowned food chains like McDonald’s and Burger King, to luxury automobile brands like Audi and BMW, among many other top global brands, have used OOH as a creative medium for reminding the people of what they stand for and have created a top-of-the-mind recall value for their products in several foreign countries.

According to Ad guru and brand consultant Agnello Dias, “In many countries outdoor is treated as a powerful standalone opportunity and often there are specific outdoor briefs worked upon individually; compared to India where it is often seen as an add-on or appendage to the main TVC or Print.”

“If some creative folks are proactively motivated to try something on their own for the purpose of pushing the envelope, then that may be a one-off incident or a lone wolf trying to make a difference. But largely, one rarely sees OOH being approached as the main medium at the briefing stage,” he highlighted.

As per Durba Mandal, Head-OOH Business, Cheil India, “I believe brands, in India, have not utilised the OOH to its full potential as far as its innovative use is concerned. The reason could be anything, ranging from the mindset to logistics.”

She went on to add, “I don’t see it as a problem because there are brands that have gone ahead and experimented with the media to create a buzz in the OOH space.”

Mandal also pointed out that as far as the Indian market and available options are concerned, it is just a matter of mindset now, otherwise there are a plethora of experiments one can do to make the media more interactive, engaging and data-driven.

According to Ajay Kakar, CMO, Aditya Birla Capital, "I feel that many consider OOH as only advertising on outdoor and hoardings. To that extent, I believe that advertisers and marketers haven’t tapped the true potential of OOH, ie. Out of Home, which simply means any and all opportunities to catch your audience out of their home, including hoardings."

He also went on to add that hoardings, per se, is a medium that is typically seen as a reminder medium, to support a message conveyed through mass or traditional media, like TV, print or digital. “Most of the messages on the hoardings are directly picked up from the main campaign,” he said.

Furthermore, he emphasised that one does not have to necessarily take a direct adoption of the mass media campaign on to outdoor ads, but should ideally take the essence of the message and then explore interesting renditions thereof.

“After all, one has to remember that a consumer just has a few nanoseconds to notice, read and remember your creative, while they breeze past a hoarding,” he asserted.

On a similar note, Mayank Shah, Senior Category Head, Parle Products, said, “Outdoor does not enjoy the kind of priority that other mass media gets and one of the major reasons behind it is that the regular creative gets lost in the market clutter.”

He also went on to add that when it comes to outdoor ads, nobody really focuses on the creative and mostly they resort to a rather typical adaptation for their outdoor creative from the TV, print or digital ads. “It is not the best way of handling outdoor ads,” he said.

Furthermore, he also emphasised that if one wants to use outdoor ads in the right way, then one should tweak it or make the creatives in a way that is more medium-specific rather than limiting it to adaptations. 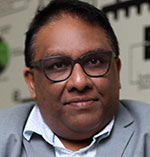 According to Bobby Pawar, Chairman and CCO, Havas Group, “The problem is how you see the medium and that’s where the approach goes wrong because everyone sees outdoor as a reminder medium. In India, outdoors is mostly used by players dealing in real estate, retail, content streaming, movies, etc. and there is not much creativity there.”

He also went on to add that most of the outdoor advertising is mundane in most parts of the world, but the percentage of good work in countries abroad is much larger than that in India, it doesn’t compare at any front because in India outdoor is not looked at as an impact medium.

Moreover, commenting on the gap in creativity between India and the rest of the world in terms of OOH ads, Pawar said, “If privacy laws allow and digital billboards gain prominence in India, they will become more like GIFs and will totally change the game of outdoor advertising in India,” he said.

Citing an example of a digital billboard near a traffic signal, Pawar also pointed out that the digital billboards will open up the scope for creativity as one could easily play different creatives when the light is red, yellow or green on the same.

Adding to this, Aditya Group’s Kakar also stated, “Personally I don’t see any inspirational or creative use of hoardings even in the prime international markets. However, they do use technology in a much better and consistent way than it is used, here.”

“Looking beyond just hoardings, I believe that we need to look at the out of home as a concerted opportunity and strategy through which the consumers can see, touch, test, or experience a particular brand. At the end of the day, what matters is the message and the medium and if the consumers can attribute the experiential campaign to a particular brand, there is a better chance of a prospect or consumer engage with a brand or make a purchase,” he said.

Citing an example of how Aditya Birla Capital explored ambient advertising in the country, Kakar stated, “I recollect a campaign that we did for our life insurance business. Typically, there is a yellow line on railway platforms, indicating that commuters should stay on the right side of the yellow line, to avoid danger or an accident. On these platforms, on the other side of the yellow line, we just wrote ‘Life Insurance?’ and it had a high impact and was our way of reminding commuters of the danger of being on the wrong side of the line.”

Furthermore, Cheil’s Mandal said, “Fast-paced emergence of Digital OOH has been an added advantage for the growth of OOH industry. We see more formats and touch points are being covered with each passing day. But there are precise tech layers which are integrated for targeting the TG for Digital OOH planning in recent times. The availability of consumer data insights has given it further boost.”

However, Dias pointed out that OOH advertising will never match the scale of emphasis given by clients, agencies and creatives to traditional mass media as it is limited to a few eyeballs as compared to mass attention received on Print, TV or Digital mediums.

“It starts from clients and going by sheer quantum, the number of consumers that TV or Print or Digital mediums can get in a day, cannot be achieved by OOH over several weeks and that's where the challenge begins,” he said.

Commenting on another challenge that is faced by OOH Advertising in India, Mandal said, “The current challenge for OOH media is the restrictions by local authorities over Digital OOH on the road side. Easy approvals can really accelerate the Digital OOH growth.

Additionally, highlighting the challenges faced by brands with a decent presence in the country, Shah said, “Unless the brand is not specifically targeting any particular geography, then outdoor ads seem to be very expensive for a comparatively lesser reach in terms of audience.”

He also pointed out that it is in the backdrop of the challenges faced that brands don’t look at outdoors as a primary medium and in turn don’t expect, ask or insist their respective creative agencies to give them outdoor specific solutions.

Concludingly, Shah also asserted that the one of right ways for carrying out OOH advertising would be to think outdoors and then get creative and furthermore amplify it on other mediums like TV, Print and Digital. “In fact, if one gets that creative and thinks out-of-the-box, the buzz will automatically generate,” he said.