Adding to the existing line-up, the channel has planned to premiere four new shows which will go live starting from August 13 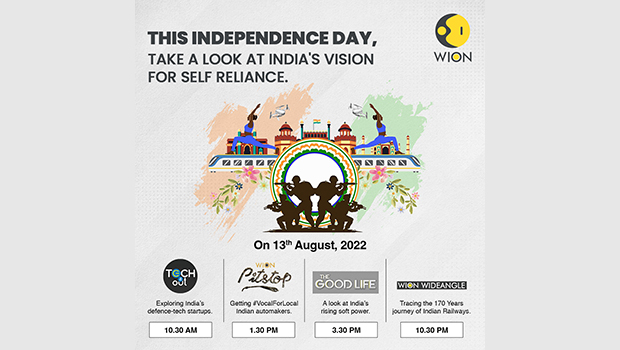 Adding to the existing line-up, the channel has planned to premiere four new shows which will go live starting from August 13, 2022.

The line-up of shows begins with ‘Tech it out’, slated to be launched on August 13, which will explore India’s most promising defence tech start-ups making India self-reliant in the security sector. The show will profile founders, feature their innovative solutions, and explain how their technologies are aiding the country's defence efforts.

Another show, ‘Wion Pitshop’ will cover the latest development in auto industry. The Good Life program will highlight India’s soft power such as vibrant cinema, famous delicacies, yoga crossing boundaries. The last program, ‘Wion Wideangle’, will explore the journey of Indian Railways and is especially recommended for train buffs and those interested in travel to India. It gives a good feel of what it must be like to be there.

Speaking of launching Independence Day special shows, Palki Sharma, Managing Editor, Wion News, said, “India@75 is an occasion to celebrate India’s achievements and its journey. Wion’s special shows aim to chronicle the story of India and the vision that powers it. Self-reliance cannot be achieved without self-awareness. Our Independence Day line-up is a fresh look at the making of India, its strengths, weaknesses and opportunities.”

Anindya Khare, Marketing Head, Zee Media, said, “Wion News has carved a niche among Indian news channels for delivering path breaking news and stories from across the globe. We have brought four new special shows about India’s growth in major sectors such as technologies that are aiding India’s giant leap in the defence sector, innovation in Indian automobile and Indian railways which is considered as lifeline of the nation. We want to bring out India’s growing soft power, through our lens, on this Independence Day.”

The show is being promoted on television, digital as well as social media.