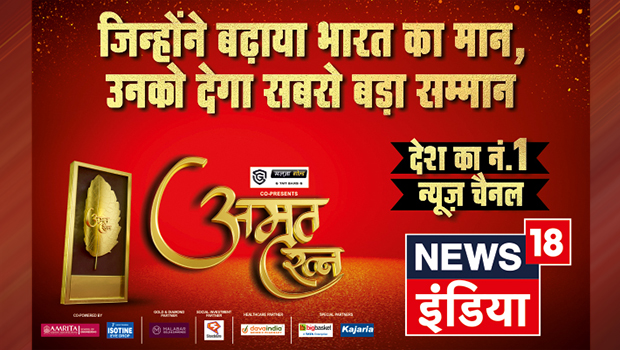 As India celebrates the 75th year of independence this year, News18 India is all set to honour individuals who have made exemplary contributions to India with the Amrit Ratna Samman.

The prestigious honour will be presented at a grand ceremony scheduled to be held on August 2, at the Taj Palace, New Delhi.

News18 aims to establish the Amrit Ratna Samman as an annual celebration of the achievements of Indian icons across different fields who made the country proud, and an occasion to express the nation’s gratitude towards these stalwarts.

These individuals were selected through a rigorous process which included not only the channel’s editorial board but also an illustrious jury of such eminent personalities as Ranjan Gogoi (Retd. Chief Justice of India), Gen (Retd.) VP Malik (former Chief of Army Staff), the legendary Dr Sonal Mansingh, the first Indian to win an individual Olympics Gold, Abhinav Bindra and Prakash Singh (former DG, BSF & DGP, UP and Assam).

The Amrit Ratna Samman aims to not only be amongst the most coveted honours to be conferred in the country but to become the nation’s biggest platform to reflect upon how India and Indians can continue to make giant strides across different fields.

The ceremony hence will see top leaders attend the event and discuss the vision for a bright and prosperous future in India.

Commenting on the Amrit Ratna Samman, Karan Abhishek Singh, CEO- Hindi News Cluster of News18 Network said, “As India’s no. 1 Hindi news channel, we take great pride in contributing to the building of the India story. As the nation celebrates 75 years of Independence, it is our privilege to honour those men and women amongst us who are the true flag bearers of India’s emergence as a leader on the world stage. Amrit Ratna Samman is a humble attempt at our end to honour these giants and express the nation’s gratitude towards their contributions.”

Adding to this, Kishore Ajwani, Managing Editor, News18 India also said, “The idea behind Amrit Ratna was to partake in the momentous celebrations for 75 years of India’s independence. Hence, we have launched an equally momentous initiative to bring forth for our viewers' key milestones in our country’s recent past through those personalities who have played a huge role in shaping the India of today. As the country’s most preferred news channel, we strongly believe that bringing such inspirational content to our viewers will allow us to create a huge positive impact and enable us to contribute to nation building.”