How gender portrayal in advertising evolved over the years

The International Advertising Association (IAA), India chapter, hosted a summit on gender sensitisation in media. Panellists shared their insights about how advertising plays an important role in changing the gender narrative

How are women portrayed in advertising, and how advertising is helping bring about a change in the narrative in today’s times, along with other topics, were discussed in the Research Insights session held during the IAA, India chapter, summit on gender sensitisation on July 29, 2022.

Desai shared the ‘Follow Her Lead’ report, prepared in association with ASCI, which spoke about the changing role of a woman, the transition from a daughter, to a wife, to a mother and how it is perceived by the brands and shown in the ads. He said that in this transition, women, in general, tend to lose their sense of self-identity but that is changing due to various drivers.

Desai shared how women are transitioning and finding their voice.

He also said that the idea that goes into advertising is - ‘Don't Tell Me, Tell Them!’

While sharing insights from Kantar, Basu said that they have studied more than 2.5 lakh ads across the world and more than 25,000 Indian ads.

Basu said that ads are trying to eradicate the biases and stereotypes that existed earlier, through a progressive storytelling approach. Basu shared that 3 out of the 8 winners of the Kantar Creative Effectiveness Awards, India Chapter had only 3 ads with progressive gender portrayal.

The three ads were:

In all these ads, Basu gave reference to Desai’s observation of ‘Don’t Tell Me, Tell Them!’, and said that the impact on the people through these ads is something that is compelling. These types of ads increase brand equity amongst the consumers as well as result in an increase in short-term sales.

Sharada shared her insights on studying ads over the past decades, scoring them on the basis of gender sensitivities as well as analysing transformational ads. Sharada said, “The needle is moving, but it is moving very slowly.”

She took the example of the Layershot ad as well as the Cred ad with Ravi Shastri as gender-offensive ads. Ads like Biba ads, Tanishq ads are progressive, as per the examples given by her while talking about transformation in the ads.

Sharada concluded that health and wellness or the FMCG sector did exceptionally well and the pandemic fueled it. However, the banking and finance sector is still lacking in this respect. 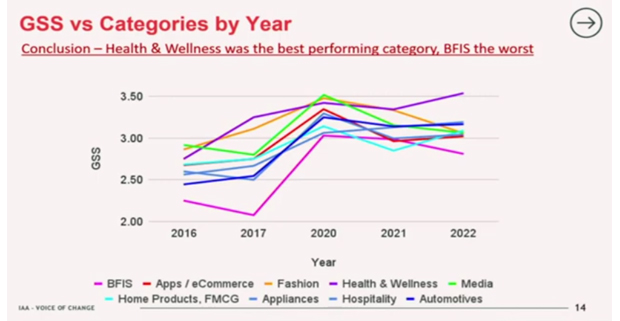 She also mentioned LGBTQ+ and how it was unimaginable just five years ago that ads can be targeted towards them, and portray them in an aspiring manner. She also mentioned how brands make people conscious by using various qualities and their identities. 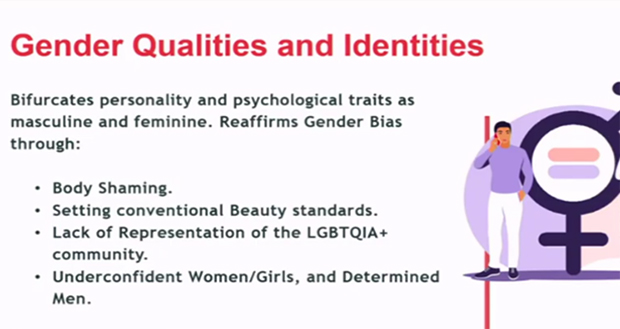 Sharada said that brands making ads having a central storyline on women around days like Women’s day, Mother’s day, etc don’t bother her much. She said, “The fact that brands make such ads and they are seen by such a huge audience, thereby creating an impact is what matters. It makes people think.”

She also shared the instances of negative gender portrayal and how the situation is slowly changing for the better: 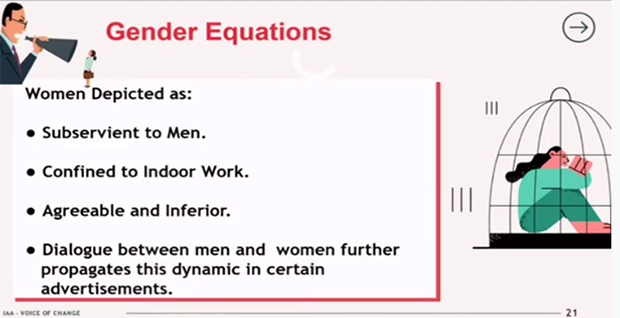 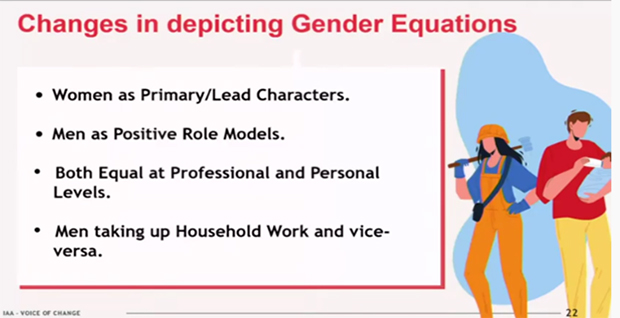 She concluded her presentation by saying, “When we start seeing equal, is when we show equal.”