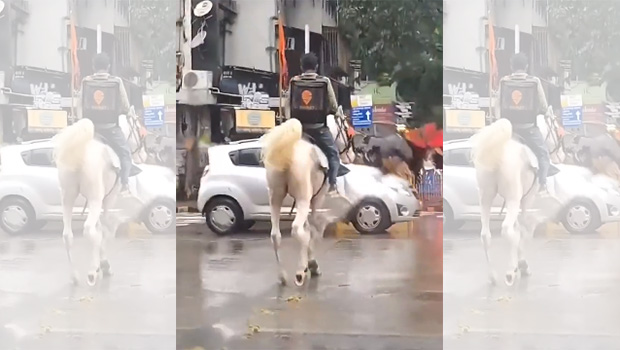 Just a few days back netizens had been amused by the sight of a supposed Swiggy delivery partner coming out on the roads on horseback amid heavy Mumbai rains, and now it looks like the food-delivery platform is curious too.

A couple of days ago, a video of the supposed delivery partner riding his white horse had gone viral.

Just when there were speculations arising that it may have been a part of the brand’s campaigns, Swiggy announced a bounty hunt to look after the man who according to them has become their supposed brand ambassador.

Let's address the horse in the room 🐴 pic.twitter.com/fZ2ci49GJ0

Swiggy, however, came out in the open to accept that this was not part of any plan or campaign by them. It even accepted that they were as baffled by it as the general public, but they would definitely like to get to the bottom of this.

“While we’d like to take some credit for the man’s ingenious plan and vehicle of choice, we really can’t. That’s just because, just like most of you, we too have not yet been able to find out,” Swiggy’s post read.

“It’s 5K in Swiggy Money for the first person who can give us some useful intel about our accidental brand ambassadors, so we can thank them,” it added.

Swiggy has also replaced bikes with horses on the delivery tracking section as a tribute to the man and urged people to participate in the bounty hunt. "Because the nation wants to know more about the Swiggyman on the horse. And so do we!" said Swiggy.

Meanwhile, Swiggy’s bounty post has also gained traction on social media and had some hilarious replies from Twitter users.

Next delivery should be in Majnu bhai style pic.twitter.com/RjzYSmhEm4