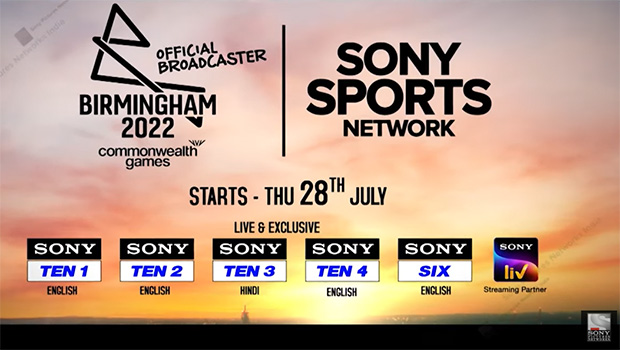 Sony Sports Network is gearing up for the Live broadcast of the XXII Commonwealth Games, starting July 28, 2022 at 11 pm.

The marquee event will mark the return of Sony Sports Network's Live wraparound studio show Sports Extraaa featuring panelists and guests. The global event which will see participation from over 200 Indian athletes, will be telecast Live across Sony Six, Sony Ten 1, Sony Ten 2, Sony Ten 3 and Sony Ten 4 channels, as well as live-streamed on its on-demand OTT platform SonyLIV.

The film features Prime Minister Narendra Modi and Anurag Singh Thakur, Union Minister of Youth Affair and Sports, and Minister of Information and Broadcasting, along with several Indian athletes with a rallying call to win medals at the games and celebrate our 75th Year of Independence in England.

Sony Sports Network will live telecast the Birmingham 2022 Commonwealth Games with two-language feeds across its channels. In addition to this, they will also have their Live studio show, Sports Extraaa, return for the games.

Legendary Indian athletes like Viren Rasquinha, Somdev Devvarman, Trupti Murgunde, and Veda Krishnamurthy along with sports journalists Ayaz Memon and Siddharth Pandey will be part of the star-studded panel for the show and will be seen sharing their insights around the happenings throughout the games. Sports Extraaa will also host eminent guests from the sports fraternity like Vijender Singh, Anju Bobby George, Satish Shivalingam, Kripashankar Bishnoi and more who will weigh in and analyse the performances of athletes from across the participating Commonwealth nations. The show will be hosted by Sony Sports Network’s Arpit Sharma and Sagarika Chhetri.

As part of the build-up, the Network also launched an eight-episode show titled ‘The Torchbearers'. The first episode of the show featured the Union Minister of Youth Affair and Sports, and Minister of Information and Broadcasting, Anurag Singh Thakur along with Olympians Lovlina Borgohain, Nikhat Zareen, Hima Das, Lakshya Sen, Dutee Chand, Noah Nirmal Tom, Srabani Nanda, and Lakshya Sen, among others.

And three episodes of the show will be telecast again on July 28 leading up to the Opening Ceremony which will witness the Indian contingent of over 200 athletes. The grand ceremony will have a live audience of more than 30,000 at the Alexander Stadium in Birmingham.

The quadrennial event will mark the debut of the Indian Women’s cricket team led by Harmanpreet Kaur for the Women’s Cricket T20 event. Banking on the likes of Smriti Mandhana, Shafali Verma, and Jemimah Rodrigues, team India will play against Pakistan, Australia, and Barbados to qualify for the play-offs.

After impressing viewers with their brilliant performances across various events, new athletes like DP Manu, Annu Rani, and Manpreet Kaur, among others will also look to increase the medal count of India.

Rajesh Kaul, Chief Revenue Officer, Distribution and Head – Sports Business, Sony Pictures Networks India, said, “After the huge success of the Olympic Games Tokyo 2020, it gives us immense pleasure to broadcast the Birmingham 2022 Commonwealth Games. The broadcast rights for the Birmingham 2022 positions Sony Sports Network as the home for international multi-sporting events in India. Armed with a single goal to put our country on the global sporting map, our athletes have been training incessantly and it is our endeavour to showcase the stories of these national heroes. Keeping this goal in mind and to rally our support for the Indian contingent, we have also launched the ‘Birmingham mein Jitega! Hindustan Hamara' campaign. In addition to this, to provide a holistic viewing experience, our studio show, Sports Extraaa will feature stellar panelists who will provide real-time insights into various games.”

Viren Rasquinha, Former India Hockey Captain and CEO, Olympic Gold Quest, said, “The 2020 Summer Games was a turning point for Indian sports as our contingent was able to move the needle and get our best medal haul ever. While all the seven medals are precious to us, but the bronze medal won by the Indian Men’s Hockey team is closest to my heart. Having been an integral part of the sport, it has always been my dream to win as many medals as possible for the country. And that has been the aim of every athlete who represents their nation on a global platform. I will be rooting from the Sony Sports Network studio for the Indian contingent at the Birmingham 2022 Commonwealth Games, and I am hoping our athletes will be winning many medals for the country.”

Somdev Devvarman, Olympian and Commonwealth Games Gold Medalist, Former No 1 India Tennis Player, said, “India has shown consistent performance in racquet sports over the years, and we hope to see this momentum grow. The recent achievements of PV Sindhu and Manika Batra are the perfect example of this. With a strong Indian contingent taking charge and representing the nation across all disciplines at Birmingham 2022 Commonwealth Games, I am hopeful that India will surpass the 66-medal tally registered during the 2018 Commonwealth Games. I am also excited to join my fellow experts at Sony Sports Network’s Sports Extraaa show to closely analyse the performances throughout the event.”

The Live coverage of Birmingham 2022 Commonwealth Games is starting from July 28, followed by the Opening ceremony on July 29 at 12:30 am across Sony Six, Sony Ten 1, Sony Ten 2, Sony Ten 3 (Hindi) and Sony Ten 4 channels (English) channels.