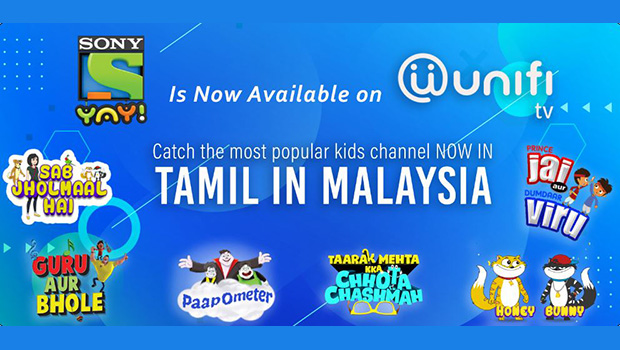 With a line-up of fan-favourite shows, the channel entered the Malaysian market on July 1, to expand its presence further across the South Asian region.

The channel expects to tap into the prominent Tamil-speaking population of the region which comprises a total of 1.8 million people - the third highest in the world, after India and Sri Lanka. Considering the significant size of the Tamil-speaking audience in this region, the launch is an opportunity for the channel to extend its content offerings to an expanded audience base across the South Asian market.

With its offerings, Sony YAY! will cater to the Tamil speaking audience of Malaysia along with the Indian diaspora of the region which accounts for close to 6.8% of its population.

Sony YAY! will be accessible to the subscribers of unifi TV under the Varnam Plus Pack and the Ultimate Pack.

Leena Lele Dutta, EVP and Business Head, Sony YAY!, said, “Over the span of five years since we launched Sony YAY! the channel has rapidly risen to become the #1 kid’s entertainment channel in India. The current Indian channel portfolio in Malaysia has a huge potential and with the launch of Sony YAY! in Malaysia, we will be leveraging this opportunity and extending our diverse range of enthralling kid’s entertainment options to an extremely new and vibrant set of audiences. The launch has made us optimistic about newer opportunities that we can explore to reach young audiences across geographies.”

Neeraj Arora, EVP and Head - International Business, Sony Pictures Networks India, said, “As one of the fastest-growing kid’s entertainment channels in the Indian subcontinent, Sony YAY! has consistently made efforts to become the ultimate entertainment solution in the kid’s genre. The channel has curated and brought a bouquet of international shows and IPs to Indian audiences. This partnership with Telekom Malaysia Berhad will help us cater to the appetite of the rapidly growing audience across the Malaysian market and solidify our position in the global kid’s entertainment segment by bringing popular Indian shows to global audiences.”