The Japanese company recently launched its ‘MAGNIFIQ’ series television sets in India, and it plans to invest heavily in the next two years for expansion in the country 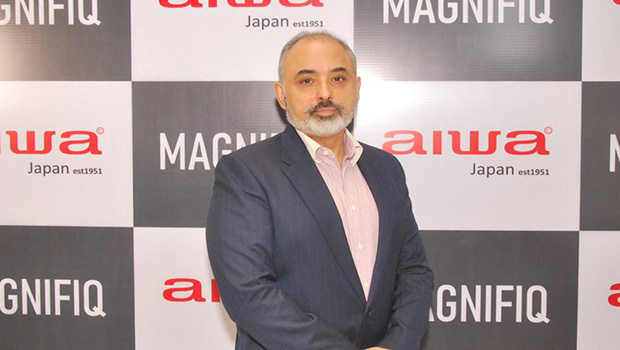 Japanese consumer durables firm Aiwa is eyeing a mega re-entry in the Indian market, and it plans to diversify its product portfolio to include air conditioners, washing machines, and refrigerators. The company is targeting a revenue of $1 billion from the country in the next 4-5 years, said Ajay Mehta, Managing Director at Aiwa India.

The company on Wednesday launched its ‘MAGNIFIQ’ series television sets in India, and it plans to invest heavily in the next two years for expansion in India.

As the car market began to take-off in the early 2000s, Aiwa was one of the most well-known brands for car audio systems. It was a reasonably well-known brand in India in the TV segment too, even as Sony and Panasonic made significant inroads. However, it dropped off the radar around 2010.

Now, the consumer electronics company is attempting to resurrect its legacy appeal for audiophiles in India. Speaking to BestMediaInfo.com at the launch event, Mehta noted that now the journey has started again and is looking good so far, they have already introduced a range of audio products for which they have received phenomenal response and they hope this will extend to their TV offerings too.

Mehta shared some of their marketing strategies that they will be deploying to promote the new launch. He said, the cornerstone of the marketing strategy is that the brand will not be a discount brand, or the cheapest brand in the market, but will be reasonably priced, with its key focus being customer experience and hence, to begin with it will not be sold online and will be made available in as many stores as possible.

As far as the marketing strategies on digital platforms are concerned, Mehta said, “The new medium now is social media, so we are strongly focusing on that. Moreover, we will be more aggressively chasing the influencers as part of our marketing strategy.”

“India is a huge market. And we are not in the business of fighting the very low-end brands,” added Mehta upon being asked about the strategy to survive in the very competitive market.

However, Mehta remarked, to achieve the target of $1 billion, the company will need to diversify its products portfolio and is currently looking at consumer durable categories such as ACs, refrigerators, washing machines and small appliances.

Concluding on effect of the pandemic on the business, he said, “The Covid-19 pandemic has definitely affected the business, the whole project was delayed by almost two years but if we start counting from now, we hope to meet our target in the next 4-5 years to touch $1 billion top line.”