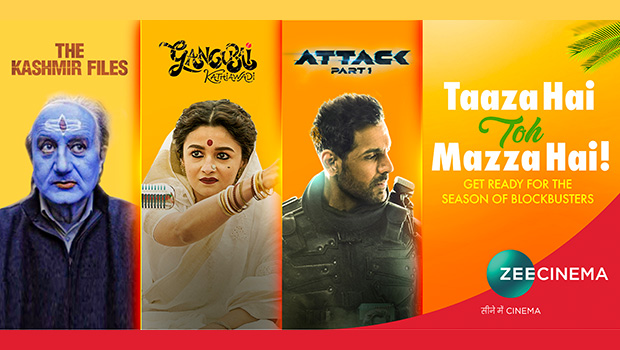 The audience wants fresh, new, and entertaining films, and

The audience wants fresh, new, and entertaining films, and Zee Cinema is responding to the audience’s demand with a fully-Taaza movie line-up of the recent superhits, it is bringing television movie premieres of various superhits.

Audience will be able to catch the best of entertainment and big hits that broke the box-office with performances from the likes of actors Akshay Kumar, Alia Bhatt, John Abraham, Ramcharan, NTR Jr, Tiger Shroff, Kangana Ranaut, and many others.

Audience will be able to experience the game-changer film that touched an emotional chord of an entire nation and received tremendous response from the audience with the brilliant ‘The Kashmir Files’. Later, it will also present the high-octane raw action film – ‘Attack’, starring John Abraham and Rakul Preet Singh.