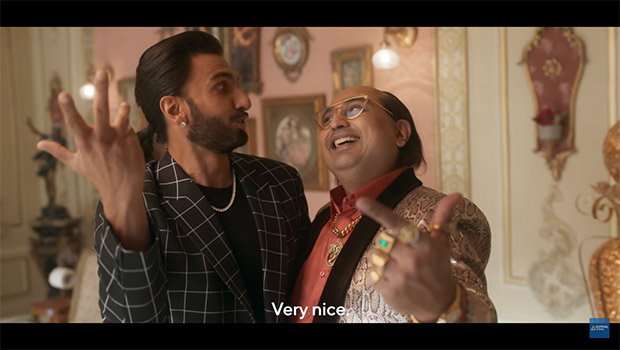 Singh will be seen playing a Sindhi character in the film and the film is entirely shot in the Sindhi language to create disruption and memorability.

The 'Dadho Sutho' campaign is based on the fact that most people spend lavishly on interiors, like lights and other furnishings while making their dream home. But when it comes to pipes, people often end up choosing inferior pipes because of low awareness and lack of knowledge about good piping. Also, the pipes are concealed behind the wall with a no ‘show off’ value, so ignoring the importance of pipes jeopardises the entire house.

Astral had roped in Singh as their brand ambassador in 2021 with a high decibel multimedia campaign which was well appreciated, this time it again seeks to recreate that magic.

Kairav Engineer, Astral Limited, said, ''As a responsible brand, we think we have to educate our consumers about investing in superior quality and long-lasting pipes in their dream homes. The campaign starring Ranveer Singh in a never seen before Sindhi character helps deliver the message of investing in a robust foundation and piping infrastructure for domestic use in an engaging manner, further reinforcing Astral as India’s trusted pipes.''

Heval Patel, Head of Account Management, The Womb, said, "In a commoditised, low-involvement category, we were clear that we had to create a preference for Astral Pipes. In our numerous conversations with homeowners and influencers (plumbers/contractors), we understood that while people meticulously plan every aspect of their home interior decors, tiles, furniture, etc., to match lifestyle and status, they inadvertently end up using compromised pipes. As a leading and trusted pipe brand in India, we had to highlight the ill-effects of doing so and eventually make Astral synonymous with quality pipes, hence the phrase 'Astral Dadho Sutho'.

The challenge was to create a communication that not only stands out but creates conversation amongst the viewers in the low involvement category.

“We decided to have the flashy house owner, who has left no stone unturned to make a statement while building his house but chooses ordinary pipes. The playful chemistry between Ranveer and the house owner's uncle brings flavour to the film and shall connect with our audience. Also, the phrase 'Dadho Sutho' has the potential to become part of our daily conversations,” said Akshat Trivedi, Creative Head, The Womb.

The campaign will be amplified on various mass media platforms reaching out to millions of households across the country.