Johar and Shetty are seen amping-up the drama in the campaign films, as each bite delights and surprises them 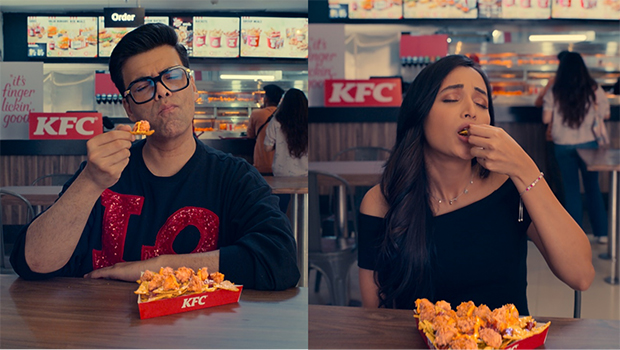 Johar and Shetty are seen amping-up the drama in the campaign films, as each bite of the new offering delights and surprises them. As the Colonel unveils KFC’s Popcorn Nachos, both of them say – “Yeh snack nahi drama hai!”

Moksh Chopra, Chief Marketing Officer, KFC India, said, “A bit of crispy and crunch go a long way in inducing some excitement in daily routines. And who better than celebrated artists Karan Johar and Srinidhi Shetty, to reinforce the drama in KFC’s Popcorn Nachos, in their signature charismatic styles. With double the crunch and an interesting blend of flavours, drama-lovers Let’s KFC!”

Johar said, “I never thought that something could top the emotions and drama of my films. But just a bite of the flavourful KFC Popcorn Nachos, I realised yeh snack nahi, drama hai! The all-new offering by KFC is packed with twists and crisps, just like I like my scripts and life to be. This collaboration has been nothing less than a scrumptious ride; so, lights, camera, drama!”

Shetty added, “KFC’s signature crispy chicken has been a personal favourite. But with the new KFC Popcorn Nachos, it was truly love at first bite! I was thrilled at the opportunity to partner for the launch of this new offering. With a punch of masala and double the crunch – this one’s bound to be a superhit.”

Ogilvy North, Chief Creative Officer, Ritu Sharda added, "With so many different elements, flavours and textures in each bite, we realised KFC’s Popcorn Nachos wasn’t just any snack. It was an edge-of-the-seat, ‘masaledaar plot’, full of twists and turns. ‘Yaani ye snack nahi, full drama hai!’ And who better to land drama, than the two most dramatic people from across the country – KJo and Srinidhi."