The three-day event was full of energy, people catching up with each other, several masterclasses and sessions, parties and memories to take away home 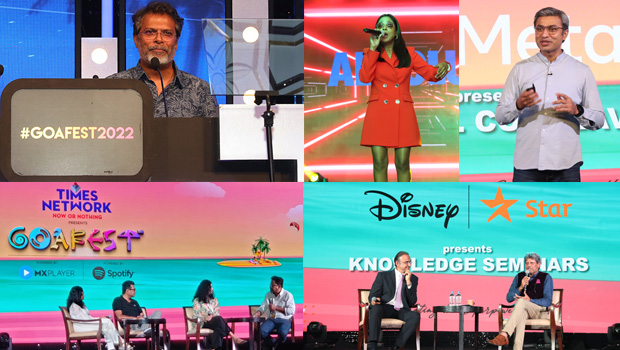 The 15th edition of Goafest, India’s biggest advertising, media and marketing symposium, featuring some of the industry’s brightest minds concluded on Saturday, May 7, 2022. The three-day event saw celebrations, several masterclasses, sessions, parties and lots of networking taking place. This year’s Abby and Goafest recorded the highest number of entries and registrations because it was being held after a hiatus of two years.

Advertising Agencies Association of India (AAAI) unveiled its new logo created by Tempest Advertising’s art director, Lohidasu Rokalla. It was also the first time ever that the Abby Awards collaborated with The One Show.

With an underlying theme of celebrating ‘The SuperPower Within’, delegates at Goafest 2022 were welcomed with a live musical performance by Sukhbir - Prince of Bhangra.

The first session of the day had actor Yami Gautam talking about films, values and the need to imagine and build a life beyond numbers. This was followed by a super talk from Vineeta Singh, Co-founder and CEO, SUGAR Cosmetics and Shark, Shark Tank India, who highlighted the importance of building a brand with quality products and content before focusing on advertising. She also emphasised the power of empowering a team, which mirrors the ethos of SUGAR, passionately stating, “Empower them and let them go rule the world!”

Ankush Sachdeva, Co-Founder and CEO, Sharechat and Moj and Vikram Sakhuja, Group CEO Madison Media & OOH at Madison World engaged in a meaningful conversation highlighting the mission that Sachdeva is on. He spoke about how short-form content is going to be the future of content consumption and while addressing the advertisers, he said, “If you do not catch the attention of the consumer in 2 seconds, you have lost them.” He also emphasised on the advantage of reaching the audience using regional content.

Thereafter, another super-talk was given by Kiran Bedi, Former Lt Governor Puducherry & Ex - IPS Officer, who highlighted the importance of leadership, emphasising, “Leadership is internal - you start with yourself; if you can’t lead yourself, you can’t lead people.”

As the sun went down on Day 1, a total of 15 Publisher Abbys and 87 Media Abbys were awarded. Lodestar UM won the Grand Prix for Mumbai Police for their campaign, ‘The Punishing Signal’.

The first session commenced with Badminton player and Olympic medallist P V Sindhu sharing several aspects of her career, personal journey, tournaments and all that is in store for 2022. In the next session, actors Vikrant Massey, Ali Fazal and Gautam Talwar, Chief Content Officer, MX Player, discussed the facets of how OTT changed the lives of not only the audience but also of the creators.

In another session, Sam Glassenberg, Founder & CEO of Level Ex, shed light on the potential of video games and how brands can reach audiences through this medium. He also spoke of the perils of gamification versus the importance of emphasis on real game design.

The second half of the day began with singer, Shilpa Rao, singing melodies to woo the crowds and raise the temperature at the festival.

In the second half of the day, Menno Kluin - Chief Creative Officer, Dentsu Creative USA, spoke on Collaborative Creativity: Technology, Craft, People, providing the audience with a practical guide to creativity and ways to become a great creative department. He said, "It is important to start with the problem statement, then build the machine with an environment with great leadership and mindset as it determines the outcome, and finally, build up your people and play the confidence game."

As the day passed, Kapil Dev, the Cricket World Cup winning Captain and Charu Sharma, Sports Broadcaster & Entrepreneur spoke about topics like styles of leadership and what it takes to be a leader, the criticality of self-belief and self-love, the need for commitment while working in a team, and much more. Dev also shared some delightful anecdotes of the 1983 World Cup.

Soon after that heartfelt and stimulating conversation, Rahul Shivshankar, Editor-in-Chief & Editorial Director – Times Now, underscored the significance of leadership, while having the courage of conviction. He strongly recommended that a leader must stand for the public interest at all costs.

Later, an enthralling conversation was witnessed by the delegates between two stalwarts of the Indian film industry - SS Rajamouli and Anupam Kher. The dialogue focused on their personal journeys to becoming a part of the film fraternity.

Raj talked about her initiation into cricket and said, “The very reason I got into cricket was my father.” She fondly recollects her father enrolling her into sports to inculcate a sense of discipline. Taking that further, she also mentioned a time before her class 12 board exams, when her parents coaxed her to choose World Cup selections over examinations. Further, discussing the rising profile of women’s cricket in India, Raj said that there have been many improvements over the last decade, from training to accessible amenities. She emphasised the importance of nurturing a sports culture across India.

Following this, Gowthaman Ragothaman, CEO, Aqilliz & Co-Founder, Web3 Marketing Association, talked about digital marketing challenges faced by the companies in the current era and how blockchain can be used in marketing.

Then Sandeep Bhushan, Director and Head of India GMS for Meta, shared insights on the road to the metaverse – interaction and immersion. He spoke about how the internet evolved from a text-based platform to photos, and videos and is now looking at an immersive experience. He added, “Metaverse will feel different. It will have continuity; your presence will be connected across multiple devices.”

Following this was a fireside chat on Diversity, Equity & Inclusion with Rathi Gangappa, CEO, Starcom India, Dheeraj Sinha, CEO & Chief Strategy Officer, South Asia, Leo Burnett, Rohit Ohri, Chairman & CEO FCB India, and Suhela Khan, Country Program Manager, We Empower Asia, UN Women on the panel. The panel passionately spoke about various ways in which Diversity, Equity & Inclusion can be imbibed in organisations across the board. Gangappa stated that organisations should begin enabling women and promoting inclusivity. Sinha, while answering a question on changes that need to be inculcated, said, “We have to change cultural archetypes.” He emphasised on the need to change small things that promote a culture of comfort. Khan, too, stressed the need to make industries gender-responsive and inculcate the values and principles of women’s empowerment stating statistical proof-points wherein inclusivity has positively impacted business growth.

Leo Burnett won the Creative Agency of the Year title. Leo Burnett was one of the agencies that made a comeback to the ace Indian advertising awards this year. Famous Innovations bagged its second Grand Prix in the OOH/Ambient Media category for the campaign “The Applegram” for Radio Zindagi.

Altogether, two Grand Prix, 50 Gold, 130 Silver, 208 Bronze and 137 Merit were awarded across 22 creative categories over three days of Goafest. Sony Pictures was the Broadcaster of the year; Mindshare became the media agency of the year and TOI swept away the Publisher Abby.

Tags: Goafest 2022 Why it was worth the wait
Advertisment
More from this section