The documentary captures the essence of Network18’s ‘Sanjeevani - A Shot Of Life’, a Federal Bank CSR initiative, with NGO partners United Way Mumbai 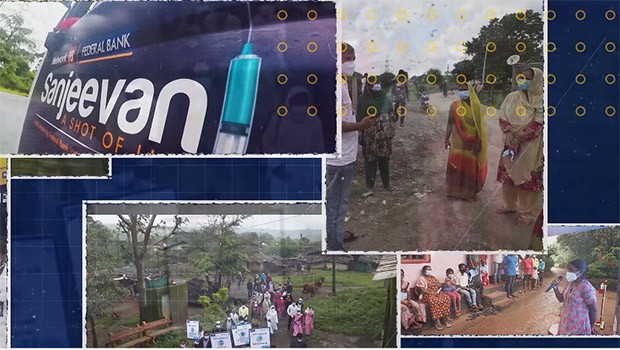 Vice President, M Venkaiah Naidu unveiled the documentary titled ‘Sanjeevani - The Journey’ which captured the essence of Network18’s ‘Sanjeevani - A Shot Of Life’, a Federal Bank CSR initiative, with NGO partners United Way Mumbai, and it's a journey from conceptualisation to execution.

Naidu also delivered a keynote address supporting the initiative at an event that was held at his residence at 7 pm.

On April 7, 2021, Network18 launched this initiative, just as India was fighting a devastating second wave of Covid-19 infections. What followed over the next twelve months was India's largest vaccine awareness drive, and the documentary showcases just that.

M Venkaiah Naidu expressed his happiness to be a part of this programme. He said, “Sanjeevani is an initiative for the larger good of the people of the country, which requires commitment, conviction and passion. This vaccination is the need of the hour, back then and even now. Due to various reasons, people had doubts and hesitated to take the vaccine. In this situation, this initiative by Network18 along with Federal Bank is praiseworthy to reach out to people, educate them and remove the misgivings from their minds. It is the responsibility of the government. At the same time people’s participation and cooperation from well-meaning organisations is very much required to see that this programme gets momentum and becomes a successful one. I convey my deepest appreciation to all the doctors, scientists and frontline health workers for the spirit of sacrifice displayed by them for fighting the pandemic and serving the people. I would also like to appreciate and salute our Indian scientists to come out with Indian made vaccines. It is the collective effort of the government and the citizens that 183 crore Covid-19 vaccines have been administered so far. It’s a remarkable achievement.”

Santosh Menon, Chief Content Officer, Network 18, said, “Through 'Sanjeevani – A shot of life’, we tried to reach the furthest corners of India and do our bit to fight against this deadly Covid-19 virus. And now, through this documentary, we want to celebrate the work done by our frontline warriors, whether it be doctors, paramedics, Anganwadi or Asha workers, who helped vaccinate India's huge population. This documentary throws light on the efforts taken to raise awareness around Covid-19 vaccinations and mobilise efforts to ensure the vaccination of every Indian in India’s remote corners. It encapsulates the journey from its conceptualisation to the execution of driving an on-ground vaccine awareness including busting myths and helping some of the worst Covid-hit districts of India.”

Puneet Singhvi, CEO - Digital and President - Corporate Strategy at Network18 Media & Investments, said, “As one is aware, there was a lot of hesitancy on vaccination and even more in the country’s remote corners. Through ‘Sanjeevani – A shot of life’, in collaboration with Federal Bank and NGO United Way, we crossed this hurdle of vaccine hesitancy and covered over 1000 villages across India, through mass awareness drives, transportation and other registration assistance, among others. The documentary is an extension of this initiative which we are proud and honoured to have the Vice President launch it at his residence. With its digital launch we hope it to reach across the country.”

Anil Parmar, Vice-President, Community Investment, United Way Mumbai, said, “Since many of the people weren’t even aware of the vaccination, registration was all the more challenging. The most arduous task was the accessibility, creating an awareness drive and busting myths around vaccination as these are remote corners of the country. Through our ‘Sanjeevani – A shot of life’, in joint effort with Network18 and Federal Bank, we managed to overcome this challenge by bringing all the stakeholders together by mobilising efforts around awareness. The documentary illustrates these efforts, right from conception to its execution, portraying all the challenges and achievements.”

Shyam Srinivasan, MD and CEO, Federal Bank India, said, “As an organisation, we have always been working towards the welfare of the people. ‘Sanjeevani – A shot of life’ with Network18 and United Way, once again, gave us the platform to come together and help in the cause to make India a safer place with our vaccination awareness drives and other efforts like masking up and social distancing. We managed to access 1000 villages across India, reaching lakhs of Indians and helping them achieve a state of normalcy. With the country’s Vice President launching the Sanjeevani documentary at his residence, it is indeed a proud moment for us.”

‘Sanjeevani – a shot of Life’ initiative, which covered over 1000 villages, starting from Wagah Border in Punjab, reached out to nearly 5 lakh people, helping them back to normalcy. The initiative worked towards busting myths, overcoming vaccination hesitancy and helping some of the worst Covid-hit districts of India, with over 1 lakh beneficiaries registered for the vaccine.

While the documentary captures the essence of the work done towards vaccinating India, it also pays tribute to frontline warriors like doctors, nurses, ANMS, Asha and Anganwadi workers along with social workers and acknowledges Sanjeevani Champions who went beyond the call of duty.

The initiative during its roll out had seen massive support from all walks of life, including India’s top-notch policymakers like Mansukh Mandaviya – Union Health Minister, Anurag Thakur – Minister Information and Broadcasting, Aditya Thackeray – Cabinet Minister of Tourism and Environment for the Government of Maharashtra, and Bollywood celebrities like Sara Ali Khan, Kirti Kulhari, and more.

The initiative also had a dedicated anthem ‘Tika Laga’, composed by music director Shankar Mahadevan and sung by him, Harshdeep Kaur and others, to encourage vaccination.

The documentary is now available for public viewing on Network18’s social media channels.