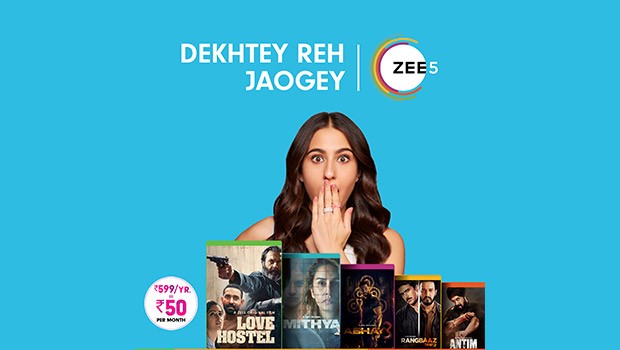 The campaign aims to showcase its vast content library and it revolves around the theme of FOMO, an emerging emotion amongst the viewers.

The campaign film weaves the feeling of missing out on great content and highlights that with Zee5, audiences can watch new films and shows every week, thereby avoiding the FOMO, always.

The SVOD viewers on the platform get access to the diverse range of movies and web series behind the paywall, along with AVOD content before they are aired on TV.

As per the platform, its library currently features 500,000+ hours of content spanning over 3,500 films, 1,750 TV shows, and 700 originals, in 12 Indian languages: English, Hindi, Bengali, Malayalam, Tamil, Telugu, Kannada, Marathi, Oriya, Bhojpuri, Gujarati, and Punjabi, all available for a subscription of Rs 599.

Manish Kalra, Chief Business Officer, Zee5 India, said, “At ZEE5, we have always aspired to democratise entertainment and provide not just quality content to our audiences but provide that at a price that majority of the viewers can enjoy it. While Zee5 has a large content library that spans across various languages, the second leg of the 'Dekhtey Reh Jaogey' campaign will help us exhibit our diverse content offerings, especially regional content and further our aim of deeper regionalisation by making deeper inroads into the country. With the new subscription package, viewers will have access to an endless supply of compelling and binge-worthy entertainment at an annual price of Rs 599. As the multilingual storyteller of India and Bharat alike, we will continue to focus on entertainment inclusion by producing relatable and varied content across languages, keeping in mind the several consumer cohorts we cater to. We will keep finding technologically advanced ways to make Zee5 a user-friendly platform that consumers prefer to entertain themselves, not just in India but globally. We are delighted to have Sara and Amol joining hands with us once again in providing the best of entertainment to India at the best of prices.”

Sagar Kapoor, Chief Creative Officer, Lowe Lintas, said, “Today, content has become the perfect conversation starter and enabler. Conversations are invariably peppered with references to dialogues and characters from content pieces across OTT platforms. It is the “conversation drama” that people miss out on when they miss content. We decided to build on this idea for Zee5 to pull in their audiences, every week to watch new shows and movies, and stay above content FOMO. So, they never miss out on all the excitement on and off the screen.”

For 'Dekhtey Reh Jaogey', Zee5 has planned a high-frequency promotional outreach across TV, social media, and the internet as part of a 360-degree approach.