As per the platform, the tab will bring together the best of cricket and fans will be able to access exclusive video content, real-time match updates through a Scorecard and other interactive widgets 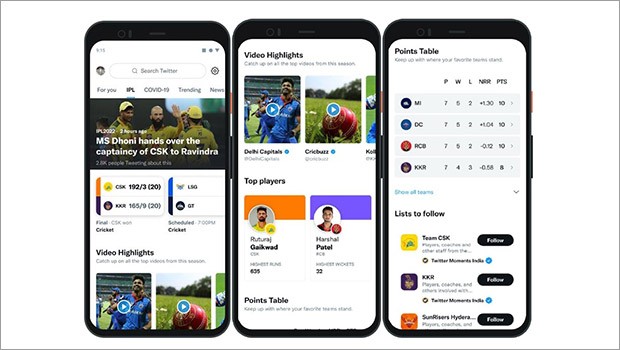 Micro-blogging platform Twitter is building for India in India, it is experimenting with a dedicated cricket tab on its Explore page, which will be available to those who use Twitter on Android smart phones.

As per the platform, the tab will bring together the best of cricket and fans will be able to access exclusive video content, real-time match updates through a Scorecard and other interactive widgets.

Twitter said in a statement that everyday people come to the platform to keep informed about what’s happening and their interests. Among the various passions that people pursue in the service is cricket.

In fact, 75% of people on Twitter in India identify as cricket fans and 58% play the sport. Between January 2021 - January 2022, 4.4 million Indians on Twitter shared 96.2 million Tweets about cricket, it added.

This season, Twitter is giving fans a reason to stay glued to their favourite second screen. Starting this week, the service will be testing a Cricket Tab on its Explore page, rolling out the experiment to some people in India who use Twitter on Android. The tab will be a single landing point that will serve as a channel of discovery for what’s happening in cricket along with relevant, exclusive, and Twitter-first content.

Shirish Andhare, Director of Product for Twitter India, said, “Twitter is a megaphone for millions of people in the country who are already ‘Making India Happen’ on Twitter. We learn from the conversations constantly unfolding on the service and they motivate us to build more for our audiences here. Since cricket’s biggest fan bases extend way beyond their teams’ home stadiums in India, and everyone can’t be at every match, Twitter has been an incredibly important part of how the cricket storyline gets out there to fans not just in India but all over the world. Through our new Cricket experiment offering an immersive experience], we want to make it easier for India’s cricket fans to find relevant and engaging content as well as encourage conversations and find latest updates including the score all in one place. We endeavour to provide a live sports experience that can’t be found anywhere else by way of #OnlyOnTwitter content.”

People who have access to the tab will be able to view content in various formats, including:

Events page: Fans will be able to follow the most recent Tweets and updates from the field on a dedicated page at the top of the cricket tab.

Live scorecards: Following match scores on Twitter will now be easier with a live scorecard that will appear on the cricket tab as well as on the Events page.

Interactive team widgets: The tab will also give fans access to content widgets like top players, and team rankings. As things escalate on-field, these widgets will serve fans with the latest scoop around what their favourites are up to, in real time.

Top video content: To give an immersive experience to the fans, Twitter will be partnering with broadcast and creator partners to bring customised video content including in-match moments, highlights, and off-field action as follows:

Topic Tweets: Twitter Topics use machine learning to deliver subject-related Tweets. The IPL Topic will be available under the cricket tab for fans to follow conversations a lot more closely.

Additionally, fans may receive push notifications around key moments during a match to help them stay looped into every talk-worthy moment from the game so that they miss out on any action from the field.

Fans will also be able to cheer for their teams by Tweeting to activate custom team emojis in English and seven Indic languages including Hindi, Bengali, Gujarati, Kannada, Marathi, Punjabi, Tamil, Telugu.