Political parties increase spending on Facebook ahead of Assembly elections

As per the data received, BJP has spent Rs 1.86 crore to target voters in UP and Punjab on Facebook in the last 30 days, while Congress too has parted with around Rs 1.55 crore in the same time period for ads targeting the two states 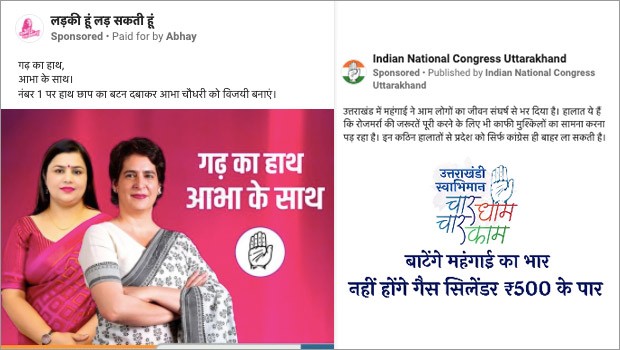 Bhartiya Janata Party (BJP) is the highest spender on Facebook among all the parties contesting elections across the five states, Uttar Pradesh (UP), Punjab, Goa, Manipur and Uttarakhand, according to the Facebook ad library.

As per it, BJP has spent Rs 1.86 crore to target voters in UP and Punjab on Facebook in the last 30 days, from January 7 to February 5.

The second party which is spending big ahead of the upcoming elections in UP and Punjab is the Indian National Congress, with its spending on Facebook pegged around Rs 1.55 crore.

On the other hand, Indian National Congress (INC) has spent around Rs 69 lakh in UP and over Rs 86.44 lakh in Punjab for the upcoming assembly elections.

Aam Aadmi Party (AAP) bought ads worth pegged around Rs 92 thousand in UP in the last one month on Facebook. Despite having a huge stake in UP, Samajwadi Party’s ad spends on Facebook for UP elections hovered around a meagre Rs 4.74 lakh.

In comparison to spends in UP, AAP has made significantly huge ad spends, worth Rs 10.89 lakh and Rs 2.63 lakh, for Goa and Uttarakhand.

Similarly in Manipur, BJP has spent just Rs 4.1 lakh whereas INC has spent around Rs 42 thousand.

Although there are many pages, and ad campaigns that are running simultaneously on the platforms, for the purpose of the story we took the data related to some of the top pages, campaigns that involve the highest monies. Some of the pages are meme/parody pages, initiative pages, etc.

With the physical rallies banned till February 11, social media is going to be the playing ground for promotional activities for the parties in the five states. The ad spends by the various political parties, therefore, is going to be crucial for reaching out to the masses for the five Assembly elections.