How are brands celebrating Valentine’s Day this year 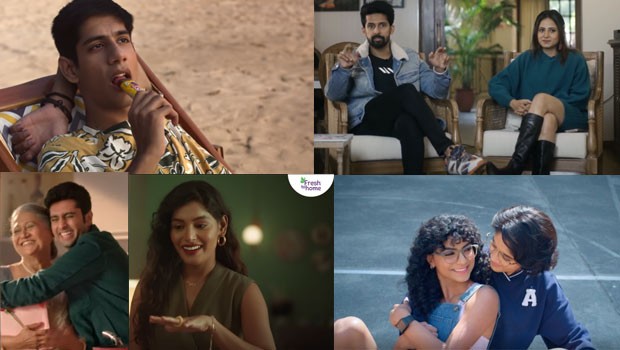 After two years of celebrating the season of love unusually due to the pandemic, people are eager to celebrate Valentine’s Day this year with their loved ones and to contribute to their excitement, brands have come up with interesting campaigns which have the day and the message of love at their core.

While most campaigns are usually targeted towards young couples, we also saw some quirky campaigns targeting singles and older couples. Brands have leveraged the current digital boom, as a result of which we see a number of these campaigns going digital, while some have remained old school and released brand films.

The brand took its proposition ‘Do Nothing’ a step further and got a solution for all the singles who are avoiding the ‘What are you doing on Valentine’s Day campaign?’. They have taken an actual island near Karnataka so that people can answer those questions with, ‘I’m not in town, going to my cousin’s wedding’.

To add to this, consumers can scan their 5star packs that leads them to a website to earn ‘nothingcoin’. These consumers stand a chance to win some gifts.

The brand has gone further and set up an embassy for the island in Mumbai where people can walk in and have a VR experience of the ‘My Cousin’s Wedding’ island and eat unlimited 5 stars and relax.

The brand has released a brand film and a campaign to promote their gifting kits for both men and women. The campaign ‘Made with Love, For Your Love’, is focused on thoughtful gifting and showcases relationships where people are looking for chances to gift each other something. It is being promoted through a brand film starring actors Sargun Mehta and Ravi Dubey.

The gifting kits are already customised but the brand is also adding a photo card that consumers can attach their personal photos and messages to.

Their #TrulyBeautifulME which is in collaboration with the dating app, Truly Madly, aims at telling the audiences to find beauty in little things and tells people to pay attention to things other than good looks.

Adding to the sentiment of the campaign, the dating app will encourage people to update their profile with a new question on, ‘What makes them beautiful?’ In the response, if they select Good Deeds, this will add a badge stating ‘Beautiful by Good Actions’ to their first profile picture on the app.

The campaign is being promoted through two brand films:

Taking the brand’s proposition of ‘Freshness’ ahead, the campaign showcases meat-loving couples that are ‘keeping it fresh by adapting to newer ways of expressing their feelings.

The eyewear brand from Lenskart is focusing on untraditional takes on concepts like LGBTQIA+ couple, self-love and breaking stereotypes by expressing love confidently and with pride.

The campaign is further being promoted through influencers like Gauhar Khan and her husband Zaid Darbar who are not shy to hide their 6-year age difference. It is also being promoted by the young couple Kshitiz and Shivangi, and Maitrayanee Mahanta who are all breaking stereotypes of love.

The brand’s #SpreadTheLoveVibes is promoting their new limited edition offers and the Instax Mini-series. The brand has introduced an AR filter on Instagram in different variations featuring various Instax film sizes. People can use these filters to express their love stories with the #LoveVibes.

Swiggy has launched a campaign that wants to solve the ‘anything’ dilemma couples go through when it comes to ordering on a date. They have partnered with ‘The Bowl Company’, which will customise some popular meals for couples from February 11 to February 14, 2022.

Instead of dishes, the menu has different moods for vegetarian and non-vegetarian cuisines that couples can choose from. For example, those who order ‘I’m Not Mad, I’m Just Not Hungry’ will get a Spicy Thai Basil Chicken with Garlic Fried Rice bowl. ‘Any Paneer Type Dish Is There Or What?’ meal is a Paneer Makhani Biryani.

The lifestyle and mobile accessories brand has released its ‘Tale of Two- Trilogy’ campaign conceptualised by the brand’s internal creative team.

Along with three short films, the brand also has an extensive digital marketing plan across social media and OTT platforms.

Preventive pet care brand Wiggles.in launched #LoveIsInTheCare, a digital marketing campaign ahead of Valentine’s Day. The campaign is an extension of the brand’s values and attempts to inculcate a spirit of never giving up on one's pet, no matter the circumstances.

Crafted around the core thought that the ultimate form of love is care, the #LoveIsInTheCare campaign brings to light the fact that pets step into our lives as blessings and ultimately need to be cared for just like any other family member or friend. The campaign explores different aspects around pet care such as teething problems, issues leading to loss of appetite, poor or diminishing eyesight, and how pet parents are the only ones empowered to help them overcome and deal with their problems thus reinforcing the campaign’s core ideology. It also brings together stories of pets suffering from trauma, inflicted with hip dysplasia, tragically hurt, the ones who have donated blood, and even the ones who were saved from being abandoned when they got terminally ill, wherein pet parents took them under their wing and carefully nursed and cared for them like their very own flesh and blood.

Speaking about the campaign, Anushka Iyer, Founder and CEO, Wiggles.in says, “Pets are at the heart of all that we do at Wiggles and it is only right that we celebrate them and pet parents who go above and beyond for them not just on Valentine’s day but every other day. Our campaign #LoveIsInTheCare is an extension of our belief about the importance of pet care. It is only when we care for our furry companions and face the odds together, that we can truly understand how much we love them. We hope this campaign connects with pet parents and non-parents as intended and helps them establish a more meaningful relationship with the pets and streeties around them.”

#LoveIsInTheCare celebrates the everyday moments where pet parents, while taking care of their pets, keep their pet’s needs before theirs without giving it a second thought.

The campaign is live across social media platforms, digital media as well as the Wiggles D2C website and is conceptualised and executed by the in-house creative team Wiggles.in.

The brand has introduced a new series of Lego sets for adults in line with the theme, “Build what you love’. To appeal to its fanbase, the brand launched over 40 bestsellers to appeal to its adult fanbase. The new collection has themes like vehicles, home decor, collectables, superhero, etc.

The brand has roped in celebrities like Kareena Kapoor Khan, Ranvijay Singhania and Harshvarrdhan Kapoor.

Since this year Valentine’s Day falls on a Monday, the brand has launched a campaign to show affection towards the day hated by most.

Through the #LetLoveIn campaign, the brand released a digital animated film along with a social media campaign and print ads.

The theme of the film revolves around Monday finally meeting its love and transforming from a moody to a happier person.