The satirical comedy web-series will release on January 6, 2022 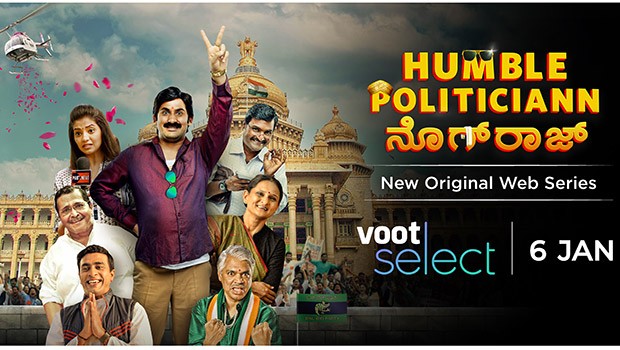 With a focus to reach out to newer audiences and markets across India, Voot Select is all set to make its entry in the Kannada market with its maiden Kannada language series ‘Humble Politiciann Nograj’ in 2022.

Produced by Applause Entertainment in association with Firstaction Studios and Danish Sait, ‘Humble Politician Nograj’ is written and directed by Saad Khan.

The web series is all set for release on January 6 on Voot Select. The satirical comedy is based on the critically acclaimed Kannada film with the same title.

The character Nograj, enjoys a strong following in the Kannada market owing to the character’s journey from being a voice on radio to making it to the silver screen.

By introducing the character to the digital ecosystem, Voot Select aims to leverage its existing fandom to broaden its base and win over viewers from the region.

Ferzad Palia, Head – SVOD and International Business at Viacom18, said, “At Voot Select, we have been constantly growing our content offering. The release of our first Kannada original reinforces our commitment to cater to audiences across the country and serve them entertainment in a language of their choice. ‘Humble Politiciann Nograj’ is the first in a robust list of regional originals that will drop over 2022. Over the next 12 months, we will significantly dial up our regional language roster, while we continue to strengthen our Hindi, international, sports and kids offering.”

Comedian Danish Sait said, “Humble Politiciann Nograj was such a success that we could not stop with just a film. The series takes the drama a notch higher. While the theme is familiar, what the audience will enjoy is the satirical humour spiked with comic tardiness. We have worked with some very talented and renowned actors to give the series its flavour and shape. All I can say is that the audience is in for a treat.”

Director Saad Khan said, “The art of taking something serious and turning it around with a dash of humour is a difficult thing to do. We approached writing the script keeping in mind that if our jokes are funny on paper, it would mostly translate to the visuals as well. Danish is a thinking actor and embodies Nograj with ease and comic finesse. Also, the genre of our show touches on political satire, and since all our characters are fictitiously funny, we are confident that it will leave our audiences entertained.”

The web series is filled with unexpected twists and turns as the corrupt and chauvinistic Nograj sets out on a journey from being an MLA to vying for the most prestigious post in Karnataka – that of the Chief Minister.

Sait will be seen as Nograj, a conceited and self-serving civil servant. The political potboiler will also star Prakash Belawadi, Vinay Chendoor and Disha Madan in key roles.

In addition to local activations in the Karnataka market that will target consumers, Voot Select will also promote the web series through social media activations and an influencer marketing programme.