The film by BBDO India brings to life the brand proposition of ‘You’re not you when you’re hungry’, and is available in nine languages 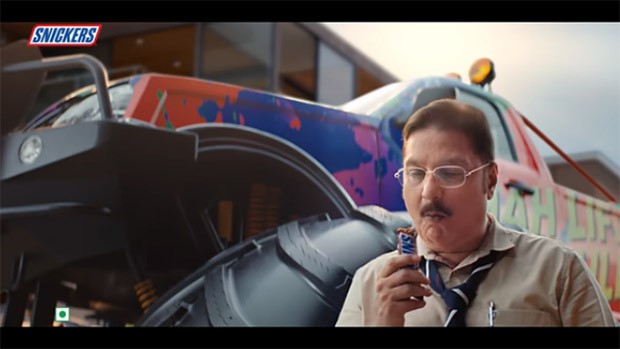 Snickers, the nougat, caramel and nuts filled chocolate bar from Mars Wrigley portfolio, is back with a new film starring actor Vinay Pathak alongside young artist Vedika Nawani. Bringing to life the brand proposition of ‘You’re not you when you’re hungry’, the film shows a humorous take on ‘hunger pangs’ that consumers have often seen and loved in iconic Snickers ad films.

The new TVC depicts departure from the usual change in personality of the protagonist, to an unusual and outlandish act or decision, as seen in the film where Vinay Pathak, portraying the role of a father, ends up buying a ‘monster’ truck during a hunger pang.

Kalpesh R Parmar, Country General Manager, Mars Wrigley, India, said, “The brand proposition of Snickers, ‘You’re not you when you’re hungry’, has become iconic and is loved by consumers across the world. With this new ad featuring actors Vinay Pathak and Vedika Nawani, we have drawn on the tongue-in-cheek humour of the brand to bring to life a comical situation arising out of hunger pangs. At Mars Wrigley India, we are led by our purpose of creating a billion better moments for consumers, customers and communities, and we are confident that the audience will love the new TVC as we celebrate the joy associated with Snickers.”

The film opens with Pathak, the father, cleaning the monster truck while his daughter, on seeing this, asks him what he is up to. The father is seen explaining that he has bought the monster truck to win the race. On being asked which race, he responds that he aims to win the “race of life”. The daughter, played by Nawani, shakes her head in disbelief and reaches out for a Snickers bar from her bag. The film ends with the father realising his mistake when he eats the bar of Snickers, while a voice over narrates ‘Jab insaan bhookh se totally pagla jae, usse Snickers pakadaye’. The film wraps up with the father inquiring about the return policy for the monster truck while indulging in Snickers.

Josy Paul, Chairman and CCO of BBDO India, said, “We built on the long-running global idea and human truth: when you’re hungry, you’re just not yourself. The task was to refresh it for immediate impact — something that will be instantly noticed, distinctive and drive salience for Snickers. The monster truck was it! The incongruity is intriguing! Why has our hero bought a monster truck? A-ha, it’s a hunger pang! And, of course, Snickers is the substantial, nut-filled bar that has always been known for satisfying hunger pangs!”

The film is available in nine languages — Hindi, Tamil, Kannada, Malayalam, Telugu, Bengali, Oriya, Gujarati and Marathi. The Hindi version of the film can be viewed in the link below: