The ad’s spin to wedding rituals has upset a few netizens who feel it is anti-Hindu, while others applaud it for being progressive. Mohey tells BestMediaInfo how challenging it has become for brands to touch religious subjects. It says brands must stand in solidarity with women despite all pushback and threat of falling into disfavour 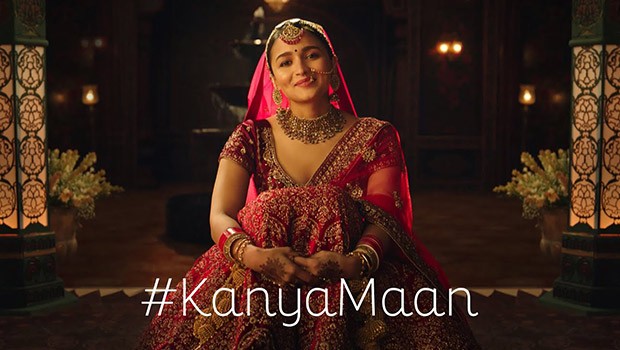 Bridal wear brand Mohey recently released a new commercial that promotes a redefined Hindu wedding ritual — from 'Kanyadaan' to ‘Kanyamaan. The ad featuring Alia Bhatt, however, didn't go down well with some netizens as they called out the brand for allegedly misinterpreting the Hindu ritual.

In the commercial, the actress is seen questioning the conventional beliefs where the family is required to ‘give away’ (Kanyadaan) their daughter at a wedding. Instead, in the ad, 'Kanyamaan', as it is called, highlighted the idea of respecting brides.

While some lauded the brand's progressive thinking, others slammed the bridal wear's alleged ‘anti-Hindu’ propaganda.

In an interaction with BestMediaInfo, the company’s (Vedant Fashions) spokesperson said the ad doesn’t challenge the ritual. He spoke about the challenges brands face today in experimenting with creative involving religion aspects and also the progressive content its brands, including Manyavar and Mohey, are known for.

“Mohey is a progressive and forward-looking brand and keeping with the brand spirit, Kanyamaan represents the modern-age bride, who deserves and strives for an equal footing in marriage. While the sanctity of our traditions and rituals is unquestioned, a tiny change in how we approach them can make a big difference in making a young bride feel loved and respected. And the intention of addressing this landed the creative process at the idea of Kanyamaan. We want to bring about a positive change in the society,” he said.

When pointed out that it is upsetting some people as they believe it goes against their religious sentiments, he justified that in the new ad film, everything remains the same, only a new meaning is being highlighted, Kyun sirf  Kanyadaan…naya idea Kanyamaan.

In the ad film, the ritual is not being challenged but being performed, where the bride and groom have equal participation and are entrusted responsibility for each other.

He said that the brand’s target universe has loved and appreciated the ad and it has struck a chord with many.

However, there are some who felt it went against Hindu traditions.

Manyavar is continuously offending hindu feelings by there toxic propoganda.. Fyi its daan of surname not of girl. Who ever is still thinking of buying from this brand is doing a huge disrespect to hindu religion #Kanyamaan

“Kanyamaan represents a modern-age bride who deserves and strives for an equal footing in marriage. The true spirit of the ritual Kanyadaan, which is indeed Kanyamaan, underlines respect and equality for women. Rooted firmly in the tradition, Kanyamaan is a new approach that appeals for equal respect and dignity for women. The message is being communicated in the right spirit across communities,” he added.

Brands that face criticism on social media often pull down their ads, even after having made such large investments in the campaigns.

For instance, last year jewellery brand Tanishq had to withdraw its ad for its Ekatvam collection after facing a huge backlash on Twitter for hurting religious sentiments. It had also pulled down another ad that advocated a cracker ban in Delhi after criticism.

A few experts had then urged the brand to have a spine while others appreciated its efforts for acknowledging the consumer sentiments.

Speaking on what brands should do when caught in controversies like this, the Mohey spokesperson said, “It is important to strike a balance here. Brands should, of course, stand by the communication, also because that communication has been created for its customers and for the overall good of the society. In both the cases—standing by the communication or pulling down the ad at some point, what stays in the foreground is customer sentiment.”

But has it become challenging for brands to deal with religious subjects given the sensitivity among audiences?

He said, “It has become challenging indeed, but also because there is a dire need of such conversations in society now. Changes come with their set of challenges, but they are also important. Our ad has been created with a very simple objective of appealing for a more equal space for women in marriage and all other spheres of life. And this has been done without hurting the sanctity of the core ritual. So according to us, associating a religious angle to this ad is diverting from its main intended essence.”

Women are coming out in support as it is so relatable to their own experiences, he said.

“Just like Mohey, all other brands must continue standing in solidarity with women despite all pushback and threat of falling into disfavour,” he added.

Shreyansh Innovations, which headquartered in Kolkata, is behind this campaign. The brand has been working with this agency since its inception.

The ad is going all out on digital, covering all platforms, which is the brand's primary focus.

“This gives us a chance to sharply tap the right customer base. It also helps us in achieving online to offline conversions,” the spokesperson added.

The brand majorly is focusing on digital only this year, tapping all platforms and channels through native publishers, doing robust PR activities and collaborating with influencers to spread the word.

“We are focusing more on digital platforms since the pandemic, considering the paradigm shift that happened from offline to online during the situation,” he said.

Known for progressive content, both Manyavar and Mohey have influential faces such as Alia Bhatt, Ranveer Singh and Amitabh Bachchan on board.

He said that their association gives the brand an advantage of spreading the core thought to the right audience and seeding the concept in their minds. This also helps in great engagement and recall value among the audience.

In terms of growth amid the pandemic, business is looking great for Mohey and it has great expectations for the festive season with the hope of leveraging on its online platforms.

A lot of ethnic and apparel brands are often called out for not catering to plus size women. Asked if the company is incorporating all sizes under its gamut, he said the brand has sizes till 3XL and it happily caters to all sizes. Due to merchandising restrictions, it procures larger sizes on order only.