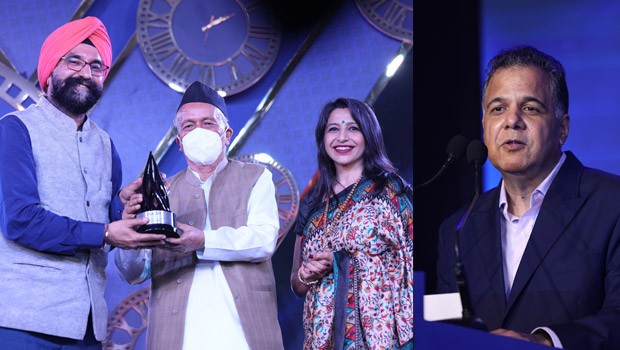 The International Advertising Association’s (IAA) India Chapter announced the winners for the eighth edition of the Leadership Awards at Taj Lands End Hotel, Mumbai. Zee was the presenting partner, Good News Today (GNT) was powered by partner and Viacom18 was the associate partner for the event.

RS Sodhi, Managing Director, Gujarat Cooperative Milk Marketing Federation (Amul) was honoured as the IAA Business Leader of the Year. IAA India inducted Raj Nayak into the IAA Hall of Fame for investing a lifetime in the marcom industry and for his role in directing the India Chapter of IAA towards its ongoing role in being the voice of sustainability.

The complete winners list of IAA Leadership Awards 2021 is placed below:

The chief guest at the event was the Governor of Maharashtra, Bhagat Singh Koshyari. He said “I think all of you are so prevalent, which is why I will speak only one name, anant. I think all of you are anant. There is no end to any of you. So I will say only one word anant and the other word avinash. Aap me se kisika vinash nahi hona hai.”

IAA President, Megha Tata said, “It is so rewarding to see the best in the business taking the time to be here and accepting these awards tonight. While we were planning the awards for 2021, we wanted to highlight leaders that have established new-age businesses. We wanted them to share the stage and form a balance between those that have run the country and the world.”

She said, “For one thing this year has taught us is to be agile. In the year 2020 we have used and misused the terms unprecedented times quite a few times. We use the term to showcase the problem, the troubles, the challenges but it also led to unprecedented growth, unprecedented opportunity and unprecedented victories. We have seen time and again that change or unexpected situations often lead to some brands or organisations and people succeeding while some may collapse. The difference between the two begins right at the top with the leader. And while I can describe our leaders tonight in many ways, I would just like to say that these unprecedented times call for unprecedented leadership and our leaders today definitely delivered on that.”

Nandini Dias, Co- Chair, IAA Leadership Awards, said, “We often talk about the glass half empty or half full, about optimism and pessimism, about positivity and negativity. But the truth is it doesn't matter if the glass is half empty or half full. What only matters is how thirsty you are. Which brings us to the definition of leadership. True leadership is often about perspective, inner perspective. And for men and women with vision it is not always about different things, but sometimes it's about the same things differently. That’s when one understands what leadership is actually made of. Leadership is not a talent, an art form or a science. It is simply about taking the first step in spaces where there are no written rules. So you make your rules because you make your own limits.”

Sodhi said, “I am honoured to receive the Business Leader of the Year Award 2021 from the International Advertising Association. This is the most prestigious award in India for marketing and advertising. So I feel very privileged and honoured. I have learned a lot from people right from my retailer to the people sitting here because we interact with the best in the advertising and marketing industry. I would like to tell you one thing: in today’s time the advertising and marketing field has garnered a lot of importance. There are so many retailers coming into the market. The pressure is growing. In order to prove yourself, you have to be creative, and when you bring that creativity into the local language, you will be closer to earth and you will be relevant in the industry.”