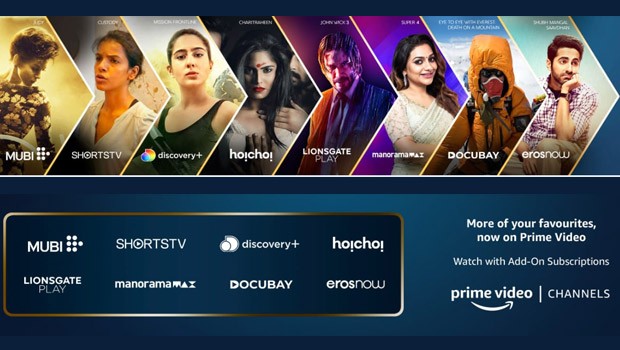 Amazon today announced the launch of Prime Video Channels in India aimed at providing its prime members with a seamless experience and access to a distinctive slate of content from a diverse set of popular video streaming services.

Addressing customers’ need for a hassle-free entertainment experience, simplified discovery and frictionless payments, Prime Video Channels, acting as an intermediary, will allow Prime members the option for add-on subscriptions of popular OTT services and stream their content on the Amazon Prime Video app and website in India.

“The launch of Prime Video Channels will mark yet another step towards making Amazon Prime Video the preferred entertainment destination for customers in India,” Amazon said in a press statement.

At launch, Prime Video Channels will give Prime members the option to watch global and local binge-worthy content including thousands of shows, movies, reality TV, documentaries etc., from eight video-streaming services including discovery+, Lionsgate Play, Docubay, Eros Now, MUBI, hoichoi, Manorama Max, and Shorts TV – each accessible with respective add-on subscriptions.  Customers therefore will need to pay only for the service they choose. At launch, Prime members can enjoy a special introductory annual subscription offer made available by the OTT channel partners.

“At Amazon, we have always focused on improving access, experience and selection for our customers,” said Gaurav Gandhi, Country Manager, Amazon Prime Video, India. “Over the last 4 years, we have continuously strived to entertain and delight our customers by programming in 10 languages, making available Exclusive and Original content from India and around the world and by ensuring a world class streaming experience across screens. All of this has made Amazon Prime Video the most loved premium streaming service with viewership from 99% of India’s pin-codes. With the launch of Prime Video Channels, we now take the next big step in our journey to entertain India by creating a video entertainment marketplace – first of its kind in India – which will not only delight our customers by giving them even more entertainment choices, but also benefit the OTT Channel partners who collaborate with us to leverage Prime Video’s distribution, reach and tech infrastructure.”

Prime members will be able to subscribe to Prime Video Channels offering programming in local Indian languages such as Bengali with hoichoi and Malayalam with Manorama Max, and a selection of award-winning documentaries and short films from Docubay and Shorts TV respectively. Consumers can enjoy blockbuster and quality cinema from Lionsgate, MUBI and Eros Now, across languages and genre, while discovery+ adds an array of Wildlife, Adventure, Science, Food, Lifestyle content. The new channels and their popular titles like The Father, Byomkesh, Star vs Food, Haathi Mere Saathi will now be available alongside customer favorite Amazon Originals like Shershaah, Mirzapur, Paatal Lok, The Family Man and The Tomorrow War, so there’s no need to toggle from app to app.

Prime Video Channels subscriptions and annual pricing in INR available at launch in India include: