M&E industry pins hopes on I&B Minister Anurag Thakur, IT and Communications Minister Ashwini Vaishnaw to free it from shackles of bureaucratic overregulation

Both the digital and broadcasting sectors need to be freed from the shackles of excessive government control. Can the new ministers, who have an industry-friendly image, alleviate the industry's pain and put it back on the growth track? 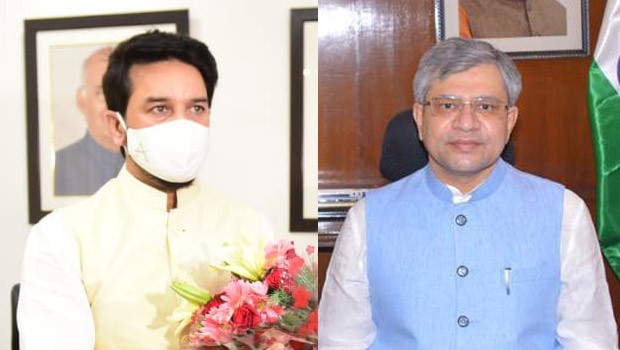 After the largest-ever reshuffle and new inductions in the Prime Minister Narendra Modi’s cabinet, the struggling media and entertainment industry, which is one of the largest job providers, has got Anurag Thakur as Information & Broadcasting (I&B) Minister and Ashwini Vaishnaw as Information Technology (IT) and Communications Minister.

The content part of the media industry falls under I&B Ministry while the Ministry of Communications' Department of Telecommunications is responsible for the distribution part. Except OTT, all other online media including social media intermediaries fall under IT Ministry.

On the other hand, Ashwini Vaishnaw, Rajya Sabha MP from Odisha, is a newcomer and has been given charge of the Electronics and Information Technology, and Communications ministries along with Railways. An MBA from Wharton School, Pennysylvania University, and MTech from IIT Kanpur, he has held leadership roles across major global companies such as General Electric and Siemens.

BestMediaInfo lists the most critical issues seeking immediate attention with a focused approach to resurrect the media and entertainment sector, which is projected to increase at a CAGR of 13.5% from 2019 to 2024 and estimated to reach US$43.93 billion (approx Rs 330,000 crore) by 2024.