Rediffusion is going back to its old spirit of ’70s and ’80s where clients used to be intimidated by us: Kamlesh Pandey 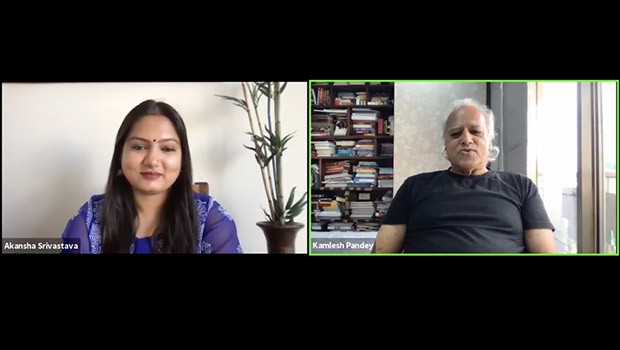 Rediffusion recently announced that advertising legend Kamlesh Pandey is returning to the agency as ‘Legend in Residence’ from June 1, 2021. He was Creative Director at the agency from 1976 to 1992 and had returned for another short stint in the late ’90s. He had earlier left Rediffusion after he got an opportunity to work at Zee TV as programming head, a designation no one in India had seen at that time.

In a conversation with BestMediaInfo.com, Pandey shares what brings him back to the agency and talks about his early journey in the world of advertising.

Speaking about his return to Rediffusion, he said he shares a special bond with people such as Arun Nanda and Ajit Balakrishnan. “I never really left Rediffusion. I have remained in touch with Arun, Ajit and other people because we shared a period, spirit and DNA of advertising in this country that you can’t get rid of. I never left Rediffusion mentally or emotionally,” Pandey said.

Pandey said even though he was leaving the agency, Nanda kept his position open. He said he had an offer from Zee TV to be the programming head, a job he had no idea about because this country never had a head of programming. There used to be IAS officers who decided what is run on Doordarshan.

“I wanted to see what this medium is. I believe TV is more powerful than films and advertising because it is repetitive and addictive. It is right inside your homes like electricity and water. I thought this is my chance to show what can be done with Hindi satellite TV. Arun said you can have your sabbatical for three months but I am keeping your job.”

When asked if he sees his current role as a challenge, he said he does not see returning to Rediffusion as a challenge but also does not subscribe to terms like ‘Legend’. “Sandeep Goyal (MD at Rediffusion) is a friend and sometimes friends say nice things. I will be working from my residence and occasionally go to the office when I am needed. It is not a challenge because I had left Rediffusion after a long time and returned in between for a short period.”

Asked about some remarks about the agency having Pandey as its only magic trick, he said he does not take people who have opinions about Rediffusion and him seriously. “People can be jealous. It is not like Rediffusion does not have any other tricks. Rediffusion is now going back to its old spirit, like the ’70s and ’80s when the agency was the benchmark for creativity. Our clients used to be intimidated and no one could say no to our work because they will be seen as the ones who don’t understand advertising. They were in awe of Rediffusion.”

The veteran said that coming from Ballia town, he was not very good in the English language and joined Hindustan Thompson as a junior copywriter. Sharing an interesting story about his first job, Pandey said, “My job application is still a historical document in advertising because it said, ‘I need a haircut and if you can give me a job I can get a haircut’. My luck was that on the other side, the creative head was not Indian, but an Australian. He called me and said he doesn’t have anything right now but asked me to call him after three months. It was luck because I had been struggling in Mumbai for four years and dropped out of JJ School of Applied Arts. I used to go hungry for days and survive on tea. When I went back after three months, he gave me a copy test and said even though the spellings are wrong and the grammar is worse, I will be the best one day. I went on working on that promise to prove him right.”

“People used to call me country bumpkin at Hindustan Thompson because of my English and I wanted to prove that this country bumpkin from Ballia can win the best copywriter award for four years straight,” he added.

Pandey spoke about the passion that drove him to do the best and said he and his colleagues at Rediffusion would be restless to go to the office to see what assignments they will be solving for the day. “For me, this is about going back to the same spirit and roots. We have created some of the best campaigns in the loo. The famous iconic line for Jenson & Nicholson ‘Whenever you see colour, think of us’, actually struck our minds in the loo and ran for so many years.”

He said they won the account for Eveready at a time when most big agencies were chasing it. He said their trick was to un-sell their ideas to the client. “Arun took 4-5 campaigns for presentation and showed them the campaigns one by one and after each presentation he said, this one is not for you even though the client loved them all. He went on to un-sell the ideas. Towards the end, the client got frustrated and told him, okay tell us what to do. He then showed them the campaign that was chosen for them. We used to un-sell our work to clients. This is what built our reputation and guts.”

There was a time when Pandey won the Best Copywriter of the Year Award for four years in succession, which he later stopped entering to give other people a chance. He said he took inspiration from Lata Mangeshkar, who stopped entering her songs for Filmfare to give younger singers a chance.