The IT rules, 2021, clearly state that ‘news and current affairs’ is not covered under the ‘online curated content’ definition. But the platforms claim the rules are open to different interpretations as the same rules also say ‘all content’ by the publisher of online curated content should be rated 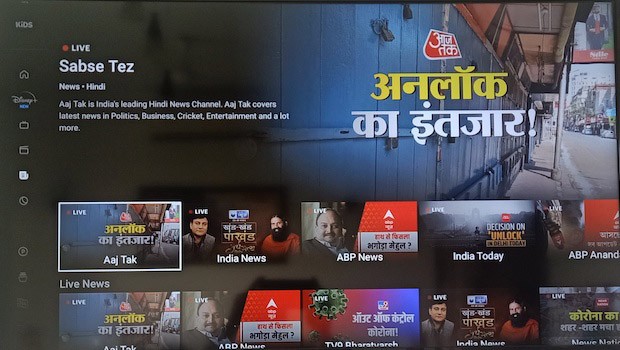 The new IT rules, 2021, have forced content streaming providers such as Disney+ hotstar, Zee5, Voot, Sony Liv and other such aggregators to de-board news channels from their platforms.

The OTT platforms say the new rules mandate that all content on their platform should be rated and it is impossible for them to rate news.

The IT rules, however, say that ‘online curated content’ does not include news and current affairs. But the latter part of the rules also states that ‘all content’ should be rated.

A top executive at an OTT platform said that the given ambiguity keeps the rules open to interpretation.

“The government should have clearly stated that news is out of the purview of rating requirements. In light of the current ambiguity, it is safer for us to remove news altogether from our platform. Our decision is on the basis of legal opinion we have received,” he added.

When approached for comment, at least two news channels confirmed the development but denied to speak on this, saying the News Broadcasters Association and News Broadcasters Federation were taking up this matter with the ministry.

Last week, NBA President Rajat Sharma in his letter to I&B Minister Prakash Javadekar urged the government to exclude digital news platforms of traditional media from IT Rules, 2021. The letter raised a wide range of topics, from multiple regulations to blocking of content, but it did not make a direct reference to news channels being dropped by OTT players.

A senior official at a news network told BestMediaInfo.com that the news channels being exempted from the new IT Rules will enable all OTT platforms and intermediaries to carry their live feeds uninterrupted. However, the official believed there is nothing ambiguous when it comes to the classification of news and current affairs content and the interpretation of OTT players is far-fetched.

What do the rules state?

According to level 1 of the self-regulating mechanism prescribed in the new rules, “online curated content shall be classified by the publisher of such content into the categories referred to in the Schedule, having regard to the context, theme, tone, impact and target audience of such content, with the relevant rating for such categories based on an assessment of the relevant content descriptors in the manner specified in the said Schedule.”

The guideline further says, “Every publisher of online curated content shall display the rating of any ‘online curated content’ and an explanation of the relevant content descriptors, prominently to its users at an appropriate place, as the case may be, in a manner that ensures that such users are aware of this information before accessing such content.”

Now, in both the paras above, it is clear that the rules are talking about the ‘online curated content’, which does not include ‘news and current affairs content’.

According to the definition given in part 1, ‘Online curated content’ means any curated catalogue of audio-visual content, other than news and current affairs content, which is owned by, licensed to or contracted to be transmitted by a publisher of online curated content, and made available on demand, including but not limited through subscription, over the internet or computer networks, and includes films, audio visual programmes, documentaries, television programmes, serials, podcasts and other such content.

So which part is ambiguous according to the OTT players?

In fact, the ‘content classification’ descriptor under ‘Code of ethics’ says, “All content transmitted or published or exhibited by a publisher of online curated content shall be classified, based on the nature and type of content, into the following rating categories.”

Even as this descriptor part of content classification is under the title ‘online curated content’ which does not include ‘news and current affairs content’, the usage of the term ‘all content’ is raising fear among OTT platforms.

A senior official at an OTT player explained the reason behind the fear about this ambiguity. “Even as you say that the ‘all content’ is used under the header ‘online curated content’, the rules have to have clarity in language, leaving no space for ambiguity. What if it is interpreted the other way round by another government or official to frame any OTT player. Why should we take any risk unless this is clarified by the government?”

Tags: OTT players to stop streaming The IT rules 2021
Advertisment
More from this section