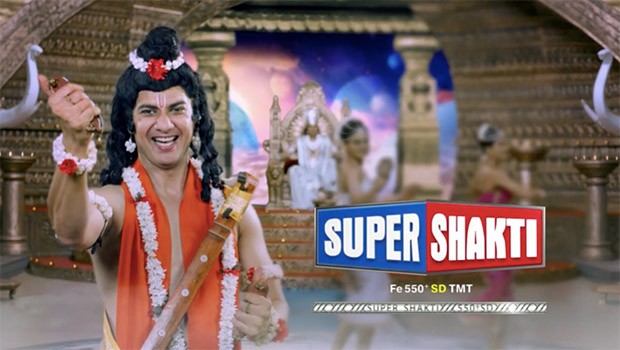 “Thanks to digital mediums, people do a lot of contextual work around festivals when brands wish on occasions such as Ganesh Chaturthi. So it is fine there. However, if you’re selling a product there, I don’t think it is right,” added Singhania.

Speaking about the depiction of Gods and religion, independent creative Soumitra Karnik said, “Religion sells the most. It is the largest selling category if I put a marketing term. While we can keep debating that it is a personal choice, especially in a country like India where faith rules over everything, there are some brands and companies that will quickly cash in on it.”

“If you were to be a fly on the wall in these conferences, you will find that there is nothing wrong. Let’s cash in on the largest selling thing when it is relevant. Strategically, they think right; logically and technically also it seems right. However, ethically it seems absolutely incorrect. It is the worst mistake one can do because religion is a very private thing. Even politics has used religion, which gives way to only divisiveness. The minute you start playing one religion over another, then there is a problem. Your beliefs could be offensive to another religion. Every time there is a dialogue between two opposing parties, camps will be divided and the environment is bound to become toxic. What started off as a larger selling thing only gives a negative result.” On the other hand, Sumanto Chattopadhyay, Chairman and CCO 82.5 Communications, said context is important to understand the sentiment behind the ad. “Depiction of Gods is part of our cultural iconography. In Bengal, for example, there is a tradition of affectionately depicting Ma Durga and her family in light-hearted situations in all magazines and papers that come out during Durga Puja. Bengalis think of the Gods and Goddesses as loved ones—almost like family. So there is no offence meant and none taken by Bengalis. This sort of portrayal naturally spills over into advertising as well. Sadly, in the recent past, when a hair salon followed this tradition, it faced severe flak—mostly from outside Bengal. Thanks to digital media, nothing meant for local consumption remains local anymore. The fact that the salon was associated with a name from the minority community made matters worse. The trolling escalated to such an extent, even an apology did not suffice and I think the establishment had to shut down,” he explained.

“On all the businesses that I've been a part of, we have actively and consciously decided to stay away from certain topics or subjects or anything to do with socio-political, cultural aspects that may be provocative or that may be offensive and that may hurt the sensibilities of even a very small segment of people or even one person,” said Babita Baruah, Managing Partner, GTB India.

“What we think is a very relevant message or a smart message using the picture of a god or an idol, may not be what the viewer looks at. For a viewer, the respect and the position of an idol are that, it is never to be used for anything commercial. That's the place that religion has in people's minds. I think as brands or marketers, we are not in the right place to do anything that hurts those sensibilities,” she added.

When asked about such ads, Singhania said, “I don’t think they harm the brand. It is just the trolls that get people to talk about it. In other worlds, they (Tanishq ad and Surf Excel ad) would be considered beautiful ads. There is no negativity there. All this is happening because of trolls and the way certain sections of society are reacting. Brands are now starting to steer clear because they don’t want to steer into that controversy. Even a controversy is okay but people are taking it to another level where marketing people are getting threats. So why would someone want to risk that?”

“Unfortunately India today has come to a situation where we are very intolerant. If you go a few decades back and see the popular culture, a movie like Bombay, which was about a Hindu and a Muslim falling in love and getting married, was celebrated. It was the best picture. Even before that, Mohan Desai showed Hindu, Muslim, Christian as brothers in ‘Amar Akbar Anthony’. As a culture, we used to be very tolerant and embraced other religions. Unfortunately, the new India is becoming more and more intolerant. I don’t think there is anything wrong with it, the narrative should be encouraged. Because of the trolls, people just avoid going down that road. It is unfortunate that the likes of the Tanishq ad were targeted,” added Singhania.

Citing similar views, Chattopadhyay said, “It is indeed a sad day if the liberal and secular ideals on which this country is founded can end up harming a brand. I think the biggest harm that I see from all this is to Brand India.” He said agencies must be careful as companies face vandalism and physical harm to employees.

“The problem with everyone today is that the minute you hear religion, a context of religion or a context of Hindu-Muslim, you don't even bother watching the rest of the 30 seconds or 40 seconds and allow it to finish the message and find out it is actually unity. They have started seeing things that were not intended, which means you are already brainwashed. The politicisation of religion is already happening. We are not living in separate compartments. We live in unidimensional worlds when we are surrounded by such news and dialogues, and then we are exposed to that ad, we already are in that state of mind. We don’t allow our thinking to be detached and let the ad be over and think about the message behind it. Hardliners cannot reach this stage and create such a ruckus that even people who are fence-sitters end up thinking something must be wrong,” said Karnik.

He said that brands are very sensitive to what people perceive and think. “Brands are very sensitive to the outcomes and people’s perception so they quickly pull out the ads. That is a defeat every single time. Advertising was supposed to be a progressive industry. When we do purposeful advertising like ‘Share the load’ we are supposed to change the thinking, the ideology and the progressive. At best we are the mirror of society. We cannot be embroiled in controversy and be a part of actually pushing society backwards.”

Karnik said while as a marketer, one might think they are being progressive and giving out a good message, they might also end up hurting someone. “I might as well stay away from it in today’s day and age. A few years later again, there must be a time where it will be okay to say such things. Hence you wait for the right time to deliver the right message.”

When asked if marketers and agencies should be more careful about adapting to such messages, Baruah said brands don’t have the right to be provocative over people’s sentiments. “My point is that creativity to a huge extent is democratised. Earlier most of the creatives we saw around us were created by people who were certified to be creative. Today we have digital platforms, where there is creativity in every post. As people also we have been exposed to so much of good creatives that I feel for brands, marketers and advertisers — there is a lot of pressure to be even more creative than before. In order to stand out, we use edgy creativity or edgy messaging. Edgy also means provocation and it can mean good provocation, which gets us to rethink and look at certain aspects of society. We see a lot of ads talking about the empowerment and progressiveness of women which is good and there are already so many conversations going around it. To me, when you get into social debates that can end up looking like offensive and hurt sensibilities, we know what the repercussions could be. There have been instances where such messages have led to employees of that organisation being threatened with a death sentence. Is it worth it? I definitely don’t think so. Brands have the right to be provocative but not at the cost of hurting sensibilities.”

“It appears that we have become a completely intolerant nation—so bans and regulation are the order of the day. I do not believe in them though,” said Chattopadhyay.

“Regulation has to be there to avoid unnecessary trouble in society. I would say for lack of any idea, if you are using a picture of any God and thinking that it will capture eyeballs or controversy then it’s a very poor form of thinking or creativity. Brands cannot afford this kind of trouble,” said Karnik.

“Advertising people must deliver messages. Mile Sur Mera Tumhara was a national integration at one point. I feel there should be more regulators, judiciary and society which should allow creating a benchmark. There could be rulings and judgements on such ads where a committee can say there is nothing wrong with the ad and it can run. Regulation can also say they will not allow unnecessary exploitation of religion. However, as a regulator, I will also allow something that is brave and positive in its content. Society needs to learn messages of unity and secularity,” Karnik said.

Talking about regulations, Baruah said some regulation is required, so that marketers can know which areas they need to be careful about. “I do believe that a set of guidelines are needed on what could be some of the areas that marketers and advertisers have to be very conscious of. She said while putting regulations might be difficult, as many areas in advertising are contextual, they will allow advertisers and marketers to be conscious when they consider such conversations.”