Terming the guidelines as soft touch regulations, the government said there was an urgent need to address rising user grievances related to social media, OTT platforms and online news platforms 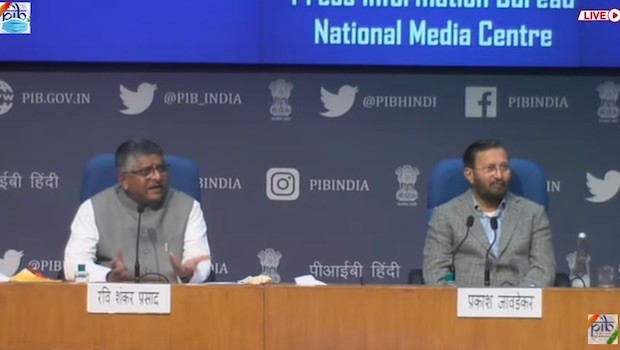 The government has brought out new guidelines for digital media, which includes digital news platforms, social media and OTT platforms, to make them more accountable for the content on their platforms. In a press conference addressed by Prakash Javadekar, Minister of Information and Broadcasting and Ravi Shankar Prasad, Minister of Information and Technology, they said that the guidelines is to create a level playing field for all the media platforms.

Titled Information Technology (Guidelines for Intermediaries and Digital Media Ethics Code) Rules, 2021, the code has reduced the response time for social media platforms to pull down objectionable content from their website 36 hours from the earlier 72 hours. After pulling down the objectionable content, social media platforms are expected to preserve that information as evidence for 180 days.

The Code mandates that social media platforms appoint a Chief Compliance Officer, a nodal person for coordination with law enforcement agencies and a resident grievance officer, who’s contact details need to be published on the portal. It also mandates social media intermediaries, whose primary services are in the nature of messaging, need to trace the originator of information. They also need to publish a monthly compliance report.

“Social media is welcome to do business in india. They have done well and empowered ordinary Indians. The government welcomes criticism and right to dissent. But the users also need a platform to address the grievances in a time-bound manner,” said Prasad in the press conference.

Though the government had brought online news portals under the ambit of the Ministry of Information and Broadcasting last year, they were still largely unregulated as there were no guidelines to govern them. The government now wants to bring them at par with traditional media, that is newspapers and television news channels. By bringing them under the ambit of the Information Technology Act, they now have powers to takedown content.

According to the new guidelines, the Press Council of India Act, 1978, and Cable Television Networks Regulation Act, 1995 which hitherto governed newspapers and television respectively, would apply to online news and current affairs portals under the Code of Ethics.

To be classified as a news publisher, it would have to operate in India and also have at least 500,000 subscribers or 5 million followers on a social media platform. They will have to register with Broadcast Seva, a government run portal.

For OTT platforms they have mandated content rating, including a universal rating (U), U/A seven plus, U/A thirteen plus, U/A sixteen plus and Adult for people over 18. They would also have to enable access control mechanisms, including parental locks, for those over 13.

To ensure the observance of the Code of Ethics, the government has constituted a three tier-structure- the first level would be self-regulation by the platform itself, followed by self- regulation by industry bodies and lastly by oversight mechanisms that includes an inter-ministerial committee. The Ministry will also establish an online Grievance Portal, for receiving and processing all public grievances with regard to the Code of Ethics.

“Freedom of speech is the spirit of democracy. But it has to be responsible freedom and so we have created a three-tier check. Since there is no censor board for OTT so we need them to self classificy the content based on age and also provide a mechanism for parental lock,” said Javadekar at the conference.

IT Minister Ravi Shankar Prasad had told Rajya Sabha in February that the government was in the process of bringing new rules for social media intermediaries to make them more responsive to the government’s directions.

Guidelines related to Social Media to be administered by Ministry of Electronics and IT:

* Grievance redressal mechanism: The Rules seek to empower the users by mandating the intermediaries, including social media intermediaries, to establish a grievance redressal mechanism for receiving resolving complaints from the users or victims. Intermediaries shall appoint a Grievance Officer to deal with such complaints andshare the name and contact details of such officer. Grievance Officer shall acknowledge the complaint within twenty four hours and resolve it within fifteen days from its receipt.

* Ensuring Online Safety and Dignity of Users, Specially Women Users: Intermediaries shall remove or disable access withing 24 hours of receipt of complaints of contents that exposes the private areas of individuals, show such individuals in full or partial nudity or in sexual act or is in the nature of impersonation including morphed images etc. Such a complaint can be filed either by the individual or by any other person on his/her behalf.

* Additional Due Diligence to Be Followed by Significant Social Media Intermediary:

* Appoint a Chief Compliance Officer who shall be responsible for ensuring compliance with the Act and Rules. Such a person should be a resident in India.

* Appoint a Nodal Contact Person for 24x7 coordination with law enforcement agencies. Such a person shall be a resident in India.

* Appoint a Resident Grievance Officer who shall perform the functions mentioned under Grievance Redressal Mechanism. Such a person shall be a resident in India.

* Publish a monthly compliance report mentioning the details of complaints received and action taken on the complaints as well as details of contents removed proactively by the significant social media intermediary.

* Significant social media intermediaries providing services primarily in the nature of messaging shall enable identification of the first originator of the information that is required only for the purposes of prevention, detection, investigation, prosecution or punishment of an offence related to sovereignty and integrity of India, the security of the State, friendly relations with foreign States, or public order or of incitement to an offence relating to the above or in relation with rape, sexually explicit material or child sexual abuse material punishable with imprisonment for a term of not less than five years. Intermediary shall not be required to disclose the contents of any message or any other information to the first originator.

* Significant social media intermediary shall have a physical contact address in India published on its website or mobile app or both.

* Giving Users An Opportunity to Be Heard: In cases where significant social media intermediaries removes or disables access to any information on their own accord, then a prior intimation for the same shall be communicated to the user who has shared that information with a notice explaining the grounds and reasons for such action. Users must be provided an adequate and reasonable opportunity to dispute the action taken by the intermediary.

* Removal of Unlawful Information:An intermediary upon receiving actual knowledge in the form of an order by a court or being notified by the Appropriate Govt. or its agencies through authorized officer should not host or publish any information which is prohibited under any law in relation to the interest of the sovereignty and integrity of India, public order, friendly relations with foreign countries etc.

Digital Media Ethics Code Relating to Digital Media and OTT Platforms to Be Administered by Ministry of Information and Broadcasting:

There have been widespread concerns about issues relating to digital contents both on digital media and OTT platforms. Civil Society, film makers, political leaders including Chief Minister, trade organizations and associations have all voiced their concerns and highlighted the imperative need for an appropriate institutional mechanism. The Government also received many complaints from civil society and parents requesting interventions. There were many court proceedings in the Supreme Court and High Courts, where courts also urged the Government to take suitable measures.

Since the matter relates to digital platforms, therefore, a conscious decision was taken that issues relating to digital media and OTT and other creative programmes on Internet shall be administered by the Ministry of Information and Broadcasting but the overall architecture shall be under the Information Technology Act, which governs digital platforms.

Consultations: Ministry of Information and Broadcasting held consultations in Delhi, Mumbai and Chennai over the last one and half years wherein OTT players have been urged to develop “self-regulatory mechanism”. The Government also studied the models in other countries including Singapore, Australia, EU and UK and has gathered that most of them either have an institutional mechanism to regulate digital content or are in the process of setting-up one.

The Rules establish a soft-touch self-regulatory architecture and a Code of Ethics and three tier grievance redressal mechanism for news publishers and OTT Platforms and digital media. Notified under section 87 of Information Technology Act, these Rules empower the Ministry of Information and Broadcasting to implement Part-III of the Rules which prescribe the following:

* Self-Classification of Content: The OTT platforms, called as the publishers of online curated content in the rules, would self-classify the content into five age based categories- U (Universal), U/A 7+, U/A 13+, U/A 16+, and A (Adult). Platforms would be required to implement parental locks for content classified as U/A 13+ or higher, and reliable age verification mechanisms for content classified as “A”. The publisher of online curated content shall prominently display the classification rating specific to each content or programme together with a content descriptor informing the user about the nature of the content, and advising on viewer description (if applicable) at the beginning of every programme enabling the user to make an informed decision, prior to watching the programme.

* Publishers of news on digital media would be required to observe Norms of Journalistic Conduct of the Press Council of India and the Programme Code under the Cable Television Networks Regulation Act thereby providing a level playing field between the offline (Print, TV) and digital media.

* A three-level grievance redressal mechanism has been established under the rules with different levels of self-regulation.

1. Level-I: Self-regulation by the publishers;

2. Level-II: Self-regulation by the self-regulating bodies of the publishers;

Self-regulation by the Publisher: Publisher shall appoint a Grievance Redressal Officer based in India who shall be responsible for the redressal of grievances received by it. The officer shall take decision on every grievance received by it within 15 days.

Self-Regulatory Body: There may be one or more self-regulatory bodies of publishers. Such a body shall be headed by a retired judge of the Supreme Court, a High Court or independent eminent person and have not more than six members. Such a body will have to register with the Ministry of Information and Broadcasting. This body will oversee the adherence by the publisher to the Code of Ethics and address grievances that have not be been resolved by the publisher within 15 days.

Oversight Mechanism: Ministry of Information and Broadcasting shall formulate an oversight mechanism. It shall publish a charter for self-regulating bodies, including Codes of Practices. It shall establish an Inter-Departmental Committee for hearing grievances.