As things get back to normal, the pandemic finds no mention in the campaigns by most brands. BestMediaInfo.com brings some of 2021’s best advertisements that tried to woo the hearts of consumers 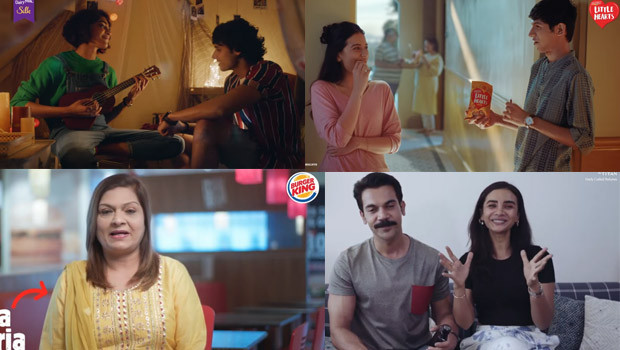 Just a few weeks ago, one must have thought that this year’s Valentine’s Day celebrations by brands would either revolve around Covid or would be clouded by the pandemic. But it turned out that neither the brands shied away from spending heftily on large-scale Valentine’s Day campaigns nor the context of most initiatives revolved around Covid. This year, Valentine’s Day was even more critical because it was the time for brands to make a comeback as life is gradually coming back to normal. Advertisements fetch great brand recall and those who make the most of it win the race.

Take a look at a few of this year’s Valentine’s Day campaigns:

Additionally, the brand created a Cadbury Silk Heart Pop Alexa skill, where the consumers can just say ‘Alexa, tell me ways to go far for love.’ and one can get Cadbury Dairy Milk Silk’s recommendations of romantic ideas, gestures to surprise and delight your partner, and prompts to even add Silk Heart Pop to his/her shopping cart as the perfect gift for the occasion.  Through a partnership with Bobble AI, the world’s first conversation media platform – the brand has created some Valentine-themed stickers, GIFs and BigMojis for consumers looking to express their love as part of their conversations on chat platforms. Further adding some rhythm and tunes to the V-Day, the brand is leveraging Spotify to launch a music playlist ‘Cadbury Silk Valentine’s Collection’.

As confessions of love begin during Valentine’s Day period, some find themselves at the start of a beautiful journey with their special someone, but many also go through heartbreaks. However, each romantic gesture can be a sweet memory to remember. So why not celebrate those sweet heartbreaks! With that thought in mind, Britannia Little Hearts launched a campaign to reminisce those deeds of romance and make someone’s heartbreak a little sweeter. One can send in her/his messages in the comments section of the film or as a DM to the brand. The film is then customised with their message at the end and gets shared over DM with the viewers, who can then, in turn, share the personalised AD with their heartbroken friends and cheer them up by saying that heartbreaks are sweet as well.

The campaign features the Internet’s match-making sensation, Sima Taparia. Popularly known as Sima aunty from the hit show Indian Matchmaking, here she is seen convincing customers to break away from their current relationship and move on to something better. It’s only when the camera pans that it is revealed she is referring to ending relationships with boring, dry and unsatisfactory Burgers and moving on to bigger, juicer, flame-grilled Whopper.

Skinn, the fragrance brand from the house of Titan, launched its digital campaign #BestSaidWithSKINN to celebrate Valentine’s Day with actor Rajkummar Rao and his partner Patralekha. Conceptualised by Ogilvy and produced by Interactive Avenues for the digital medium, this new film brings alive the thought that when words fail to express, it is #BestSaidWithSkinn. The campaign is built around the insight that people struggle to find words to their feelings and emotions, especially love. For those who don’t have a way with words, a thoughtful and special gift can say what they feel.

Chupa Chups’s ‘Do you love me’ campaign

Chupa Chups, the confectionary brand from the house of Perfetti Van Melle, launched its limited-edition lollipop range ‘Do You Love Me?’ before Valentine’s Day. The lollipops will now come with six different designs like ‘<3 You’, ‘BFF’, ‘Yes’ embossed on the lollipop. The exact design is a surprise, revealed only after opening the pack. ‘Do You Love Me?’ lollipops are fun conversation starters for teenagers, especially around Valentine’s Day. The campaign is led by a TVC showing a group of college-going friends playing a game of ‘Do You Love Me?’ with Chupa Chups lollipops. While the fate of the protagonists is left to the message on the lollipop, the real fun is the interactions within the group. The digital leg also includes an Instagram filter that was rolled out during Valentine’s Day week. The IG filter let the user find out if their crush loves them back through a gamified lens.

Oyo kickstarted its digital campaign ‘Long-term relationship with Oyo’, featuring Neena Gupta and Swanand Kirkire as the lead protagonists of its four digital films. Following the first film, ‘Same Hotel’, Oyo will roll out four digital films throughout February. These simple yet quirky films depict a middle-aged couple’s chemistry while travelling. The idea of the campaign centred around women is stemmed from an internal study that brought to light a very important insight — women were the key decision-makers when it came to booking a getaway, holiday, or vacation. In eight out of 10 cases, women drove the conversation and took the final decision around travel. Keeping these findings at the core of the campaign to drive overall consideration for the brand, Oyo decided to talk to the real decision-maker—women. The campaign focus on four main objectives: to enable, build aspiration, likeability, and last but not the least, communicate safety to its key stakeholder — women.

Parle’s Kismi enjoys immense love among consumers as the brand proposition resonates well with the target audience of young adults. Conceptualised by Rediffusion, the film showcases the adorable moments of two teens wherein ‘Kismi’ toffee plays the role of a cupid and an enabler. It is built on the brand thought of 'Har Kismi mein hai Kiss' showcasing a cute-awkward moment of a young couple where the flavours of Kismi save the day for them and make it memorable.

Viacom18’s branded content arm, Voot Studio and Mia by Tanishq, a part of the Titan Company, collaborated for the brand film that defines celebration and true love. Mia’s brand proposition is that even a small piece of jewellery is a beautiful way of saying ‘I Love You’. Echoing this thought, Voot Studio has conceptualised and created a 40-second film as part of a campaign that not just showcases Mia’s ‘The Cupid Edit’ Valentine’s Day collection but brings out the brand’s thought and value proposition for Indian consumers. The film communicates that you must explore newer ways of fun.