The industry is hoping that political parties would spend at least 25% more on outdoor advertising as compared to the last election season, helping the embattling advertising medium to recover from the jolt of Covid 19 pandemic

As assembly elections in the states of Uttar Pradesh, Uttarakhand and Punjab come closer, the outdoor industry is hoping that political parties would spend at least 25% more over the last polling season.

The firms that control most of the prime outdoor advertising are planning to charge almost double the average rates for political ads.

Political advertising has a higher rate card for all mediums including TV and digital.

Just to give a sense of the overall size of political advertising in the sector, parties reportedly spent as much as Rs 400 crore on outdoor ads during the 2019 General Elections.

There will be several OOH campaigns from all political parties, as the Uttar Pradesh Assembly election is one of the most important landmarks before the Lok Sabha elections due in 2024, and each party will try its level best to win in the most populous state in the country. This means everyone involved in the process will not hesitate in spending a significant amount on outdoor campaigning, said Amarjeet Hudda, COO, Laqshya Solutions, a division of Laqshya Media Group.

“The highest spends will be by the Bharatiya Janata Party, followed by Samajwadi Party, Congress, and the Bahujan Samaj Party. As per a rough estimation, there will approximately be a 25% increase in OOH spending as compared to the last Assembly election campaign,” he said.

“In OOH, media owners don't increase the rates by this percentage but, there will be some increase due to the supply/demand gap. If demand is high, a premium is charged. It is the usual practice, which is done for all clients, not just for political parties,” added Hudda.

The parties will try to cover every town and village, using OOH, to reach out and try to appeal to the last voter. The size of India's outdoor industry had reduced by almost 50% because of the impact of the Covid 19 pandemic. The size of the OOH industry is in the range of approx Rs 3000 crore-Rs 3500 crore, almost 5% of India's total adex.

In terms of investment benchmarks, Jayesh Yagnik, Chief Executive Officer, MOMS Outdoor Media, believes that all parties will battle for maximum SOV which will enhance the overall visibility. The battle gets more intense with each passing election and with the latest trends and life cycle of people it has been observed that OOH plays a vital role. Everyone would want to reach out to eligible voters in the most efficient way possible and this will certainly help the OOH industry.

Madison follows the rate benchmarking, Yagnik said, and added that he doesn’t believe that there would be a big impact on the rates.

“We at Madison, having been associated with election campaigns in the past, are well aware of the rules and benchmarks which help maintain a good SOV, at a good value,” he added.

All major parties are expected to spend big on OOH, as traditionally it has been the most preferred medium for election campaigns. 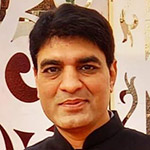 Parimal Modi, Head - Finance and Commercial, Khushi Advertising, said that BJP will continue to be the top spender, followed by Congress and other major regional parties like BSP and SP. He also agreed that there wouldn't be any significant rise in the ad rates in the upcoming elections.

Also, for most parties, the focus on digital, in terms of party promotions and campaigning, has risen considerably in the past few years. With the rising digital media focus, OOH's share in advertising has come down a bit, Modi said. However, one can expect around 30-40% share of spending on OOH, especially in states like UP.

In normal circumstances, the ratio would be in the range of 15% to 25%, but with variations in the costs associated with other media this ratio also changes, said Yagnik.

“The political spending this time will be at par, or even better, compared to previous elections as people are not as apprehensive about Covid-19 as they were in the past. It has become the new normal. In the last election, most people were inside their houses. Everyone is used to living with Corona now. As most people are stepping out of their homes, there is going to be a good emphasis on OOH advertising. There is a big demand so OOH properties could go off the shelves quickly,” Radhakrishnan said.

He added that OOH players will double their rates for political parties.

OOH activities like meetings, activations, engagements comprise about 60% of the campaign ad spending, he said. The balance will be from print, radio, and TV ads.