A joint working committee should be set up between NBDA and BARC to ensure that all the issues are addressed before viewership data for the news genre is resumed, NBDA President Rajat Sharma said in a letter to BARC CEO Nakul Chopra

The News Broadcasters and Digital Association (NBDA) has asked BARC India to refrain from hurriedly resuming the release of TRPs for the news genre unless all issues that led to the suspension are fixed.

​​In a letter to BARC CEO Nakul Chopra earlier this week, the content of which has been confirmed by reliable sources, NBDA President Rajat Sharma also proposed the setting up of a joint working committee between BARC and NBDA to sort out all the concerns of the TV news industry before the viewership data for the genre is resumed.

The TV news viewership data has been suspended for a year, ever since the TRP scam was unearthed by Mumbai Police. 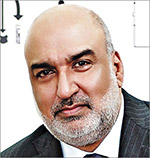 According to the sources, the letter comes in the backdrop of a recent meeting between Chopra and NBDA members, where Chopra is said to be of the view that the resumption of ratings for the news genre is urgent, a line that was pressed by the Arnab Goswami-led NBF in its letter to Chopra on September 24.

NBF has been urging BARC to resume the data at the earliest. Some in the TV industry are of the view that BARC is unduly being pressured by NBF to resume the release of data.

"While we see media reports by another association seeking an urgent release, we reiterate that the TRP case is a sub-judice matter and the investigations are on-going. Statements made by accused or witnesses during the process of investigation or trial are not judgment. No one other than the Hon’ble Courts can sit in judgment and decide the matter," Sharma said in the letter.

NBDA has demanded that BARC must put in place strong processes that can mitigate potential manipulation and interference in the system or else it will be unfair for the TV news industry.

Sharma pointed out that various internal audit exercises were started by BARC either under guidance of the IBF or on their own, but all of which are yet to be concluded and examined. "Issues pertaining to them are yet to be addressed in a manner acceptable to all members," he said.

It may be recalled that BARC had commissioned the Acquisory Forensic Audit on manipulation of data. The Acquisory report revealed rampant manipulation on the outlier exclusion level, where the final data of Republic TV was more than the raw data in several weeks in 2017. During the same period, Times Now’s data was reduced to the tune of 60% despite having the proof that both channels were resorting to landing pages and dual LCNs to artificially increase their TRPs.

After the TRP scam broke on October 8, 2020, three more audits were commissioned — Interim report of Sarath & Associates (commissioned at Mumbai Police’s behest), Deloitte’s proposal for audit of BARC (at IBF’s behest) and Audit by Mazar on bribe paid by BARC (at BARC’s behest).

The NBDA President said that the news genre has been impacted the most because of the statistical distortion in the ratings and for BARC to become an essential metric and an independent rating agency, it needs to regain credibility with news broadcasters, news buyers and, above all, news consumers.

"You will understand that while it is hurting each one of us news broadcasters. However, we all want the systems and process to be completely cleaned up and started afresh on a clean slate. BARC is an industry organisation and has extensive obligations towards the industry as a whole that it needs to be responsible for. The reputation of the organisation has taken a very severe beating and we all are cognisant of the same," Sharma wrote.