In the campaign film, conceptualised and created by the in-house team of Star Sports, Ranveer Singh, a hardcore Premier League fan himself, plays the role of a supporter 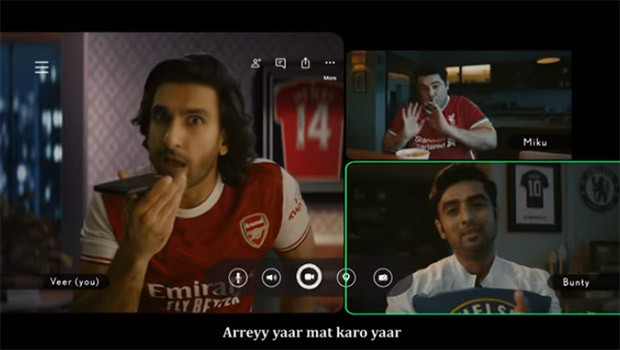 The 29th edition of arguably the most entertaining football league in the world begins on September 12, 2020, just seven weeks post its last edition. Liverpool will have to fight to retain their title as they battle their first games against the newly promoted Leeds United before heading to Stamford Bridge for ‘Sunday Night Football’ against Lampard’s Chelsea that has reinforced its ranks during the transfer period. Fans can experience ‘Sunday Night Football’ on Star Sports Select and Disney+ Hotstar VIP that will celebrate the biggest games and unfold the greatest rivalries.

In the campaign film, conceptualised and created by the in-house team of Star Sports, Ranveer Singh, a hardcore Premier League fan himself, plays the role of a supporter who is excited to watch the match along with his friends on Sunday nights. The Bollywood superstar even pulls a fast one on one of his friends to make sure he too gets to watch the match, albeit at the cost of losing out on a cosy warm date.

Premier League ambassador in India, Ranveer Singh, said, “Like millions of other fans here in India, I cannot wait for the start of the 2020/21 Premier League season and Star Sports’ ‘Sunday Night Football’ is going to be an essential viewing for me and many of my friends. I will be cheering my beloved Arsenal and looking forward to watch thrilling football throughout the League each week, and see who will challenge Liverpool’s crown this season.”

Premier League Director of Broadcasting Paul Molnar said, “Our Indian fan base is extremely important to us – we have millions of incredibly loyal supporters who follow the Premier League and our clubs week in, week out and we are always looking for new ways to connect with them. Star Sports India has been broadcasting the Premier League for over a decade and has played an important part in engaging fans with the League, our clubs and players. It is great to see our official ambassador Ranveer Singh come together with Star Sports to share his love for the Premier League in this new campaign, which captures the passion of our fans in India.”

The Premier League showcases some of the most competitive and compelling football and is the most-watched league in the world. The 2019/20 season saw an 18 percent increase in viewership on Star Sports Select and Disney+ Hotstar.

With some thrilling fixtures already lined up for Sunday nights, it is sure to be yet another memorable season on Star Sports Select.