Breaking the glass ceiling, batting for gender equality, celebrating womanhood or taking on patriarchy, brands went all out to lend more fuel to women power. Here’re some heart-touching and inspiring campaigns for this special day 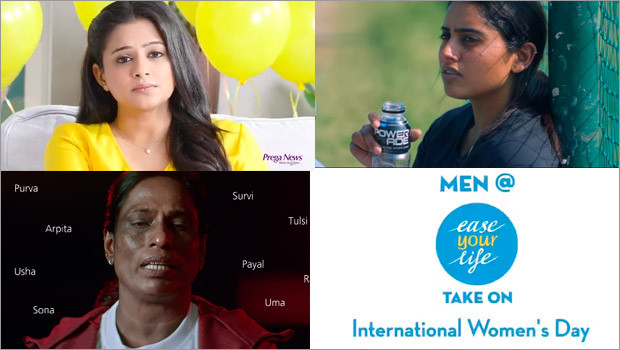 Brands were out in full force to support and inspire women this International Women’s Day. Right from celebrating her beauty, size, diversity in career to combating sexism, brands were celebrating womanhood on their special day in every possible way.

This year, the campaigns varied from promoting gender equality, to showing that power has no gender, showcasing women who are breaking the glass ceiling, women performing various roles and undertaking tasks associated with men and doing them par excellence, and what not.

From special offers to engaging customers on social media, here are some of the ways brands have lent their support in different ways.

The film shuns the concept of colour in gender discrimination, such as ‘blue is for boys’ and ‘pink is for girls’ and instead stands with yellow, which stands for happiness, hope and sunshine. The campaign has been launched across all digital platforms, including the film ‘Thappad’, cinema halls, outdoor, radio and e-commerce platforms for wider reach.

Prega News has also developed a microsite where supporters can enlist and take a pledge for gender equality through the #ImWithYellow campaign.

#PowerHasNoGender, a digital campaign by Powerade reiterates that the power to dream big, train hard to realise dreams and earn as spotlight has no gender. The campaign aims to celebrate young female cricket players putting in hours of practice, every single day at academies and grounds across the country, to achieve their dream of representing India at the Women’s Cricket World Cup.

Indian cricket team’s all-rounder Jemimah Rodrigues and Powerade brand ambassador MS Dhoni kick-started the campaign by inspiring young women to power through and never give up on their dreams.

Powerade is also the official beverage partner of the ICC Women's T20 World Cup. #PowerHasNoGender campaign will be supported by the on-ground presence of the sports drink where young women cricketers of all participating countries will be seen consuming Powerade during training and matches.

Starring PT Usha, the Indian track and field legend, who has inspired a generation of women, Kotak Silk has launched a digital campaign #WomenInspireWomen that salute the millions of amazing Indian women who are breaking barriers, shattering the glass ceiling and inspiring other women in their journey towards achieving their dreams.

On the occasion of International Women’s Day, the Kotak Mahindra Group (Kotak) also announced the launch of Kotak Silk Loans — a range of attractive rates and special offers across categories, specially tailored for women borrowers.

Under Kotak Silk loans, Kotak Mahindra Bank and Kotak Mahindra Prime will give attractive offers on a range of loans catering to a woman’s personal and business requirements, including home loans, personal loans, two-wheeler loans, business loans, loan against property and working capital solutions to its existing and new customers.

The hyper-local service provider Ease Your Life conveys a message of celebrating womanhood every day and not only on Women’s Day in the voices of different men.

The video campaign reminds everyone to make lives easy for women, who are the guiding force that supports the lives of everyone around them and keeps our lives running smoothly 24x7.

Metro Shoes has launched a unique campaign with a new take on patriarchy and stereotyping. Conceptualised and executed by Makani Creatives, the video showcases women performing various roles and undertaking tasks associated with men and doing them par excellence. It challenges the term ‘It’s a man’s world’ and urges the viewers to relook at biases that are deep-rooted in the society and reflect through our words and phrases in daily life. The video concludes by communicating that to ‘change the world, we need to first #ChangeTheWord’.

aLL, the plus size fashion store by Future Lifestyle Fashions Limited, has come up with a bold and quirky approach in their new video campaign. Being unapologetically sassy about her version of the true self, these eccentric women don’t pay heed to trolls they receive and are seen to be more confident in their skin, thus redefining beauty.

With its latest #Pause to Celebrate digital campaign, Lotte Chocopie Pause seeks to honour all women who strive hard to juggle multiple roles every day, everywhere, with hardly a pause moment for themselves. The communication also emphasises the need to appreciate, value and regard their efforts. The heart-warming film showcases the love and appreciation of a mother by her children on the occasion.

The campaign is part of the ‘Lotte Fest’, an initiative that celebrates key festivals and occasions in the country intending to create memorable ‘Lotte Moments’ for all.

The tongue-in-cheek initiative gives a shout-out to women to be themselves in bold bra straps that ask creepy on-lookers to stay away and mind their own business. Through its fun yet hard-hitting promo, MTV strongly advocates the idea of women being unafraid of subjugations and wearing their opinions on their sleeves… straps!

Enamor celebrates all the little ways a woman’s support system pushes her to take a step forward with the campaign #AllForSupport. The campaign is conceptualized by Tonic Worldwide.

Through four relatable scenarios, an entrepreneur looking for funding, a sportswoman nervous about her big match, a working mother unable to find a sitter before a meeting and a bride with a case of the butterflies before her wedding day, the audience is let in on all the difference, just a little bit of support can bring through the campaign titled #AllForSupport.

Godrej Group, a 122-year young conglomerate, came together to celebrate womanhood and their contribution towards different aspects of life. The Godrej Masterbrand thanked its women employees by featuring them in a digital video on gender equality and women empowerment while brands like Godrej Expert Rich Crème and Godrej Appliances unveiled their campaigns around Women’s Day. The group’s other brands like Cinthol Original Soap, Godrej Locks and Godrej Security Solutions rolled out female-led influencers and digital campaigns.

This year, International Women's Day theme is #EachforEqual depicting an equal world is an enabled world.

Tata Mutual Fund launches an educative initiative “#TakeCharge – Women must invest.” The campaign is aimed encouraging women across the country who straddles multiples roles across home, work and their own goals. Being financially stable and independent is most critical. Mutual Funds will help them create wealth over the long term.

TVS Srichakra Limited, rolled out a social media campaign “#TheRealSpecialist” based on the theme of this year’s International Women’s Day and is aimed to acknowledge and celebrate the contribution of each woman and the roles they play in our everyday lives.
The campaign is devised on the premise The Real Specialist - Your every move, moves the world and shows women in the role of driving change, bringing speed, acting as a support system and adding the balance to everything we do every day. It brings in the element that women are striking the right balances, taking bigger strides and achieving better results. The campaign is in line with the TVS Eurogrip’s brand idea of ‘Outlive, Outperform & Outdo.’

Center fresh mints through its new digital film starring Sanya Malhotra encourages women to initiate conversations instead of waiting for the opposite gender to take on this role. Enabled of course, by the fresh-breath confidence from Center fresh mints.

Staying true to its core proposition, the digital film beautifully captures the occasion of a meet-cute, when being fresh breath ready makes all the difference. This campaign sees Sanya, who truly represents the confident, modern, urban woman, narrating her experience of a fun evening with her group of girl-friends. During this party she spots a cute guy and wishes to strike a conversation but pulls back from doing so.  Through the course of the film, she realizes that there is no real reason behind waiting for the man to come up and speak to her and quickly overcomes this hesitation to break the ice herself. This is enabled by being fresh breath ready post consumption of Center Fresh mints.

SBI Life’s ‘Thanks-A-Dot’- breast cancer awareness initiative, continues its journey towards empowering women of India by educating them about early lump detection through simple self-examination techniques. Supported by the Women’s Cancer Initiative - Tata Memorial Hospital, ‘Thanks-A-Dot’ aims at encouraging every woman to make breast health a priority by inculcating a habit of self-breast examination to understand the early signs of lump formation. An easy-to-use self-training kit can be availed free of cost through SBI Life’s corporate website.

To highlight the importance of self-preparedness, SBI Life released a new social experiment digital video, featuring popular women influencers like Srishti Dixit, Eisha Chopra, Kriti Vij and Srishti Srivastava. The experiment takes us through mixed reactions of women trying to recognize objects using the power of touch. While these women are able to guess most of the objects, they are seen to be caught off guard when they touch lump like shapes on the ‘Thanks-A-Dot’ kit. Upon navigating through the ‘Thanks-A-Dot’ self-training kit, all of them make an appeal to the women at large to make personal health a priority and adopt a behaviour of self-breast examination as means to stay prepared.