Featuring cricketing legends such as Sachin Tendulkar, Virender Sehwag, Brian Lara, Brett Lee, Tillakaratne Dilshan and Jonty Rhodes, the series will be played between March 7 and 22 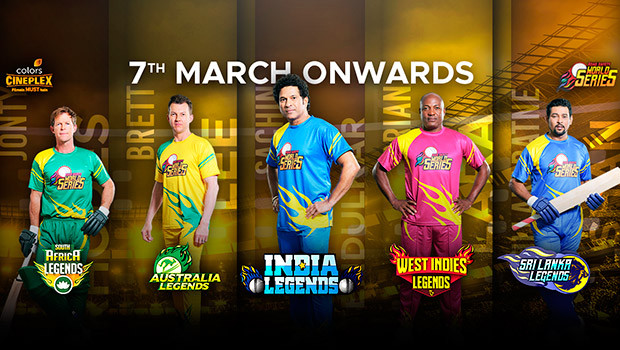 Talking about their strengths, Lavsi said the strategy to tie up with new releases and arranging movie festivals around it helps the channel. “For example, the recent one was Love Aaj Kal, for which we did a Loveria festival. We did Bang Bang festival with Dabangg 3. I think for every important release, we have done some tie-up and some festival around the film. Content selection is done according to the film,” he said.

Nina Elavia Jaipuria, Head, Hindi Mass Entertainment and Kids TV Network, said, “All of this makes it a very robust and enticing platform. It's very well curated, packaged and also very relevant because we have partnered with all the new releases.”

Eyeing to add new viewers to the channel, Colors Cineplex is banking on the T20 cricket tournament ‘Unacademy Road Safety World Series’, a one-of-its-kind cricket tournament that will bring cricketing legends playing for a cause. Sachin Tendulkar, Virender Sehwag, Brian Lara, Brett Lee, Tillakaratne Dilshan, and Jonty Rhodes will play to promote the cause of Road Safety through cricket.

The matches will be played in the T20 format between India, Australia, Sri Lanka, West Indies and South Africa between March 7 and 22 in Mumbai, Navi Mumbai and Pune, and will stream live on Colors Cineplex, Voot and Jio. The Road Safety World Series is an initiative by Road Safety Cell of Maharashtra in association with Professional Management Group (PMG).

Asked what Cineplex aims to achieve with the tournament, Jaipuria said, “The whole idea to do cricket, from that perspective, is to get to that top-three position. Of course, we have a great line-up of premieres coming up along with the cricket, which we will start this fiscal. We have Dostana 2, Brahmastra and we have Viacom Motion Pictures, so there is a big line-up. We have some premiers from the south as well. We have a big line-up for the next year and nothing can stop us from getting where we want to be. Cricket is a step in that direction for sure,” she said.

“We are very sure we will get sampling and new footfall. We will get non-viewers of Cineplex on the channel because of cricket. That to my mind is about saying we already have a fairly decent, loyal base and we will only add to that with the three weeks of cricket that we will showcase,” Jaipuria added.

The tournament will also be live-streamed on Jio. Asked if this will interfere with the channel’s viewership, Jaipuria said the aim is to make the tournament as big as possible and to make it an annual affair.

“It will only supplement because that’s exactly what happened with Bigg Boss. We hit a peak with TV and we also hit a peak on Voot. To me actually, we are giving the consumers the preference of watching on whichever screen they want. We are not constraining them to TV. Voot and Jio will only supplement that cause and make the league even bigger. In the first season, we want the league to be big. The minute it settles down as a league to be waiting for, it will become an annual affair, and we want to make it an annual affair,” she added.

She said the cricket series has been receiving a good response from advertisers and sponsors. There will also be a special pre-game show titled ‘super over’ that will entertain audiences through humour.

The league is backed by a strong integrated marketing campaign spread across various touchpoints.

To bring alive the essence of the sport and energize fans in the country, Colors Cineplex has designed engaging content and network-wide promotions that have seen a playout of 25000+ promos on air across 60 network and non-network channels, including Hindi GEC, Hindi Movies, News, Music, Kids and Regional across India in five weeks.

The Bigg Boss grand finale episode saw a special integration featuring Mohammad Kaif and Harbhajan Singh wherein they interacted with host Salman Khan and the contestants inside the house. A special integrated promo has been created with Nick India’s brand mascots Motu Patlu, to be aired across the channel.

A pan-India outdoor campaign will be released during the period of the league at 300+ sites across Mumbai, greater Mumbai, Pune, ROM, and Delhi along with large format ads across key arterial roads of the country to maximise visibility.

The league’s core message will be taken to cinema halls across 3200+ single and multiplex screens through promos with the release of Baaghi 3.

A partnership with Radio Mirchi has been forged to increase local engagement and conversations around the league across 75 cities. It will include 50,000 promos along with content integration like RJ mentions, score updates and player interviews. During the matches, the brand mascot Teetar Mausi will interact with fans on ground.

On the digital front, the channel is utilising its Facebook, Instagram and Twitter pages by putting across promos, engaging posts on all Viacom18 assets. Curated content will be designed for TikTok, talking about the biggest cricket faceoff that the Road Safety World Series will offer.

The next phase of this will see an upsurge in moment marketing — capturing player moments and leveraging it across social media, thereby propelling the fan engagement. The key moments will include engaging with the players at their practice matches, interesting interactions at the dug-out area and dressing room, etc.

A fantasy league is being introduced on Voot, Jio and Colors Cineplex website wherein contestants can create their league teams and bet on players to win prizes. Play Along in Jio will allow the fans to predict the consequence of each ball, over, no. of sixes and boundaries and scores. All spectators will stand a chance to capture the moment come and share the picture on social media platforms.

Furthermore, the Colors Cineplex website is set to get a massive makeover as the channel readies to host a cricket series for the first time with movies. To engage with the fans, the site will be populated with a lot of player information along with interesting contests, games and gratification.