According to the Nielsen Q2 FMCG report, the FMCG sector will continue to remain flat as the markets continue to face the brunt of lockdowns and supply chain issues. It said migration has led to an increased demand for FMCG products in rural areas

After witnessing a huge de-growth in the FMCG sector from March, the rural market has grown and led to the industry’s revival from June, according to Nielsen. States that have a higher migrant population like Maharashtra, Gujarat and Delhi have seen a negative impact in the market. Meanwhile, migration, along with local Government efforts to revive unemployment, has led to the growth of the FMCG sector in Uttar Pradesh, Bihar, Rajasthan and Uttarakhand. 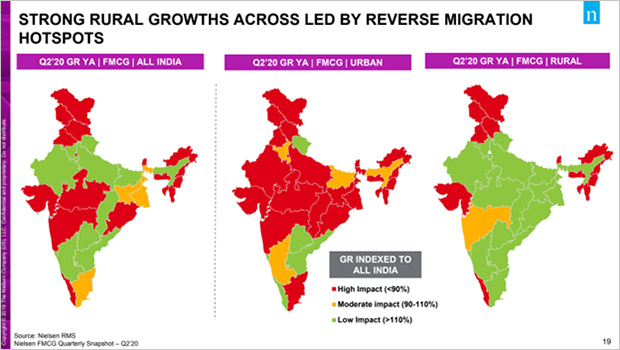 “The FMCG industry in the second quarter witnessed an unprecedented decline of -17.1%, down from a 6.3% growth registered in the previous (Jan-March) quarter. However, with macro indicators, FMCG industry also displayed early signs of revival with the unlock period in June, when the growth moved back to the positive side (4.5% versus previous year i.e. June ‘19) with the eased lockdown restrictions and opening up of retail stores,” said the report.

The sector was severely hit in metro areas as the number of stores closed was almost twice as compared to rural areas.  As a result, the industry sales continued to decline in bigger cities. The smaller towns and rural markets, however, had a strong bounce-back in June, after two months of negative growth during the lockdown. Rural markets, which account for 36% of FMCG sales in India, grew three times of all-India FMCG growth. Meanwhile, Metro cities accounted for 31% of FMCG sales.

“Bharat has outpaced India in the month of June, the revival of the FMCG sector in Bharat has been much higher than the urban or metro parts of India,” said Sharang Pant, Lead Retail Vertical and RMS, Nielsen Global Connect. 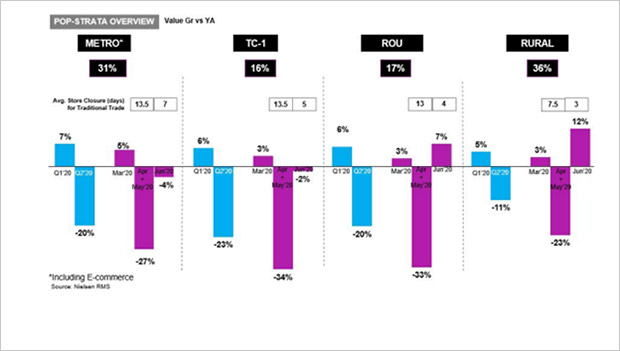 There is also a growth in the east and north due to lower Covid cases and higher rural population. These two zones saw a shift from negative industry growth of April-May to high single-digit growth in June. “Covid cases per million is what impacted the growth of trends across zones, so you would see that east and north, which were less impacted by the pandemic, had a higher contribution from rural and enjoyed better growth in the month of June. 5% for east and 8% for the north,” said Pant. 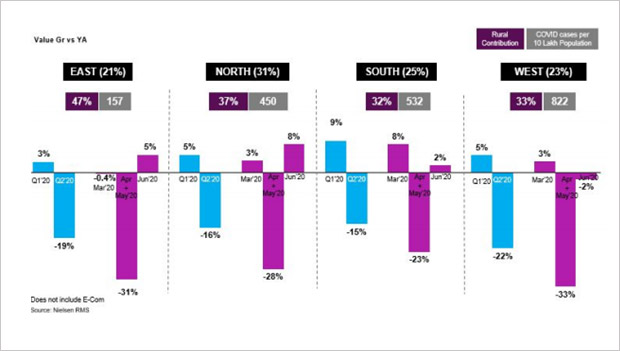 E-commerce and traditional trade bouncing back, second half to see green shoots

The report also said e-commerce and traditional trade have bounced back since June. However, modern trade saw negative growth in June. While consumers chose to spend on essential items like packaged foods during April-May, the non-foods category like personal and homecare is also picking up slowly since June. E-commerce trade was badly hit and grew by only 3% in the months of April and May. 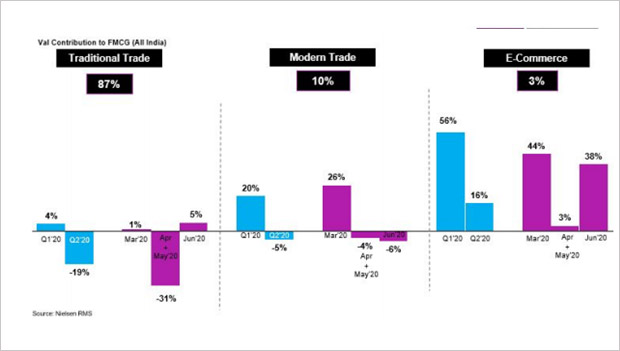 “The IIP dropped by almost 60% and that index has improved to 35% in May, so already you can see green shoots. Inflation has also come down a bit in June and the employment rate is -12 % compared to the global picture of -16% % and that’s where I feel that need for consumption will come in and help us through,” said Pravin Basu,  South Asia Zone President, Nielsen Global Connect.

According to the report, the FMCG category that saw a 6% decrease in the first half of 2020 will continue to witness a flat growth due to various macroeconomic factors like unemployment and inflation. It predicts an 11% increase in job losses in the near future. However, with the festive season coming up in the second half of 2020, it is expected people will increase their spends.