Reliance Industries launched Jio tv+, a content curation platform for all Jio set-top box users. BestMediaInfo.com asks experts about the impact of the innovation on the OTT and TV industries

Reliance Industries has announced the launch of Jio tv+, a content aggregator, in its 43rd Annual General Meeting. The platform offers content from over 12 OTT players such as Netflix, Amazon Prime, Disney Plus Hotstar, Zee5 and Voot on a single screen and requires a single login — addressing the issue of content discovery and multiple logins, the company said.

Speaking at the launch, Akash Ambani, Director, Jio, said, “Jio set-top box was launched with the best OTT content across the world. We learnt that one of the challenges that users faced was to discover their favourite content from the various applications that we had provided. This has given birth to Jio tv +, where we have aggregated all the content from 12 leading global OTT players.”

The platform also makes television interactive for audiences where users can participate in various polls to vote for their favourite TV personality. Similar features will be available for news and music channels. Developers can also build and monetise apps on the Jio store platform.

"For decades, TV content has been largely broadcast-dependent without any interactivity. With JioFiber, we have reimagined this experience and brought interactivity to TV. We believe that two-way communication is the future of TV consumption." 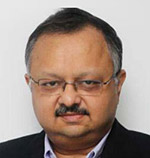 Although the pricing has not been disclosed yet, media experts suggest this might be a big change in the ecosystem. According to Partho Dasgupta, Management Consultant and ex-CEO, BARC India, this only points towards things to come. “The world is moving towards disintermediation with direct access to consumers. Most of the apps are available direct. Hence what remains to be seen is whether Jio tv + makes access more convenient say from a discovery or price point of view. Details are yet not there but it will also be interesting to see how these are priced. The regulator tries to control live TV prices but in this case, all these apps have live TV too and hence whether Jio tv + will affect the cable and DTH ecosystem remains to be seen,” he said. He said the dynamics will change for the homes connected by JioTV fibre broadband.

According to another media expert, this is a path-breaking innovation that improves the user experience. He said this will not have an immediate effect on the cable and DTH industry, but in the long run, the threat could be felt. He also said the platform needs great marketing to make users familiar with the technology.