Broadcasters have been creatively tackling the absence of fresh content and bringing entertainment for the audience in the lockdown. While DD broke records with broadcasting the classic Ramayan, a few networks brought their digital content on TV. But recent BARC results show web shows have not performed well in HSM markets. Does this nail the debate that television and digital have different audiences? BestMediaInfo.com finds out

The lockdown has forced India's leading broadcasters to launch shows originally made for their OTT platforms on TV.

The decision was to bring web shows to TV, along with the rerun of popular TV series, was taken to fill in the airtime as the channels ran out of content inventory after a few days into the lockdown.

While the rerun of popular TV shows has done quite well in terms of viewership, the web (OTT) series have been unable to find audiences among the masses.

Zee TV aired three digital shows, ‘Karrle Tu bhi Mohabbat’, ‘Baarish’ and ‘Kehne ko humsafar hai’, on the back of a Zee5 and Alt Balaji deal. Star network telecast Hotstar original ‘Hostages’ on Star Plus. This is the first time digital shows were on television.

According to BARC’s Week 16 data, the web shows have performed well with the premium audiences. But their performance in the HSM (Hindi-speaking markets) urban markets has not been at the same level. All of the shows dropped compared to the immediate week as well as the pre-Covid period, says the report. 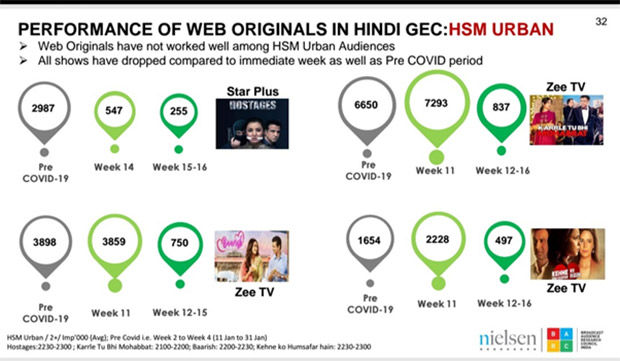 There have been long discussions about whether television and OTT have different audiences and the importance to be catered differently. 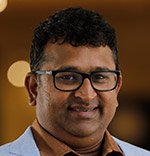 According to Kishan Kumar Shyamalan, Vice-President, Wavemaker India, it is only a matter of time before OTT and Television complement each other and co-exist. “Basis just one report, saying that TV and OTT don’t compliment, would be unfair. India is in an evolutionary stage overall, and content consumption is no different. The TV-watching majority and the relative OTT watching minority are definitely converging and the reason for that is opening up of minds which now demands differentiated content. TV is a 35-year-old habit in India. OTT isn't even 5. But both have been life-defining habits and it is only a matter of time that they will walk together. And while doing so, each will have its individual space in consumer's lives.”

According to Nachiket Pantvaidya, CEO, ALTBalaji and Group COO, Balaji Telefilms, this is a new trend where the TV audience is being exposed to content that was made exclusively for digital platforms.  He said the audience must be given some time to get used to newer content.

“In the current situation, we think it’s a great step taken by the broadcasters to bring OTT exclusive shows for the TV audience and they have taken an immense liking to the streaming content now made available to them. Interestingly, this phase has led to a reverse cycle where we see the content made solely for digital audiences now being aired on television. This marks the beginning of a new trend altogether where the TV audience is being exposed to exclusive content initially available only on digital platforms,” he said.

Pantvaidya said the Alt Balaji shows that are airing on television have been performing well on prime-time slots. “This is a commendable feat for us and other leading players in the OTT industry as the audience for TV and web differ in many ways with the content for these respective platforms being created accordingly,” he said. 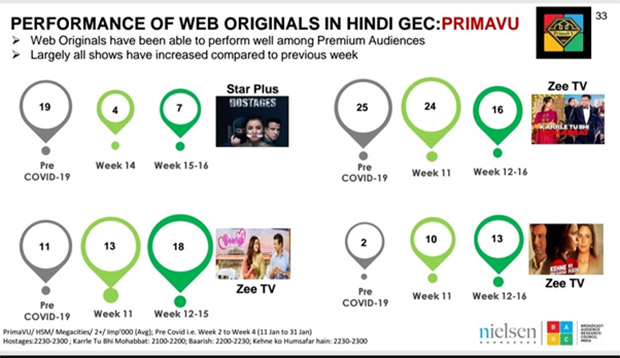 Talking about the reception of digital shows on television, Pantvaidya said, “This change in consumer viewing patterns is reflected in the recently-released BARC report that states that web content is doing very well among the premium audience. As far as HSMs are concerned, we believe that our shows have been appreciated and liked by them as well and will catch up with higher ratings soon. Right now, the situation calls for patience and allowing the audience to accept this transition of content.”

TV consumption in India grew by 38% over the pre-Covid period, according to BARC. While OTT consumption has also increased massively, the audiences for the two mediums might not be the same as suggested by media experts. 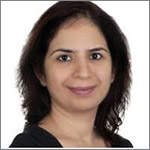 While OTT platforms have been very experimental in terms of content and genres due to its primary audience, the same cannot be said for television. According to Hema Malik, COO, Lodestar, the fact that despite the growth in television consumption if digital shows have not performed well, it speaks loudly of consumer behaviour.

“The storylines are far more progressive than what you see on GEC channels. Some experiments have been done in the past and we have seen that television audiences are definitely different. This is, however, a very expected trend that has followed and not surprising at all. If the show was meant for television audiences, it would have already been on television,” she said.

Malik said the TV audience would need content that is closer to what they are used to. “So if there is some kind of content that is slightly closer, it will be received well. The fact that the PrimaVU audience is different from the rest of the BARC audience is the reason we saw the result. You need mature audiences for certain shows; the audience is used to shows that are loud in terms of storyline. They are not ready for this kind of content right now and this proved it,” she added.