Jibes at rivals on social media have become a trend of sorts for brands. But does it work in their favour? BestMediaInfo.com talks to experts to understand if it is an opportunity or threat for brands and if they need to revamp their social media marketing strategies

If you are on social media, you often cannot resist the temptation of commenting or taking a jibe at other’s posts. Brands are no different.

Be it a friendly banter or a full-blown war of words, social media jibes between brands are not uncommon these days.

Take for example Tinder’s recent post on Twitter, which couldn’t stop brands such as Netflix and Durex from commenting.

Or not to forget how Zomato had almost the whole fraternity on its Twitter wall last year.

Such conversations raise concerns over whether or not a brand can work in isolation with the social media buzz, which sometimes can be irreverent. Or should they just follow the buzz and garner some eyeballs?

BestMediaInfo.com talks to brand strategists and consultants to understand if it is a warning sign for other brands to be prepared for such banter on social media. They discuss how social media banters can both be an opportunity and a threat for them.

Samit Sinha, Founder and Managing Partner, Alchemist Brand Consulting, said it is unclear if such jibes should be categorised as competitive or conversational advertising.

“Earlier advertising and marketing was one for many. With the advent of digital, brands cannot work in isolation. The communication is now many to many. And that is why brands don’t have the control on the narratives,” he said.

Brands have never really lived in isolation, said Pranesh Misra, Chairman and MD, Brandscapes Worldwide. He said effective brands constantly engage with consumers and competitors. “Yes, the frequency and volume of this interaction with competition used to be low — very low —before the advent of social media. Social media has helped bump it up. Like, before President Trump, we had to wait for ages to read the President’s mind. Now we are so spammed with his tweets that we don’t have to wait for his monthly version of maan ki baat,” he said.

Jagdeep Kapoor, Chairman and Managing Director of Samsika Marketing Consultants, said, “Brands cannot work in isolation anyway but definitely in a social manner. On social media, by its definition only, such conversations are bound to happen. However, it is important for the brands to be able to balance between various elements of media whether conventional or non-conventional. Social media has to be interactive and brands need to understand that not everyone is going to be friendly with them on the platform. Being deft, witty, and quick is not enough. Brands should know when to speak on social media and when to shut up.” 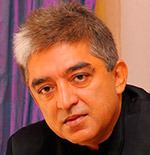 Brand strategy specialist and founder of Harish Bijoor Consults Inc., Harish Bijoor said, “Social media encompasses businesses, consumers and media of physical and digital kind. The definition of social media is broader than traditional media. This means anybody who is on the medium has the right to participate in the great global social dilutes.”

But does that mean brands can go on with sparking debates and mock at each other? Or do brands need to draw a line and be more mature on social media?

We all remember the time when Flipkart’s Sachin Bansal took a jibe at Alibaba’s plan to enter India.

Taking a pot shot at a particular brand can easily be perceived as a rivalry between two brands.

“Brands via such conversations should rather focus on consumers and not on the competitor because the consumer gives business and competitors take it away. Also, as a part of social media, one of the elements to respond is being silent. People love mature brands and they can easily judge who is debating what and who are getting away with some brownie points or cheap thrills. This doesn’t last long. Appreciate your own brand and let consumers do the same rather than depreciating other brands,” he advised.

In contrary to this, Bijoor said, “This cannot be perceived as immature. Social media is and meant to be an immature medium. Traditional medium is more mature and curated media. Curated media can be mature and be boring. However, social media can be immature, irreverent, and can poke one another’s eyes out. There are no such rules here and I don’t think there should be any.”

Sinha said being mature or indecent while commenting entirely depends on the custodians of the brand and its philosophies. Even before social media, competitive advertising used to happen. There cannot be any policy for a brand on where to stop or draw a line while commenting on competitors, Sinha said.

Opportunity or threat:  what is the outcome of such banters for brands?

Bijoor said such conversations in fact are more interesting because they are engaging. It gives life to brands and makes them more animated. It captures eyeballs and presents an opportunity for brands.

“I don’t think it harms anyone. Important point to remember is when you look at social media, the audience is young, irreverent and in the eye. This audience doesn’t think of anything as wrong. What audience thinks is important. It’s not what brand thinks is important,” he added.

Kapoor, explaining what it may reap for brands in future, said those who use social media positively and maturely will benefit and it will be well-accepted by viewers and audiences. The one who constantly mock at others over a period of time will be avoided.

“Do not get into the situation of a slugfest trying to deprecate others. Once in a while is understandable but for no rhyme and reason, attacking others is not social media,” he said.

Sinha, however, said it is an opportunity to be able to touch something topical and interesting. It can be a lot of publicity for the brand very quickly and inexpensively.

Do brands need to revamp their social media strategy?

Kapoor said brands need to learn to highlight their qualities instead of pulling others down.

“The consumer is a very sensible person. Bringing down others doesn’t reflect very well and it backfires. Making a point just for the sake of a conversation, a mid-air fight, doesn’t make sense. Constantly bickering about someone else is not being appreciated by the consumers,” he added.

Brands need to understand this cannot be a marketing tool on which they can have a full control over, said Sinha. It carries a high risk as well. In such cases, narratives can go out of control. And if a brand doesn’t have a controlled narrative, it can make life difficult for them, he said.

Sinha said strategies in such scenarios cannot be defined as they depend on the circumstances. But every brand needs to have a set of protocol in terms of how to respond in such scenarios. Response to a bad consumer review or a competitor’s remarks should be well thought as everything is now in public space. For a brand, there should be a policy for having a designated custodian or person to comment on social media. In such an absence, it can get dangerous and chaotic, he added.

Tags: Social media banter Boon or bane for brands
More from this section