Our first brand TVC '#BeyondTheEdge' is wild and risky, but we held our nerves and nailed it, says Shankar NS of Asus India

Unlike regular advertising in the laptop category, where brands talk about product features, Asus India and its creative agency FCB Ulka have taken to the storytelling route in its first TVC to metaphorically promote the features of its new Zenbook Pro Duo

Ad films in the laptop category are usually either very product and features-oriented or profiles consumers for user-experiences. Not taking the regular advertising route, Asus India launched its first full-fledged 360-degree campaign, which is clutter-breaking and inspired by the expedition conducted by Captain Ferdinand Magellan, a Portuguese explorer who first circumnavigated the earth. Before that, the world was considered flat.

The campaign conceptualised and executed by FCB Ulka aims at positioning Asus Zenbook Pro Duo as a premium, technologically superior and innovative laptop brand. It is the world's first laptop with a 4k second screen that creates an opportunity for enhanced multitasking and productivity.

The 'BeyondTheEdge' TVC campaign tells viewers to go beyond boundaries to achieve the extraordinary in life.

Giving more details into the campaign’s insight, Shankar N S, Product Marketing Manager, PC and Gaming, Asus India, said, "The core thought of the campaign was, when you go beyond boundaries you achieve the extraordinary. This is inspired by a true event, an expedition conducted by Captain Magellan, a Portuguese explorer. This spirit of being fearless, of crossing boundaries and achieving what has not been done before, is at the core of what this TVC stands for."

Set in the backdrop of the 1500s, the film starts with the sailors setting out in the deep ocean to address unanswered questions. When the sailors in the lower deck discover that they are approaching the edge of the world, panic spreads like wildfire. Amid the commotion, some sailors abandon the ship while one seeks counsel with the captain who's positioned on the top of the masthead with his telescope. He alone seems composed as he takes his ship beyond the edge. 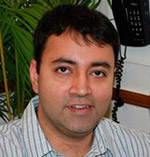 Kulvinder Ahluwalia, President, FCB Ulka, said the agency needed to give a sense of scale and aspiration to the brand in an authentic manner as it is Asus's first-ever TVC campaign.

He commented, "The product itself gave the breakthrough in the market, the real innovation was in the second screen, and this is where the campaign idea leapt. A dramatic reveal of this innovation was what we began seeking and after exploring many themes came the creative crack of what happens when content crosses from one screen to another—going beyond the edge and what could be more epic than the journey where the edge is crossed."

Creating a campaign at such a magnificent scale like this and taking a route less travelled in advertising of the laptop category, is a massive risk from the brand's end as the making of such large-scale films require a considerable investment as well.

Shankar answered, "It's a unique ad in the PC category. We needed to break the clutter with something that is wild and unique. It was a risk since it was our first TVC but we held our nerves and nailed it. The budget was tight from day one, but we believed in this idea of 'going beyond the edge' and stuck to it till the end."

Talking about the uniqueness of the campaign, Ahluwalia said it challenges the norms by taking a higher ground — of going 'beyond the edge'. It talks to those who believe in doing things others would be afraid to. It encourages people to take risks and go beyond their boundaries to achieve something extraordinary.

"Laptop communication is typically very product and feature-based. It profiles the customers and communicates the role of the product in their lives. This campaign is unique because of its storytelling by taking a different approach and focusing on a single differentiator, giving it a metaphor with epic scalability," he added.

Song of the internet video with Nikhil Chinapa:

It took four months for the campaign to go on air after the initial brief. The TVC garnered more than 24.4 million views in five days of the launch across social media. Shankar concluded, "We aim to disrupt the way we communicate to the end customer. All brands make ads, but only some stay with you forever."