Despite positive reports, a few industry connoisseurs feel the TV universe has gone down after the NTO regime. BestMediaInfo.com speaks to industry experts to clear the perception 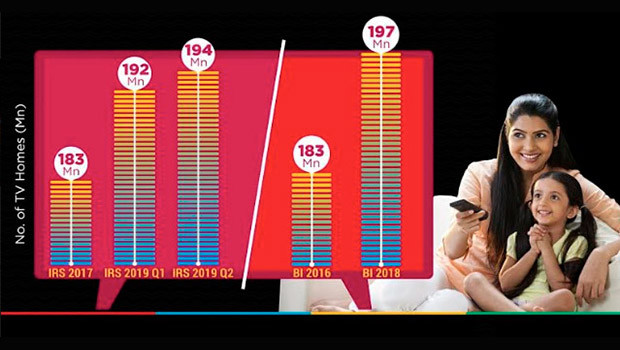 After the Telecom Regulatory Authority of India (TRAI)’s new tariff regime (NTO) was implemented, speculation was rife on the future of the broadcast industry and the relevance of television as a medium in the consumer’s household.

But a recent IRS study conducted after its implementation shows TV homes have continued to rise. According to IRS 2019 Q2, TV homes registered a growth of 1.04% to reach 194 million against 192 million TV homes in IRS 2019 Q1.

A TRAI report also says DTH players such as Tata Sky, Dish TV, Airtel Digital, Sun Direct and Reliance Digital TV recorded a growth of 2.8% in their subscriber base in the first quarter of 2019 compared to only 1% growth in the previous two quarters.

Despite the positive reports, some people, on the basis of reports by distribution platform operators (DPOs) given to broadcasters, are claiming that the TV universe has gone down after the new tariff regime.

BestMediaInfo.com spoke to a few experts to understand the claim.

An expert said the NTO offered consumers the right to choose the channels they want and as a result there was a fall in channel subscription but this doesn't mean a slump in the TV universe.

"When DPO offers data of their connections to broadcasters, they don't give the number of TV homes, saying that TV homes are gone down. After NTO, we can reduce or increase the number of channels that we subscribe but we won't remove television altogether," the expert said.

Another industry observer who also chose anonymity said that it was nothing but a case of under-declaration by DPOs.

A leading broadcaster reflected the same sentiments, stating that subscription revenue might have gone down but there has been no adverse impact on the TV universe. "TV still remains as the primary mode of entertainment in majority of Indian households; there might be a shift in consumption pattern but it doesn't mean TV homes are reducing or TV subscribers are falling," he said.

A leading distributor said the fall in TV subscription was mainly because auto-renewal subscription, pre-paid payment or digital payment systems were not in place among local cable operators like that of DTH players.

"Cable was always post-paid. So, on the first of the month, the operator has to visit the subscriber's houses to collect money, come back to register in the system and activate the box. This activity might take five to six days and so there will be a blackout for five to six days. So, until the system of auto-renewal is implemented, they will face problems of blackout. This is why these subscribers are not reflected in the active report and it seems the TV universe has gone down," the expert said.