With the cricketing extravaganza kicking off in England and Wales, a lot of brands have given into this frenzy and launched various campaigns to cheer the Indian team 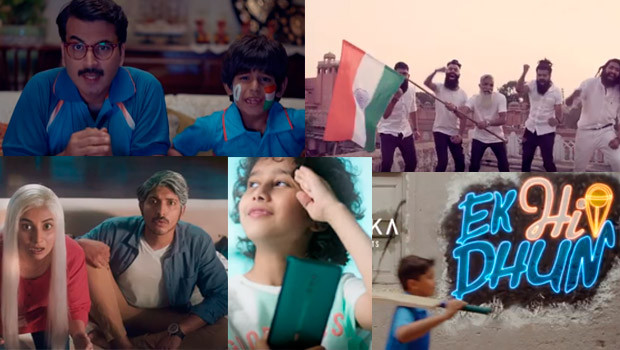 Who doesn’t know that cricket is a religion in India? That it’s worshipped and celebrated with much fanfare across the country, cutting across age, gender, caste or creed? With the ICC World Cup 2019 under way from May 30, it’s a trip full of fervour even for brands till July 14.

Quite a few brands have released communication related to the coveted tournament and to pump up the spirit of the men in blue. BestMediaInfo.com takes a look at some of them.

Ariel, the premium detergent brand from the house of P&G, is out with an emotional, appealing and nostalgic campaign around the World Cup, reinforcing the faith in Team India that we can repeat the 2011 victory.

The campaign captures moments from India’s victory in 2011 and states that it’s time for everyone to keep their lucky jerseys ready and wear them again while cheering for India and hope that the magic will rub off this year too.

Ariel’s #2011Dobara takes viewers down memory lane when India won the World cup in 2011. It makes them relive the anxiety, hope, fear, cheer, joy, pride and celebration that all Indians experienced during the final match that was played on April 2, 2011, after which Team India lifted the Cricket World Cup after 28 years.

The film touches the sentiment that we as Indians are superstitious by nature and we consider things/tokens/people to be lucky for the team/match. Ariel’s new campaign hopes to repeat the magic of 2011 and at the centre of all this is the lucky jersey that people hold so close to them. This jersey needs to rework its charm but before that it needs to be washed with Ariel to remove the stains that followed the win — stains of cake, cold drinks, wine, sweat, etc. Ariel believes if everyone brings with them a little luck with their lucky jersey, India might just bring back the World Cup. In this journey, Ariel ensures clean and stain free jerseys (ready to cheer) as it gives best stain removal in one wash.

Smartphone player Oppo unveiled a groovy heartbeat song ‘Jeet Pe Apna Haq Hai’, upping the ante for Team India. The upbeat track echoes the winning ways of the Indian Cricket Team and resonates with the effervescence of ardent cricket fans through their heartbeats.

Getting released as a part of Oppo’s unique ‘India Give Your Heartbeat’ campaign, the song demonstrates Oppo’s efforts in uniting millions of fans across the length and breadth of India, through the Billion Beats app. ‘Jeet Pe Apna Haq Hai’ has been composed by music director duo Meet Bros and will have fans grooving to a funky signature step to cheer Team India.

Oppo invites cricket fans to showcase their passion for cricket by contributing their heartbeats through the Oppo Billion Beats App. Following which, thousands of collected heartbeats have been used to create the foot-tapping heartbeat song. The song reverberates with the heartbeats of fans and leading cricketers like Rohit Sharma, Jasprit Bumrah, Kedar Jadhav and Shikhar Dhawan.

‘Jeet Pe Apna Haq Hai’ aims at reinforcing the winning capabilities of Team India to bring the trophy home and proliferate the ongoing excitement for the series.

Leveraging digital platforms, Oppo aims to increase the engagement with cricket fans and amplify excitement levels with ‘Jeet Pe Apna Haq Hai’. With the song, Oppo will also be enthusing consumers across the country to ace their signature step on platforms such as TikTok with the challenge #OppoBillionBeats.

With World Cup frenzy comes the palpable tension as India gears up to face the strongest teams of the tournament. Building on this realistic insight, Godrej Expert Rich Crème Hair Colour has unveiled two interesting digital films with a fun take on the stress levels of high voltage cricket matches and the problem of greying hair. The brand aims to build awareness of the crème hair colour range with contextual messaging through these films.

Conceptualised by Creativeland Asia and Godrej Expert brands’ team, the films are quirky and dwell on the popular saying ‘stress will make your hair turn grey’.

The digital films feature a couple and group of friends watching India’s face off with the strongest cricket teams. They all are completely engrossed in the matches and look extremely tensed. As the match progresses, the tension mounts with each passing moment. We see a close-up of their faces and strands of their hair begin to turn grey. Suddenly, there is a voiceover, saying, “Tension se baal safed?”, to which the people nod sheepishly and the Godrej Expert Rich Crème Hair Colour pack appears on the screen, colours their hair shiny black with a swift upward swipe.

Godrej Expert Rich Crème Hair Colour started streaming the digital films on multiple platforms, and will continue to be played throughout the World Cup season.

FMEG player Syska Group has unveiled its new campaign, Sound of Celebration #EkHiDhun for ICC Cricket World Cup 2019. Through this campaign, the company is celebrating India’s biggest sports festival. The video has been launched on Syska’s social media platforms and the song has been composed by Teenu Arora and Schbang.

This exciting new anthem drives the message of how cricket is a sport that is born in the gullies and has been part of every Indian’s childhood. The campaign ‘Sound of Celebration’ has been conceptualised around cricket’s celebratory sounds such as the sound of bat striking the ball, the sound of stumps falling, the sound of cheer in the stadium etc. Syska has united these sounds to create that one iconic sound that is filled with enthusiasm and passion.

Through the introduction of this new campaign, Syska has also plugged in its products such as Syska Boom Box Bluetooth Speakers BT670, HSB3000 Sound Pro Bluetooth Headphones & HE2000 UltraBass Earphones in the video.

Energy storage solution company Livguard, dealing in automotive battery, inverter battery and solar panels, has unveiled its latest campaign #LeAaoGhar to cheer team India. Since ICC Cricket World Cup is held every four years, every individual looks forward to the world’s most viewed sporting events with enthusiasm and excitement of hoping to bring back the cup back home. Keeping this spirit among Indians high, the brand has taken an initiative of ensuring an interruption-free viewing experience for the viewers to watch team India bring back the glory home through #LeAaoGhar campaign.

Through this short digital film, the brand focuses on the emotions of every Indian across varied walks of life, be it a school-going kid, an army officer or a corporate employee connected with their family (home) and reminiscing the moments spent with their loved ones. The film, through different montages and visuals, depicts how students are eagerly waiting, employees leaving their offices early and army men travelling back to the familiar comfort of their ‘ghar’. All the instances showcase a common motive and that is watching the World Cup together with their families back home.

The campaign has been creatively planned with an objective that every Indian can have uninterrupted viewing of the World Cup and support team India in their objective to bring the cup back home after eight years.

As a part of World Cup campaign, Livguard is offering its consumers seamless viewing by giving a warranty extension by eight months on purchasing inverters during this World Cup (till July 14). Also, the brand has taken an initiative to tackle customer issues through call assistance on their toll-free number (18001024138). With this offer, the customers can avail of this service on any brand of inverter and inverter batteries during the World Cup season. If the customer’s problem cannot be resolved through the call assistance, a service executive from Livguard’s team will visit them wherever a service centre is located.

With the world’s biggest cricketing tournament gaining pace, the cricketing fever across India is touching its peak. World over, for Volkswagen, sport has played an integral part in their business. It not only brings in unity across people, but also displays passion, inspiration and excitement. Keeping this spirit in mind, Volkswagen India launched a special Cup Edition for its carlines — Polo, Ameo and Vento.

This Cup Edition reflects the fever of cricket; adorned stylish new leatherette seat covers and chrome badge. Adding to its sportiness are the alloy wheels and body graphics.

With the Cup Edition being a symbol of fandom and sportsmanship, Volkswagen, a brand that personifies German excellence, launched this edition by celebrating the joy of getting support from unexpected places- in this case, a football-crazy Germany.

Thus was born, #GermanyCheersForIndia. Conceptualised and executed by the DDB Mudra Group and supported by PHD India; this one of a kind, multimedia campaign has brought Germany and India together over the sport of cricket; by bringing in German support for Team India.

Kickstarting the campaign on May 27, Volkswagen India published a teaser film on its social pages; featuring the highlights of the Cup Edition in visuals and an enthusiastic cheer for Team India as a background score.

Following this, the brand involved legendary German football player- Thomas Muller. Muller tweeted a photo of himself in a blue jersey, with his wishes for the Indian cricket team with the hashtag #GermanyCheersForIndia. He tagged the Indian captain Virat Kohli who has been a long-standing supporter of Die Mannschaft, the German National Football team.

To fuel the cheer further and to widen the fan reach, the agencies looped in Indian cricket icons Harsha Bhogle and Shikhar Dhawan, who responded to Muller’s tweet with messages of appreciation.

The movement was further supported with a corporate website revamp, print, radio, and outdoor legs; accentuating the Cup Edition carlines while using #GermanyCheersForIndia.

Thomas Muller’s tweet alone has garnered more than 15,000 re-tweets till now. #GermanyCheersforIndia has trended on Twitter for four hours on the day of his tweet, with a reach of more than 300,000, over 213 million impressions and 85% positive sentiment.

Introducing the Cup Edition. Our tribute to the spirit of sports and its ability to unite people across countries. Join in the cheer as #GermanyCheersForIndia ????????#WorldCup2019 #VWCupEdition #Volkswagen #VolkswagenIndia pic.twitter.com/Jqe4Z0DCLz

Consumers can participate in the campaign by simply giving a missed call on 85019-85019 and get a chance to win an all-expense paid trip to watch the world cup live in England and Wales. The 360-degree campaign will run across print, radio, outdoor and digital mediums.

The campaign will be supplemented with a high-energy music video that personifies ‘India’s Largest Fan’ and the dream of watching the World Cup live in England and Wales. The high-octane song has been written by Swanand Kirkire, the music is by Shamir Tandon and is sung by Benny Dayal. The audio visual really brings to life the spirit of cricket and the experience of India’s largest fan.