The campaign, created by Publicis, aims at changing stereotypes and encouraging us to wear new clothes this festival of colours by offering heavy discounts on retail brands 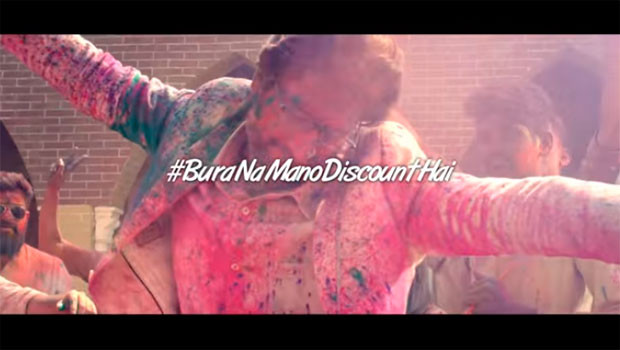 Future Group’s retail fashion discount chain Brand Factory has launched a new campaign for Holi, aiming to break a stereotypical habit -- that of wearing old clothes during the festival of colours.

The brand has announced huge discounts of up to 70% this Holi with its #BuraNaManoDiscountHai campaign. The campaign encourages people to buy and wear new clothes on Holi by making use of the discounts.

The campaign challenges the norm that yet remains in touch with the essence of Holi. Brand Factory is providing amazing offers on all brands associated with them such as, Vero Moda, Pepe Jeans, Wills Lifestyle, Wrangler, Giny & Jony, Arrow and many more.

Roch D’Souza, Chief Marketing Officer, Brand Factory, said, “Holi traditionally has been the only festival where we wear old clothes, we took that as an insight and wanted to encourage everyone to wear new clothes. Brand Factory plays the perfect enabler since we are the only fashion destination that’s on discount 365 days. The film stays true to our space of being quirky and delivering the message in an interesting narrative.”

The digital campaign has been launched via a film that showcases a prisoner who is all set to come out of jail after years. He is gifted new clothes which he wears and turns to set out free. He insists on staying in prison, afraid that his clothes would be spoiled because of Holi. The jailer informs him that he can avail of huge discounts on clothes for 365 days by shopping from Brand Factory. The prisoner then happily leaves from jail in a heroic manner and enjoys getting sprayed with colours. The ad is created by Publicis.

Ramakrishnan Hariharan, Head of Creative, Publicis Ambience, said, “At the onset we knew there would be a barrage of colourful ads during Holi, so we decided to make something that stands out. Much needed in this age of mega-clutter. Also, Holi is revealed only much later in the film, in a thoughtfully crafted suspense narrative, so the audience remains intrigued throughout. It was pure fun working on this one. Grateful to all who made this happen.”