Who can forget Nokia and its famous slogan, ‘Connecting People’. It was more than a tagline; the brand leveraged it for decades because it was something mobile phone users could relate to. But much has changed since then.

Two years ago, Nokia staged a comeback in India, a market it dominated for years. Today, HMD Global Oy is the exclusive licensee of the Nokia brand for phones and tablets. The brand has even come up with a new tagline, ‘Aaj better, Kal aur bhi behtar’, and almost every marketing or advertising campaign that the brand has launched in the recent past centres around this thought.

A few days ago, HMD Global announced the launch of Nokia 7.2 and Nokia 6.2 phones. The launch was planned with the intention of catching up with the Diwali festive season. The brand is using influencers to talk about the new products. And as part of this campaign, Nokia released a series of short videos featuring stand-up comedian Kenny Sebastian.

“We had a very good start; the net promoters score has been among the best we have had for our products. And we are really excited about it,” says Ajey Mehta, Vice-President and Region Head, APAC and India, HMD Global.

In fact, the brand is very positive about this festive season and is not deterred by the economic slowdown. “Smartphone, as a category, is somehow immune to this kind of economic downturn. It is more like a product that people basically run their lives on. Hence, I don’t see that much of an impact as far as our business is concerned,” says Mehta.

“So far, this festive season has been good for us. And there are a few more days left with Dhanteras and Diwali coming up. So, I really look forward to some more positive results,” he adds.

As far as deciding the advertising budget is concerned, it depends on the product and the campaign for brand Nokia. “For us, marketing is very central to whatever we do because the consumer comes first. We will spend on traditional media (TV, print) as well as new-age media (digital, social, community). Going forward, we will also work with influencers to spread the message,” says Mehta.

Being a game changer

Today, the smartphone market in India is growing at 8-10% by volume and is dominated by Android. In the last few years, consumers have felt the hit of planned obsolescence with almost no software and security updates by most Android mobile OEMs. This means smartphones get obsolete soon after one has unboxed it. Additionally, it’s been a spec-race which beyond a point isn’t differentiating enough for the consumer.

Brand Nokia understood these consumer pain points and is offering two years of software updates with access to latest innovations from Google such as Digital Wellbeing and Google Lens across the portfolio, and three years of monthly security patches across the entire portfolio of smartphones.

“While the industry is driving obsolescence of the hardware, we believe that once you buy a Nokia phone, you can keep it for a much longer period because we focus on the experience throughout the lifetime of the product,” says Mehta.

There are only 40 smartphones which comply with Android Enterprise Recommended (AER) norms in India. Nokia leads the choice with 16 such smartphones. 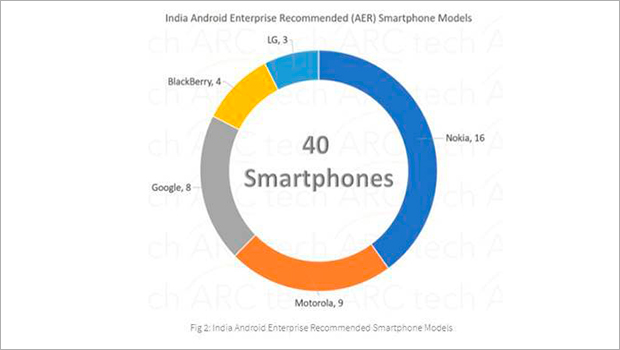 The brand is also not deterred by emerging players such as Xiaomi that recently claimed to have sold 100 million smartphones in a little over five years. “This is a highly competitive industry. We completely rely on our product philosophy, i.e. design and craftsmanship. We put a lot of effort in designing our products. We focus on real-life experience. Nokia 7.2 is a strong imaging phone – it can click in low light as well a day light,” says Mehta adding, “In the smartphone category, we have a way to go. I am really excited about 2020 because we have got a very strong product line-up, which I believe can make a difference to the Nokia brand in the coming future.”

Even ‘feature phone’ is a sizeable base, and for brand Nokia it is an attractive proposition because the brand is among the leading players in the category.

In terms of demographics, the millennial continues to be the prime TG for the brand as three quarters of Nokia phones have been bought by the millennial. So, they are the ones whom the brand will continue to target.