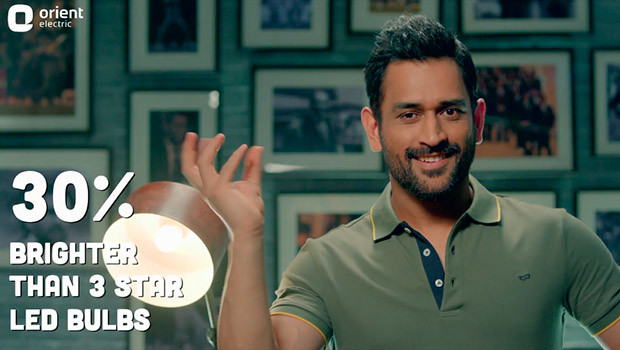 Anshuman Chakravarty, Head Brand and Corporate Communication, Orient Electric Limited, said, “We were the first Indian brand to receive BEE 3-star rating in 2016 for our LED bulbs and once again, we are the first to have voluntarily adopted BEE 5-star rating. The campaign tries to increase awareness about the benefits of switching to BEE 5-star rated LED bulbs, which deliver 120 lumens per watt and are 30% brighter than BEE 3-star rated bulbs.”

“The new TV commercial urges people to switch ‘Haq Se’ to Orient’s highly efficient 5-star rated bulbs. MS Dhoni has a longstanding association with us and therefore he was our natural choice for this campaign,” Chakravarty added.

Mayur Hola, EVP and ECD, Contract Delhi, said, “Orient Electric has emerged as a brand leader as well as a thought leader in the LED lighting category. In the cluttered lighting category, most conversations revolve around cost savings and energy efficiency. Orient’s differentiator is that their LED bulbs are 5-star rated and brighter at a time when other brands only really meet the government’s 3-star mandate. So, we decided to deposition 3-star rated LED bulbs by labelling them ordinary. Light-hearted and clear, the messaging drives this home with a tongue-in-cheek song accompanying it.”