BestMediaInfo.com has a look at a few campaigns that show how brands are coming up with new-age ideas and redefining the meaning of the festival 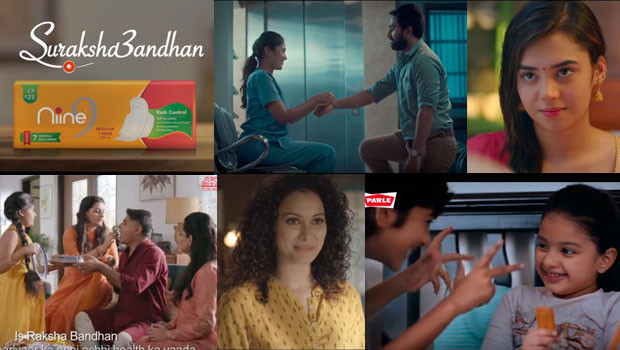 It is that time of the year again when brands gear up to show the unique bond between brothers and sisters on the occasion of Raksha Bandhan. Gone are the days when the festival signified sisters tying a cotton thread around brothers’ wrists, praying for their well-being and the brothers in return promising the safety of their sisters. Brands are now coming up with progressive ideas to redefine the meaning of the festival that celebrates the bond between brothers and sisters. BestMediaInfo.com brings to you some of the trending campaigns:

Gits Food, an instant mix company, has come up with a heart-warming campaign. Titled #ThankYouBhaiya, the digital film encourages viewers to express gratitude towards their bhaiyas – the watchman, liftman and office boy on the occasion of Raksha Bandhan.

In the video, a girl is seen gifting Gits gulab jamuns to her bhaiyas, who are not directly related to her. They are the ones who ensure her safety, comfort and security. The fundamental message of the video is to appreciate these everyday heroes who are neglected more often than not.

Parle Products has released the second of the five ad films under the #YouAreMyParleG campaign on the occasion of Raksha Bandhan. The digital film has been conceptualised using crowd-sourced content and beautifully captures the beauty of a brother-sister relationship.

The video takes us through the everyday bickering in a brother-sister relationship. Conceptualised by Thought Blurb, the campaign, showcases how all these quarrels and fights only add love to the bond.

Fathers play a comprehensive role of a provider, caretaker, problem-solver and assurer of the family and that is why his health and overall well-being comes as the top priority for the entire family. Taking this thought forward, the film opens in a festive setting with a conversation between a little girl and her aunt (bua), who has come to tie rakhi to her brother (the little girl’s father). In an attempt to remind her brother of his earlier health promise, instead of sugary sweets, she feeds him healthy quinoa ladoos. She puts a fitness band on his wrist instead of a regular cotton rakhi, while referring to it as a ‘Smart Health Rakhi’. She then reiterates that his health is not merely his own, but the entire family’s responsibility.

Cadbury Celebrations always comes up with heart-warming Raksha Bandhan ads. This year too, Ogilvy has used its best creative brains to show the subtleties of a brother-sister relationship.

Instead of taking the path of clichéd celebratory scene, the ad starts with the sister in an angry mood as his brother has no time to celebrate rakhi because of his cricket practice. The brother, who is in a hurry to reach practice ground, asks his sister to tie the rakhi quickly. The sister gets surprised when her brother gifts her a Cadbury Celebrations, which he bought with his saved money instead of buying a bat for himself.

Honeywell’s digital film conceptualised by The Womb showcases the caring side of an elder brother who understands and supports his sister and her professional commitments.

The film starts with a tensed guy walking around the corridors of an operation theatre. The viewer gets the impression of his closed one being in the OT. In the end of the video, it is revealed that the guy is waiting for her sister who is a doctor by profession and was busy in an emergency operation. The campaign inspires brothers to support their sisters in every phase of her life.

Niine has launched a path-breaking campaign video wherein brothers empower their sisters by guarding them from the taboos of menstruation, with the tagline: Manao #SurakshaBandhan with Niine. It encourages brothers to give the gift of menstrual health, hygiene and dignity to their sisters.

The video starts with a monologue of a girl who mentions all the times a brother protects her sister. The video ends with an important message for the brothers. It insists them to shield their sisters from the taboos of menstruation and gift them a pack of sanitary napkin this Raksha Bandhan.

IndiaiStore suggests that there is no need to wait for a special occasion to buy an iPhone. The ad is a part of the campaign which conveys that there are all-year-round EMI plans available on the website.

The video shows a light moment between a brother and a sister.  The brother gifts his sister not waiting for Raksha Bandhan as he got an EMI benefit. The video has already garnered 22million views on YouTube.

Ferns N Petals has been coming up with emotional campaigns very year. This year too, the brand has taken a step to mend the broken relationship between a brother and a sister.

Mochi takes a humorous take on Raksha Bandhan. Instead of going the emotional route, the ad shows the fear of being bro-zoned on the festival.

Conceptualised by Makani Creatives, the video shows the fear instilled in the minds of the guys during this festival. They try to hide in every nook and corner of the college. But when a guy comes out with his smart Mochi shoes the girls just forget about tying rakhi.

DHL, an express services provider, launched a heart-warming campaign on the occasion.  The ad starts with a sister complaining to her brother about Raksha Bandhan gifts. The brother promises her to give the best gift this year. But, instead, the sister surprises her brother by her presence at the doorstep.

Brand Factory, a fashion chain by Future Group, took a different route this Raksha Bandhan. Instead of showcasing the usual brother-sister bond, Publicis Ambience, the creative agency for Brand Factory, has come up with a fun and quirky video to show how a brother plays a larger role in a sister’s life. It’s easier for brothers to impress all his sisters with Brand Factory.

The campaign, #BrotherLikeNoOther, attempts to celebrate those brothers who help their sisters chase and realise their dreams that are often shirked by society. The campaign has received an overwhelming response of more than 6.5 million views across its different social media platforms.