Apart from this block, the channel plans to launch 25 more shows this year. There are 8pm, 9pm, 10pm and weekend morning and weekend evening slots 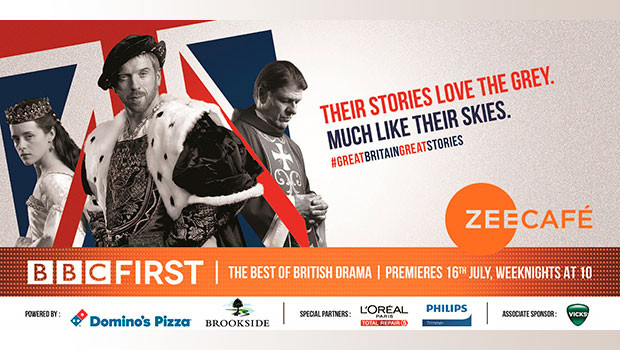 Following the good response to last year’s BBC First programming block, Zee Café has decided to bring the content back with 12 shows for 12 weeks. Some of them are consecutive seasons of the last year’s shows. In association with BBC Worldwide, the programming block will start on July 16 and will be telecast Monday to Friday at 10pm.

The channel has plans to launch many more new shows this year. There is an 8pm, 9pm, 10pm and weekend morning and weekend evening slots. The channel will launch nearly 25 more shows, apart from BBC First.

The shows include Doctor Foster Season 2, Top Of The Lake Season 2, Maigret Season 2, Paula, Wolf Hall, Unforgotten, Broken, In The Dark, Burton and Taylor, The Inceptor, Born to Kill and The Collection.

Speaking about the success of last year’s block, Aparna Bhosle, Business Cluster Head, Premium channels, ZEEL, said, “We took a chance with the block last year. It did bring to us the much required male audiences set, since the channel was largely female skewed before the BBC First block. The programming block balanced the viewership to 52:48 skewed towards females from a 60:40 earlier. In the week of its launch, the TSV of the 10pm time band doubled (from 3 minutes to 6.3 minutes). Our reach increased by 26% with about a lakh additional viewers. We received 15 million impressions on digital with our hashtags trending. Having seen the success of last year’s block, the advertisers have flocked the property this year, which is quite encouraging for us.”

The channel had launched only one British show between last year’s BBC First block and this year’s stand-up comedy show called Live at the Apollo. The show was selected for a peculiar reason. Bhosle explained, “I chanced upon the stand-up comedy format and started looking at the American and British shows in the genre. With American stand-up comedy, there isn’t a single line without abusive language. Now, how much would I have ‘muted/ beeped’ all these words, and then it won’t have made any sense. But the British comedy came out to be equally classy, was funny and it didn’t need bad language to be funny.”

The channel had been able to hold on to the extra audiences that it gained during the last edition of BBC First, the only hiccup being a switch-off of the channels on Den Networks. The channel suffered the switch-off in January this year, but is now back on the platform about four weeks ago and the audiences’ have stayed on the channel. Bhosle quipped, “While content is the king, so is distribution.”

Last year, while launching the debut edition of the programming block, Bhosle had said that the network is toying with the idea of bringing BBC First, twice a year. However, it didn’t happen. She explained why, “I would love to do that. But we have a very tight schedule. It is in October when we decide the line-up for the next year and we already knew that we were packed. I didn’t have space to do it.”

As for the second edition of BBC First, the show will be telecast for binge-watching over the weekends a few weeks after the first airing is over. British programming appears only for an hour at the 10pm slot from Monday to Friday, along with 10am repeat slot. The property has got powered by sponsors as Domino’s and Brookside, while Phillips and Loreal are the special partners. Vicks is the associate sponsor.

Some of the shows will be available on Zee5, behind the paywall.

As for the marketing of the show, the channel has devised a marketing campaign #GreatBritainGreatStories. The outdoor campaign has already rolled out in Mumbai, Delhi, Chennai and Bangalore. The promos will take spots across ZEEL network and some other networks too. The channel has a special focus on social media, because all the consumers are on social media. There will be a print campaign too. It will also present a sneak peek into British culture by hosting English tea parties in key media offices.